As clinchers go, it didn't exactly rival Burt Lancaster and Deborah Kerr frolicking in the Hawaiian surf in "From Here to Eternity."

The Calgary Flames couldn't be accused of slipping into the playoffs through the back door, but it certainly helped that the Colorado Avalanche inadvertently left a side window unlocked and a light burning.

While Calgary closed out the season with a 3-2 decision Saturday to the utterly impotent Edmonton Oilers (who hadn't won a game in regulation since Feb. 22), the white-hot Avs were doing the unexpected at the Pepsi Center, tumbling to the nothing-to-play-for Nashville Predators. A Calgary loss coupled with a Colorado victory would've made the closer, Game 82, in Denver worth everything. 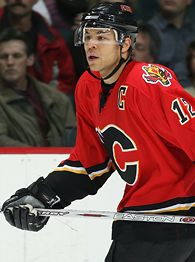 But it was not to be.

So the Flames, last season's Northwest Division champion and No. 3 seed out of the West, clinched the eighth spot and will face the Detroit Red Wings as they stumble into the postseason on a four-game losing streak.

"Doesn't matter. Blank slate," Flames coach Jim Playfair declared days before his NHL playoff baptism. "All season long, we've battled to give ourselves the chance to win the Stanley Cup. Now it's here. We start fresh with Game 1 on Thursday.

"Everything is brand new."

In a sense, it is. Many of the participants from the Flames' 2004 second-round upset of the Wings are gone -- Brett Hull, Steve Yzerman, Brendan Shanahan and Derian Hatcher for Detroit; OT killer Martin Gelinas, goaltender-runner Ville Nieminen and frizzy-haired defensemen Mike Commodore for Calgary.

The Wings have retooled with future Hall of Fame veterans retiring or moving on. So reliant on defensive flop sweat and the tag-team duo of Miikka Kiprusoff and Jarome Iginla, the Flames are more of an offensive threat these days, scoring more goals than the reputedly high-flying Detroiters during this regular season.

In Hockeytown, fans are convinced the Red Wings are more than ready to repel this Flames challenge. Players are getting healthy at the right time and the team is bulked up for the run by Dominik Hasek in goal and Todd Bertuzzi to add size and muscle.

Five games, maybe six, at the outside.

"Oh, we're the underdogs all right," Calgary center Craig Conroy said. "But we like it that way."

In Southern Alberta, meanwhile, despite the late dip in form, there remains a quiet confidence. After all, the Red Wings were supposed to stomp all over those poor, overmatched Oilers a season ago.

"What Edmonton taught us," Conroy said, "is that anything's possible."

For the record, the Flames are relishing this opening-round Detroit option instead of facing more grinding teams like Anaheim, Dallas and San Jose, or their own chunk of Kryptonite, the Nashville Predators. The 113-point, best-of-the-West Red Wings suit them just fine.

"Why? For a variety of reasons," replied defenseman Robyn Regehr, who is doubtful for Game 1 due to a knee knock. "Some of us ... have already had playoff success against them. You look at the season series -- two games apiece. We know that team. We know it's going to be a long, tight series, but we also know how to play against them."

• The Flames believe the Wings can be worn down, that they built up those 113 points playing in a flimsy division, bossing around the likes of Chicago, Columbus and the pre-turnaround, pre-Andy Murray St. Louis Blues.

• They Flames are certain that in Iginla, they have the one man capable of piggybacking his team through turbulent waters as he did, memorably, three springs ago.

• The Flames are confident in the goaltending matchup, the glacial Kiprusoff vs. the frenetic Hasek, going their way.

Among those who believe Hasek may be vulnerable is left winger Kristian Huselius, a revelation this season after piling up 34 goals and 77 points. After all, The Dominator, for all his brilliance, has a reputation for being, uh, somewhat erratic.

"He didn't face a lot of shots this season," Huselius said. "We've got to change that. We've got to get in his face, throw a lot of traffic in front, screen him. He won't like it. We want to upset him. Make him work. Wear him down.

(From personal experience, this is an indisputable fact.)

Everyone will be watching to see how Detroit's top guns step up. The quicksilver Pavel Datsyuk hasn't scored a goal in 26 playoff games, dating back to the 2002 season. By coincidence, Game 5 of that series was also Hasek's last playoff win.

For all its superb regular-season success, Detroit has been staggering disappointments the past three postseasons.

There is, meanwhile, a theory this Flames team lacks a ruthless single-mindedness compared to the 2004 squad that came within a game of the Cup. Back then, they were as much fun to run up against as a chunk of itchy, pink fiberglass insulation. Under Playfair's thumb this season, the club was maddeningly inconsistent in the area that became the franchise's identifying trait -- hard defensive graft.

Are these Flames corrosive enough to grind the Wings into mulch, the way the prohibitive underdogs from 2004 did? General manager Darryl Sutter satisfied the braying jackals who demanded more offense after falling short three springs ago, bringing in Alex Tanguay, Daymond Langkow and Huselius. But in doing so, has he strayed too far from the Flames' identity? Those are the questions being asked of the Flames.

"Whether you're the eighth seed or the first, it doesn't matter now," Iginla said. "We respect Detroit for the season they had. But we still believe we can win this."

George Johnson, a columnist for the Calgary Herald, is a regular contributor to ESPN.com.