LONDON -- So, Erik Janssen was at Buckingham Palace and Queen Elizabeth II came up to him started talking about hockey and the NHL. In fact, the queen got so wound up talking about the game, she touched Janssen on the wrist -- twice. Seriously. The queen of England, a puckhead. Who knew?

When Janssen, a local sports TV producer for a network in London that broadcasts live NHL, Major League Baseball, NFL and NBA games, tells this story, there is generally one response.

"Usually people say, 'Yeah, right. You were talking to the queen about hockey. Right,'" Janssen told ESPN.com on Friday as the Anaheim Ducks and Los Angeles Kings prepared for Saturday's seminal regular-season opener at O2 Arena. 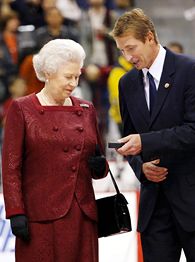 But this is a true story. And with the NHL in town to play its first regular-season games in Europe on Saturday and Sunday, Janssen has had many chances to tell the tale.

A Montreal native who has been in England for 17 years, Janssen was invited during the 2004-05 NHL lockout to a reception at Buckingham Palace with a large group of Canadian businesspeople and celebrities.

Before they met the queen, the group was instructed by palace staff on how to behave. They were split into groups of about 10, and were told to stand in a horseshoe shape and await the queen's approach. They were not to touch the queen under any circumstances, certainly no hugging, kissing or trying to snap off a few frames with a camera.

When the queen approached Janssen's group, she asked one man what he did. Currency exchange. Yawn.

When she asked Janssen what he did, however, she became quite animated upon discovering that he broadcasted NHL games on Channel 5 in London.

"She said, 'Oh really,' and takes one stride forward toward me," Janssen recalled. "[Prince] Philip and I had to watch your show a few times," the Queen said to Janssen, explaining they had been honing up on hockey before a trip to Canada. During that trip Her Majesty was asked to drop the puck at a Vancouver Canucks game at GM Place.

"So, then she goes over and taps me on the wrist and says, 'but listen to this ,'" Janssen said. And the queen went on to explain to Janssen that after the puck was dropped, it was carried away by someone from the team. She inquired about the puck and was told that it would be put in a glass display case somewhere in GM Place.

"And then she taps me on the wrist again," Janssen said. "And she says to me, 'You don't think I was too harsh and demanding, do you Erik?'"

No, he told her, he'd have done the same thing.

"She chuckled with laughter in a polite, royal way," Janssen said. "Meanwhile, all these eyes are on me, everybody's thinking, the queen is making body contact with somebody."

As they chatted, Janssen recalled an iconic picture of a bloodied Maurice "Rocket" Richard handing a puck to Her Royal Highness before her coronation back in the 1950s. And, sure enough, Queen Elizabeth II told Janssen this wasn't the first puck she'd collected.

"She turns to me and she says, 'I actually have two pucks here at the palace. Not bad for an old woman like me,'" Janssen said.

Finally, the Queen moved on and began chatting with an oil executive from the Orkney Islands. But she later returned to Janssen and asked him if he got a lot of viewers for his show, which is on late at night because the games are carried live from North America.

"So she said to me, 'Philip and I have one problem with your show, it's just on too late,'" Janssen said.

He told the queen that he would ask for earlier faceoffs back in North America and she chortled royally once more. She also told Janssen her grandson, Harry, watches hockey, too. Or was it baseball? She wasn't sure. But she thought it was affecting his studies.

"And off she went," Janssen said. "And then I turned to the people in my group and said, 'Did I just have a 10-minute conversation with the queen about hockey? Did that just happen?'"