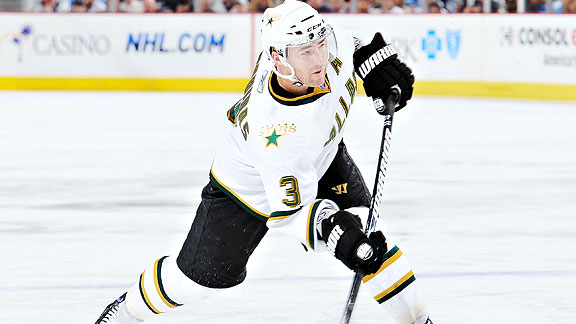 Jamie Sabau/Getty Images Stars defenseman Stephane Robidas is a player who should be on your NHL radar.

Stephane Robidas' face is a window to an NHL career.

The face tells the story of a career forged the hard way, a career forged against odds and setbacks. Battered and misshapen, it is the face against which teammates can gauge their own willingness to compete and sacrifice. A face that silently asks: "Am I willing to do that?"

"Count the surgeries on his face and you'll know how he plays," Dallas Stars teammate Brad Richards told ESPN.com on the eve of the regular season. "He battles like I've never seen."

We use the term underrated a lot in the NHL. It usually means someone who doesn't get paid a lot relative to the stars, but quietly performs above and beyond the call of duty. But underrated sometimes applies to someone who makes something of an opportunity, however slender, however long it takes.

This is Robidas. All of it.

Even at age 33? Robidas tells us he still worries about his job every day. But then again, the father of two confides he is a worrier.

"I tend to worry about the little things," he told us in a recent interview.

Will his kids do well in school?

Will the babysitter take care of his kids?

It may come as little consolation to Robidas, but one thing he doesn't need to worry about is the respect he has garnered, not just in the Dallas locker room but around the hockey world.

When we asked a handful of players (past and present), analysts and executives about who they considered to be underrated players, they were uniform in their praise of the undersized defenseman.

"Very positive. There is only one thing he doesn't possess: height," said Craig Button, who was an executive in Dallas between 1992-2000 and is now a national analyst. "He is a great competitor. He is smart. He is skilled. He can play defense and offense. He can play in any situation and under any circumstance. He plays to win and finds a way to make a play of some sort that helps push the game's outcome more to the side of his team. In other words, I love him and the way he plays."

Another NHL executive familiar with Robidas said simply, "I love him as a player and as a person."

When GM Joe Nieuwendyk arrived in Dallas at the end of the 2009 season, he knew Robidas only by reputation. Then, one day during practice in late December, Robidas took a slap shot to the face. The bones in his cheek collapsed onto nerves in his face, requiring surgery to pop them back into position. He played the next night.

Those kinds of stories have become his calling card. In Game 5 of the 2008 Western Conference quarterfinals, Robidas took a Todd Marchant clearing shot off the beak and went down. His nose was broken, but Robidas returned with a cage on his helmet and played the rest of the game. In the next contest, he scored the game-tying goal and set up the series clincher as Dallas upset the defending Cup champs. The next season, he played with a broken jaw.

"That's what separates him from a lot of players," said Nieuwendyk, who was also famous for playing through pain during his career. "He's a unique player, there's no doubt about it. He had to scratch and claw for everything he's got. He's had nothing handed to him."

Nieuwendyk figured if there's a description of a hockey player in your handy dictionary, Robidas' picture will be next to it. "He plays with as big a heart as anybody," the GM said.

Robidas is now the second-oldest player in the Stars' lineup, but he hardly exudes a sense of entitlement.

If anything, this time of the year reminds him of the fragility of the moment.

After being taken in the seventh round of the 1995 draft by his home-province Montreal Canadiens, Robidas spent two seasons in the AHL. When he thought he might have paid his dues, he lasted one day at the Habs' 1999 training camp. No exhibition games, nothing. Just a ticket to Quebec City and the American Hockey League. Later that season, he was called up and played in his first NHL game. He was 23. He wondered then, as he has periodically throughout his career, about his place and future. He thought about Europe. But the following season, he played 65 games for the Canadiens.

Over the past decade, Robidas has moved from Montreal to Dallas, briefly to Chicago, and now back to Dallas (where he'd like to end his career). He has been a healthy scratch. He has been on waivers. He also played in the 2009 All-Star Game and was invited to last fall's Canadian Olympic orientation camp.

"All my career, I've learned you're not always on top. It's a roller coaster," Robidas said.

The native of Sherbrooke, Quebec, likes the idea of a assuming an even greater role with a young Dallas blue line. "I know exactly how those guys feel when they're not in the lineup," he said.

Last season, he took in prospect Hubert Labrie. During training camp, when a group of French Canadian prospects were headed back to junior or the AHL, Robidas had them to his house for dinner. "These are such important things that help your team grow," Nieuwendyk said.

Robidas also admitted that he would like to perhaps let down his guard a little bit and enjoy the moment. He recalled that first NHL game and how everyone told him to enjoy it, that a career can go past you in an instant.

Here's hoping he takes that opportunity.

"Underrated" in the NHL usually means someone who doesn't get paid a lot, but quietly performs above and beyond the call of duty. But underrated sometimes applies to someone who makes something of an opportunity, however long it takes. Here's our team for 2010-11:

Patrick Sharp, Chicago: When the Blackhawks were having to dump salary this summer, teams were lined up for a shot at Sharp. No dice, said GM Stan Bowman. Much-loved in the Hawks' room, Sharp was a key part of the team's run to the Cup last season.

Brooks Laich, Washington: A heart-and-soul guy playing with the high-skill set in Washington, Laich doesn't get the recognition his play suggests is his due. He even helped change a woman's flat tire after the Caps were eliminated in Game 7 last spring.

Ryane Clowe, San Jose: Playing in the shadow of Joe Thornton, Dany Heatley et al, Clowe has become a big part of the Sharks' fabric, a 20-goal guy who can deliver in the clutch. He also had 10 points in 15 playoff games last spring.

Mark Giordano, Calgary: Overshadowed by Jay Bouwmeester et al, in Calgary, but does it all.

Sometimes we confuse overrated with being a bad person or malingerer or worse. But we prefer to look at an overrated player as someone who hasn't met expectations based on their skill level or financial compensation or both. Here's our All-Overrated Team:

Alexei Kovalev, Ottawa: So much talent, so much time spent not really having his head in the game. Too bad for the Senators and their fans.

Martin Havlat, Minnesota: Terrific guy, terrific talent, but has not yet been able to marry staying healthy and staying productive despite a whopper of a contract.

Olli Jokinen, Calgary: OK, so it may look like we're piling on the Flames here, but for a player with that much skill and so little to show for it, especially when it comes to delivering in the playoffs, Jokinen has been a major disappointment for a long time.

Jay Bouwmeester, Calgary: Don't mean to pile on after the Michael Peca affair earlier in camp, but for a player blessed with such raw skill, so little has been revealed. Maybe this season.

Bryan McCabe, Florida: He has a big shot, but has seen his game decline since a high point in 2005-06 season despite big dollars sent his way.

Rick DiPietro, New York Islanders: Sorry, that 15-year deal juxtaposed against the 13 NHL games in which he's played the past two seasons leave both us and Islanders fans wanting.

See how all 30 NHL teams stack up for the coming campaign in The Magazine's 2010-11 Rankings. Story