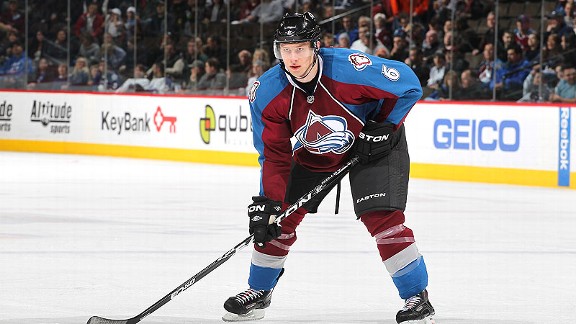 Michael Martin/NHLI via Getty Images With last season's trade behind him, Erik Johnson enters his first full campaign in Colorado.

Avalanche: 10 Things You Need To Know

It sure seems like a long time ago when the Colorado Avalanche were the darlings of the Western Conference.

They made a surprise run to qualify for the 2010 playoffs and gave top-seeded San Jose a real scare in the opening round before losing in six games. In the life of a hockey team, it was a long time ago.

GM Greg Sherman has undertaken a number of radical changes after his team took a giant step backward last season, falling out of the playoff picture early in the season and finishing 14th in the West and second-to-last in the league.

Want to go deeper? ESPN Insider gives you access to player perspectives on each team, plus a breakout player from Craig Custance, key stats to watch and season projections.

1. Long fall
The Avs saw their points total plummet from 95 in 2009-10 to 68 last season. That precipitous fall earned them the second overall pick in June's draft and a chance to select highly coveted Swedish winger Gabriel Landeskog. He joins other top draft picks the Avs have accumulated in recent years, including Matt Duchene.

While no one was prepared to assign Landeskog a roster spot early in camp, his play suggests the Avs may take a chance on bringing in the 18-year-old winger for at least a look-see through the first nine regular-season games. Landeskog had 66 points in 53 games in the OHL last season and added 10 more points in seven postseason games.

Late in camp, Landeskog was given a prime spot to showcase his skills, skating with Paul Stastny and David Jones on what would arguably be the Avs' top forward unit.

2. Between the pipes
Sherman resisted the temptation to reward netminder Craig Anderson with a long-term deal after the 2010 playoffs, even though Anderson had been dynamic for them. It turned out to be an astute decision; Anderson was injured and simply wasn't very good when he returned. The Avs were by far the worst defensive team in the NHL, allowing 3.50 goals per game on average.

But Sherman believes he's found a terrific foundation to turn the tide by acquiring Semyon Varlamov from the Capitals and then signing former Cup winner Jean-Sebastien Giguere. Critics believe Sherman overpaid (a first-round and second-round draft pick) for a netminder who had fallen down the depth chart in Washington. There have been questions with Varlamov's durability, too (he has a history of body core issues). Still, when healthy, he has been a terrific young netminder, and Sherman has rolled the dice.

3. Giguere
So what if Varlamov cannot answer the bell in the way a No. 1 netminder should? Well, Giguere would sure like a shot at proving he's still got game. After being dealt to Toronto and rejoining his old Anaheim GM (Brian Burke), Giguere struggled. He fell down the depth chart and battled injury, but at 34 still has plenty of game left. Beyond Giguere's ability to come in and provide quality starts in relief of Varlamov, Sherman is confident Giguere will provide an important mentoring presence for Varlamov.

4. The blue line
Did we mention how bad the Avs were defensively? Sherman again rolled the dice last season, pulling the trigger on a monster deal that sent promising young defenseman Kevin Shattenkirk and power forward Chris Stewart to St. Louis for former No. 1 overall pick Erik Johnson. The Avs also received a first-round pick and defensive specialist Jay McClement, but gave up a second-round pick. Johnson now becomes the anchor of a blue line that is a patchwork quilt of well-traveled vets and youngsters trying to make a name for themselves.

The much-traveled Shane O'Brien is a nice physical presence if he can stay on the rails, while Jan Hejda is an underappreciated player who toiled in relative anonymity in Columbus. The real upside of this group starts with Johnson and includes big Ryan O'Byrne, Kyle Quincey and Kyle Cumiskey. Because of injuries last season, it's hard to gauge just where this group is at. But it's got to be better than the numbers indicated. It could hardly be worse.

5. Erik Johnson
Smart and physically imposing, Johnson just didn't work out in St. Louis. Maybe it was fate (remember how Johnson wrecked his knee at a golf tournament before his first training camp and missed the entire season?), or maybe the hockey gods had something else in mind for the big defenseman.

"I knew I wasn't playing my best, so maybe I had a little inkling that something might happen, but you really never expect it to," Johnson said. "I kind of describe [the trade] as a dream you're never going to wake up from. Seriously, that's what it felt like. People were shocked by the trade. Just think how the players felt, even more so.

"It was a surreal experience to go through, but something I think that will change my career. … It's nice to be wanted by a team," he said.

Johnson came into camp much leaner and is hoping that will add to his foot speed.

6. The injuries
Much of the Avs' backsliding last season can be attributed to the fact they never played with a full lineup. Whether it was Tomas Fleischmann missing the last half of the season with blood clotting issues or Peter Mueller missing the entire season with a concussion, this was a season from hell. The Avs ended up with 474 man-games lost to injury, the second most in the NHL. Training camp has seen some bumps along the road, too, as Brandon Yip broke his forearm and will be out for at least a month. Hejda missed considerable time with a knee injury during training camp, although he was hoping to get in at least one preseason game and was not ruling out the Avs' opener.

7. The offense
Even with all the injuries and upheavals, the Avs still ended up in the middle of the pack (18th overall) in goals per game and were a respectable 11th on the power play. Assuming better health and the maturity from players like Matt Duchene and Ryan O'Reilly and perhaps Landeskog, there is no reason for a drop-off in scoring. With Hejda hobbled, it may open the door for top defensive prospect Stefan Elliott, the 49th overall pick in 2009. Elliott has impressed with his puck-moving skills and skating in camp.

8. Welcome back, Peter Mueller
Another reason for optimism is the return of Mueller, who was so dynamic after being traded to the Avs from Phoenix at the 2010 trade deadline. Mueller had 20 points in 15 games for Colorado before being sidelined with a concussion that kept him from playoff action. Then, during training camp before last season, he suffered another concussion that cost him the entire 2010-11 campaign. He's back and apparently at full strength, and his presence will give coach Joe Sacco another tool in deploying a promising, young offensive arsenal.

9. Milan's the man
We were a bit surprised the Avs didn't try to move veteran winger Milan Hejduk last season with the 35-year-old approaching unrestricted free agency, but credit Sherman and Hejduk for finding a way to make it work in Denver. Hejduk has spent his entire career with the Avs and his 23 goals last season marked his 10th straight season in which he hit the 20-goal mark.

Originally drafted by the Quebec Nordiques in 1994, Hejduk has remained a constant through the championship days on through this current rebuilding phase. He signed another one-year deal this summer with a $3 million cap hit. Pretty good value for a player who does nothing but deliver the goods.

10. The past is the past
We happened to be in Denver last season when Peter Forsberg began skating for what would turn out to be his last gasp at resurrecting his NHL career. It didn't work out, but the team will retire his jersey at their Oct. 8 home opener versus longtime rival Detroit. Adam Foote, a teammate on those great Avs teams from the 1990s, has also retired. Former captain Joe Sakic is in the front office. Rob Blake has gone on to do work for the NHL. As if there was ever any doubt, it's time to put the past in its place in Denver.

More From The Magazine 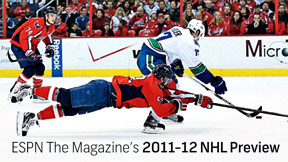 • Custance: Different season for the Caps?

• Photos: Hanging with champs in Boston

• There were more than a few arched eyebrows when Joe Sacco was made to pay the price for the Avs' implosion last season. A year earlier, everyone was singing his praises as he was nominated for the Jack Adams Award as coach of the year, so he knows the mercurial nature of the game all too well.

Good for Sherman to give Sacco another shot at getting the Avs back on track. But after the big Johnson trade last season, our guess is Sacco had better get the team off to a good start if he wants to enjoy continued employment with the Avs. -- Scott Burnside

Best bet: Matt Duchene
With David Jones, Gabriel Landeskog, Peter Mueller and Milan Hejduk, the wingers on the top two lines are still of good quality. That means which line Duchene plays on is not as relevant as it might have been. There is enough talent for Paul Stastny and Duchene to share. Duchene improved in his sophomore campaign and still hasn't hit his talent ceiling. If he jells well with the right linemates, 80 points isn't out of the question. -- Sean Allen

Risky pick: Semyon Varlamov
Varlamov has been plagued by injuries, limiting his value to the Caps and fantasy owners. Injury avoidance is a skill, and it's not an area in which Varly seems particularly skilled. In addition, he's going from one of the league's most dominant teams to a franchise that is working its way back to respectability. Let someone else draft him for whatever name recognition he still possesses. -- Tim Kavanagh

Sleeper pick: Erik Johnson
The 23-year-old got off to a good start late last winter by notching 10 points in his first 15 games with the Avs before hitting a dry spell to end the season. Now that he is familiar with his new squad, Johnson can relax. As the Avalanche's top blue-line option on the man-advantage, the former No. 1 overall draft pick could be on the verge of a career season. -- Victoria Matiash

The offseason signings/acquisitions and departures for the Avalanche: