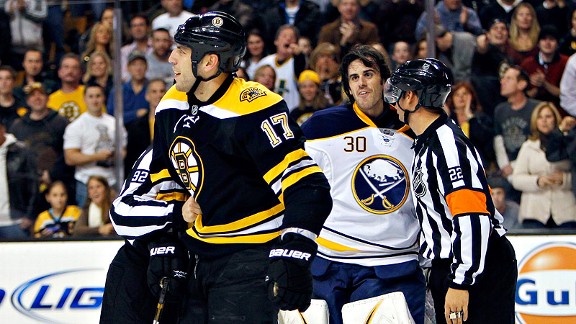 Greg M. Cooper/US Presswire The Sabres focused on adding toughness in the offseason so Ryan Miller doesn't get pushed around.

There was change in Buffalo in the offseason, just not where some fans had hoped.

Head coach Lindy Ruff and GM Darcy Regier didn't get the ax after a disappointing season that fell way, way short of the hype that surrounded this club in the fall of 2011.

Owner Terry Pegula chose continuity over a knee-jerk reaction, and perhaps there's something to be said for keeping the long-standing Regier-Ruff combo in place.

Sometimes when you make roster changes like the Sabres did in the summer of 2011, it takes a long time to find chemistry and truly see the results of those decisions on the ice.

Could this team live up to its 2011 hype this year? I don't see the Sabres as an elite team just yet, but I do see a team that can make the playoffs.

1. Toughened Up
You may remember last season when Milan Lucic of the Bruins ran star goalie Ryan Miller of the Sabres and the Buffalo squad had no answer for the rough-and-tumble Boston side. I'm not saying this was a direct response to that, but, just like the Montreal Canadiens, the Sabres went out and toughened up in the summer. They added tough guy John Scott, who can throw 'em like nobody's business, plus the gritty and underrated Steve Ott. They also re-signed Patrick Kaleta. I don't think the Sabres are going to get run out of too many rinks this season.

2. Will The Kid Stick Around?
The Sabres are intrigued by draft pick Mikhail Grigorenko, who lit up the Quebec Major Junior Hockey League this season. June's 12th overall selection will get a serious look before the Sabres decide whether to keep him around or send him back to junior. With the departure of Derek Roy, the Sabres need to find offense elsewhere and especially need help at center. If Grigorenko shines early on, he might become a permanent fixture.

3. Miller Time
Ryan Miller was hoping to rediscover his Vezina Trophy form of 2009-10 last season, but instead was good but not great for a second consecutive season. He sported a .916 save percentage, down from the sparkling .929 he posted when he earned top NHL goalie honors in 2009-10. To be fair, the team in front of him hasn't played as tight a game nor won as many games over the past two seasons. But he can be just a bit better, and I believe he will be. Head coach Lindy Ruff says he'll start Miller 36 to 38 times out of the 48 games, giving backup Jhonas Enroth an important role in the shortened season. Enroth played in Sweden during the lockout, while Miller did not play.

4. Keep 'Em Together
You can expect the Drew Stafford-Tyler Ennis-Marcus Foligno line to stick together, at least for the start of the year, after their hot run late last season. Ennis, in particular, was sensational in putting up 19 points (eight goals, 11 assists) in 12 games from March 10 through April 3, as it appears the lightbulb went on for the talented 23-year-old from Edmonton.

5. Better Ehrhoff?
After he signed a 10-year, $40 million contract in July 2011, big things were expected from blueliner Christian Ehrhoff. But the German defenseman struggled at times to adjust to his new surroundings, and his production dropped from 50 points with Vancouver in 2010-11 to 32 points last season in Buffalo. His plus/minus also fell from plus-19 to minus-two. Not the kind of numbers you expect for that kind of money. With a year under his belt in Buffalo, the Sabres hope he can relax and rediscover his Vancouver form.

Question Mark: Thomas Vanek
The largest threat to Vanek not returning to a 30-goal scorer is his role on the Buffalo Sabres' offense. The team has many, many forwards vying for scoring-line roles, and Vanek was not on what turned out to be the top line last season. As a second-line player, Vanek cannot hope to be a near-point-per-game player, so fantasy owners would be wise not to be too hasty to pick him up in fantasy drafts. The tide seems to be turning toward the youth for the Sabres, and Vanek, though only 28, may be pushed down the depth chart. All that said, Vanek is a true sniper around the net and can battle down low on the forecheck with the best of NHL defenders. All he needs is ice time and linemates to work with to become a star again.

The offseason signings/acquisitions and departures for the Sabres: