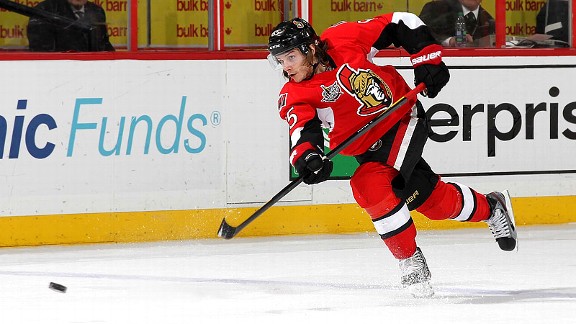 So what do the overachieving Ottawa Senators do for an encore?

Before last season, the Senators were a popular pick to finish last in the Eastern Conference.

Instead, the Sens were the surprise team of the East, grabbing the final playoff spot in the conference and giving the top-seeded New York Rangers all they could handle in a first-round series that one Blueshirts player told ESPN.com ended up fatiguing his team moving forward.

The question is, can the Senators prove last season wasn't a mirage and make it back to the playoffs and beyond this year?

The early consensus among most observers is that Ottawa is primed for a bit of a regression as reality sets in. Just another chance for the Senators to prove everyone wrong.

2. The Sensational Mr. Karlsson
I still believe Shea Weber should have won the Norris Trophy last season, but you cannot take away anything from Erik Karlsson's incredible offensive explosion en route to a surprise Norris nod. (On a personal note: a big thank you to Mr. Karlsson for helping me win the Media Hacks Fantasy Hockey League last season!) The exciting puck-mover is electrifying to watch, and his evolution last season was a big reason for Ottawa's surprise performance. Karlsson did lose his regular defensive partner in Kuba, so we will have to watch how he adjusts on that front. But given his natural talent, I can't imagine a drop-off.

3. Sens In Europe
Led by the likes of Karlsson and Jason Spezza, Ottawa had eight skaters playing overseas during the lockout, and that's no small factor. The difference between those who have played real games the past few months and those just working out in scrimmages on this side of the ocean could be noticeable in some cases. Ottawa gets a bit of an edge here early in the season by having so many players who already have their game rhythm down pat.

4. Alfie, Alfie, Alfie
Was there anything more heart-warming last season than watching the fans in Ottawa during All-Star weekend embrace their captain Daniel Alfredsson the way they did? I honestly believed at that moment that he'd be retiring after the season. I was wrong, like many others. The 39-year-old Sens captain is back for another season, and the NHL is a better place for it. The Sens need to be wary of the compacted, 48-game schedule and make sure they don't wear him down.

5. The Coach With The Right Answers
Paul MacLean waited years and years for a chance at an NHL head coaching job and finally got it last year in Ottawa. Take a bow, Bryan Murray. What a hire MacLean was. He was nominated for the Jack Adams Award and was instrumental in blending the youth and veteran elements on his club in a season that surpassed all expectations. The Senators are blessed behind the bench.

Time-Shares: Craig Anderson
Though Anderson is certainly locked in to the No. 1 spot for this season, the Sens have a pair of good fallback options should he be injured (or if they elect to use a buyout on his contract). Bishop appeared to be ahead in the organization's mind as of the end of last season, but Lehner has been posting better stats thus far while the two of them get their work in for the AHL affiliate in Binghamton. In 20 games, Lehner has gone 13-5-1 with a 1.94 GAA and .944 save percentage; meanwhile, in 12 appearances, Bishop has gone 8-3-1 with a 2.66/.928 split. The brief training camp that will begin this upcoming Sunday will provide another opportunity for a battle, but the team might be leaning toward Lehner on the strength of those relative numbers. -- Tim Kavanagh