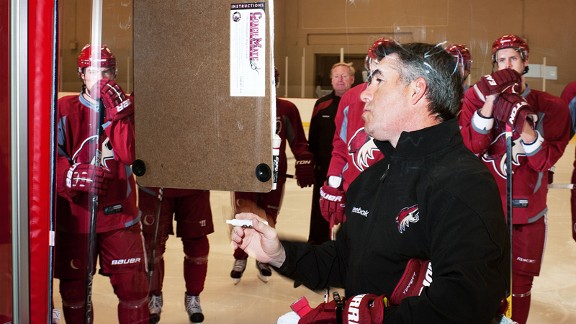 Brian Finke/ESPN The Magazine Can Dave Tippett continue to work miracles in Phoenix once the ownership saga is over?

What Phoenix coach Dave Tippett and GM Don Maloney have done the past three years is one of the more remarkable hockey stories. Talk about lemonade from lemons or chicken salad out of, well, you get it. A ward of the NHL for more than three years with a stringent payroll and ongoing rumors the team is about to shuffle off to Quebec City or Seattle or Peoria (OK, we made that up) at any moment, Tippett and Maloney have established a hockey oasis amid the chaos.

Last spring, the team charged to the top of the Pacific Division for its first division title in 33 years, then advanced to its first-ever conference final before bowing out in a hotly contested series against eventual champion Los Angeles. The thing is, the Coyotes may just be getting better with a talented, deep defense, stellar goaltending and a capable offense.

1. Earning Your Spot
Always enjoy our chats with Tippett because the glass is always half full, as it is for the guys that play for him. Only Mike Babcock has more wins than Tippett since the start of the 2002-03 season (406). Apart from a couple of minor alterations -- Steve Sullivan, Tyler Moss and Nick Johnson -- everyone else who will break camp at the end of the week is part of the Coyotes fraternity and understands what is expected of them. Coming off a first-ever trip to the conference finals brings different challenges, and Tippett is cognizant of making sure the emotions get channeled in the right direction because you can't just step back into the kind of emotional stratosphere of a conference final in Game 1 of the regular season.

"You have to have the mindset [that] you're going to build towards it," he told ESPN.com. You have to earn the right to be a playoff team -- something the team has done three straight seasons -- but having been there doesn't guarantee another spot awaits next May. "You have to earn that right again," Tippett said. That's a message that will be repeated over and over for the 'Yotes.

2. Confidence In Smith
Was there a better story in the NHL last season than the renaissance of Phoenix netminder Mike Smith? Put on waivers the previous year by the Tampa Bay Lightning with his career seemingly at a crossroads, Smith worked diligently with Coyotes goaltending coach Sean Burke and turned in a Vezina-worthy season, followed by an MVP-style turn in the playoffs. Smith won nine postseason games and turned in a sparkling .944 save percentage in 16 starts. His three shutouts were tied for the most of any playoff goalie. During the regular season, he had eight shutouts and his .930 save percentage was fourth in the NHL. There will be skeptics who wonder if Smith can do it again, but Tippett said he sees a maturity in Smith that has allowed him to accept a No. 1 goaltending job in the NHL. "I think there's a new level of maturity there, a new level of confidence, too," Tippett said. "That's going to be a big factor here."

3. Depth On Defense
Quietly, the Coyotes have fashioned an impressive blue-line corps, featuring up-and-coming youngster Oliver Ekman-Larsson and Keith Yandle and fleshed out by a nice blend of veteran savvy and size. The Coyotes ranked fifth in the league in goals allowed per game and will be bolstered by the return of former Coyote Zbynek Michalek, who was re-acquired at the draft from Pittsburgh. Look for Tippett to try Ekman-Larsson with Michalek and Yandle with Derek Morris as his top two units on defense. We recall talking to Tippett last season about the void left when Michalek signed as a free agent with the Pens; now there's a comfort level as he joins a team festooned with Czech countrymen. "It's like he never left," Tippett said. Veterans Rostislav Klesla and David Schlemko round out the top six, but watch for David Rundblad and Michael Stone to push for playing time after continuing to develop at the AHL level during the lockout.

4. Offense Needed
The naysayers will always wonder if the Coyotes can possibly come up with an offense to remain afloat in the highly competitive Western Conference, and it's a valid question, especially with the departure of offensive leader Ray Whitney to division foe Dallas. While the Coyotes were a respectable 18th in goals per game last season -- a nod to the team's balanced four-line attack -- they ranked 29th on the power play. It might be simple to assume that Steve Sullivan, last seen working the wing with Sidney Crosby in Pittsburgh, will slot into Whitney's spot and that's that. And while Sullivan has a similar skill set, Tippett said, he's looking for a step forward from guys like Mikkel Boedker, the eighth overall pick in 2008, who had a strong playoff for the 'Yotes, scoring two overtime winners in a row against Chicago. Lauri Korpikoski and Tyler Moss will also be asked to do more offensively this year.

5. Stability Coming
Maybe it makes a difference on the ice, maybe it doesn't. But if our sources are correct, the final sale of the Coyotes to a group of investors should be completed by the end of the month, bringing to a close a long, miserable chapter for the franchise and the league itself. Certainly, it will be interesting to see what having stable ownership will do come trade deadline time when, in the past, GM Don Maloney has had to get league approval to add salary and, in some cases, was forced to trade players in order bring others back in. More importantly, will new ownership be able to rebuild the relationship that more than three years of uncertainty has put asunder? If Tippett's squad continues to perform as it has the past three seasons, that will go a long way to making this new relationship a successful one.

Mr. Reliable: Keith Yandle
The subject of offseason trade rumors, Keith Yandle would likely become more valuable if dealt to another NHL club. As it stands, the cherished blueliner with the Phoenix Coyotes remains capable of amassing 50 points during a normal NHL season despite a serious absence of weapons up front. Plus, one of the sturdier players overall, Yandle hasn't missed a single regular-season game in three years.

The offseason signings/acquisitions and departures for the Coyotes: