SEATTLE -- Friday night is hockey night in Kent, Washington, an industrial town located 19 miles south of Seattle. It's Pub Night at the ShoWare Center -- where fans can snag 10 tickets, 10 beers and 10 hats for $220 -- but most people at the Seattle Thunderbirds' WHL game against Kelowna are here for the promise of seeing the next big thing.

"One day," says Chris Simmons, a consultant and Seattle resident who is at the game with his two sons. "We'll have our own pro guys to be proud of, and we'll represent. That's the hope, at least."

That hope finally feels tangible. At December's NHL Board of Governors meetings, commissioner Gary Bettman authorized an ownership group to conduct a season-ticket drive in Seattle, invited the city to apply for expansion and set the fee at $650 million.

It was a stunning development, if only for its expediency. (Three years earlier, at a previous Board of Governors meeting, Bettman only invited Las Vegas to run a season-ticket drive; the other steps came later.) Sources say Seattle's ticket drive will begin in February. The goal is for a new franchise to begin play in 2020-21.

But you can forgive a fan like Simmons for exercising caution. Despite Seattle's rich hockey history -- the Pacific Coast Hockey Association's Seattle Metropolitans were the first U.S. team to win the Stanley Cup, in 1917, when they dispatched the defending champions, the National Hockey Association's Montreal Canadiens -- the NHL has only flirted with the city for decades.

Ownership groups surfaced, then disappeared. Arena bids sprouted, but never blossomed. The NHL spurned other logical favorites, such as Quebec City, and added Las Vegas while Seattle still waited at the altar.

"In all of this time, that this city managed not to get a team?" says Jeff Obermeyer, who authored the book "Hockey in Seattle." "It doesn't make much sense."

Then the Oak View Group swooped in. Led by investment banker David Bonderman, Hollywood producer Jerry Bruckheimer and Tim Leiweke, a former Los Angeles Kings and Toronto Maple Leafs executive, the OVG presented a $600 million plan to remodel KeyArena, the one-time home of the NBA's SuperSonics, which was is in desperate need of a facelift. The NHL was wooed. So, too, was the city.

"I don't know if they're the white knight," says Seattle mayor Jenny Durkan. "But we're glad they rode in on their horse."

"The fans there are amazing," Barzal says. "They really supported us, and I bet they'd support an NHL team, too."

"All we need are three things," says John Barr, who runs the popular @NHLtoSeattle Twitter account and website. "An owner, an arena and an available team. Once we have those, and it seems like we finally do, I know the fans will come."

The area actually supports two junior teams within an hour drive of each other. The Western Hockey League's Everett Silvertips play just 30 miles north of Seattle. When the Silvertips and Thunderbirds play at the same time, as many as 12,000 people are attending hockey games in the area at once -- and that's simply to watch juniors.

The city has already shown it can be fervent. The NFL's Seahawks' "12th man" generates buzz, but many Seattleites point to the MLS Sounders as a model the NHL team should follow. Although the franchise is only 10 years old, the Sounders led the MLS in attendance for their first eight seasons, and finished second behind only Atlanta in 2017, while averaging 43,666 per game (the next closest team was Toronto, which averaged 27,647). They consistently sell out CenturyLink Field. The Sounders built their following from the ground up. They host college football-style rallies downtown that conclude with a well-attended march to the match. 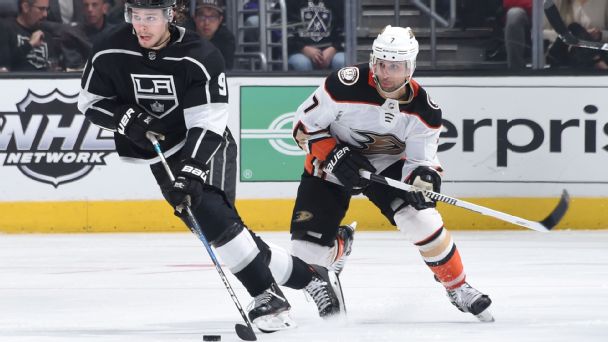 Greg Wyshynski and Emily Kaplan cover trade requests as well as the philosophy behind them, the Andrew Cogliano situation, Kid Rock getting picked to perform at the NHL All-Star Game and much more. Plus, NBC Sports Boston's Joe Haggerty on the Bruins' youth movement and Flyers D Shayne Gostisbehere on why he's annoyed with criticisms of his playing style. Listen »

But, of course, if you're talking about professional sports in Seattle, the sting of the SuperSonics' absence lingers. The NBA team was plucked from Seattle and transported to Oklahoma City in 2008, in large part because its owners could not secure public funding for a new arena. KeyArena was outdated by modern sports' standards. OVG's plan includes creating 2,200 club seats for hockey, and more for basketball, which certainly would be attractive in a city that boasts eight Fortune 500 companies. Amazon's campus is nestled against the arena.

It's especially a shame that the Sonics left just as Seattle was having its moment. A tech boom is heralding record growth. From April 2015 to 2016, for example, Seattle and its surrounding counties added 86,320 new residents, according to a report from The Puget Sound Regional Council.

Durkan is a champion for bringing an NBA team back and believes an NHL team would open the door.

"The Sonics Rising folks and the Sonics deserve a lot of credit, because they kept the idea of the arena alive," Durkan says. "And without an arena, you can't have a hockey team. So by keeping that at the forefront, having it work now that you can have hockey and hopefully basketball, is great."

The city still hasn't foreclosed on the arena -- there is still a possibility, the mayor says, of having two arenas in town -- but she has had "lengthy talks" with the OVG about the potential of bringing an NBA team into the fold at KeyArena.

"I want to make sure whatever deal we negotiate on the arena will enhance the ability to get basketball, not deter it," Durkan says. "I think we can do it."

For now, the focus is solely on the NHL ticket drive. When asked what would happen to the project if the OVG does not meet its goals in that drive, Durkan smiled. "That's not going to happen," she says.

Paul Kim was born in Seoul, South Korea. He had asthma as a child, so his mother signed him up for hockey because she wanted him to be active, and the confines of a rink would protect him from the pollen and allergens outside. Once he stepped on the ice, Kim was hooked. When he was 10, Kim's family moved to Seattle, and his obsession intensified.

He went on to study economics at the University of Washington but in his free time became fascinated by the city's hockey history. He spent hours in the library researching the Seattle Metropolitans. That's when he realized someone held the trademark for the Seattle Metropolitans name, but wasn't using it, and by law, he could challenge for the name.

"I realized hiring a lawyer was expensive," Kim says. So he took on three separate jobs -- at Nordstrom corporate, bartending and hawking T-shirts -- to pursue his case.

The owner of the trademark settled out of court for an undisclosed sum.

"Luckily he understood my intentions," says Kim, now 27. "I was doing it for the good of keeping hockey alive."

Kim has twice organized a visit to Seattle for the Stanley Cup. He's hopeful, as are many hockey fans, that an NHL team will soon follow. And he also knows that if the team wants to be named the Metropolitans, it will have to negotiate with him.

Pamela Bowerman, whose pen name is Jami Davenport, filed an application with the U.S Patent and Trademark Office on Dec. 21 to own the Seattle Sockeyes. That's the name of a fictional team in her romance novels, which include "Penalty Play," "Shot on Goal" and "Crashing the Net." Additionally, a Microsoft attorney is trying to trademark the "Seattle Steelheads."

Another matter of business: determining broadcasting rights. When Vegas joined the NHL this season, it staked its claim to the Northwest. Golden Knights games are broadcast on Root Sports coverage areas in Montana and Idaho; that overlaps with what is considered Seattle territory.

"The Seahawks are really a regional thing here," says Russ Farwell, the GM of the Thunderbirds. "Every weekend you go to the airport, you see people flying in to watch those games. I think they can do the same thing with hockey."

Farwell, the GM of the Philadelphia Flyers from 1990 to 1994, is cautiously optimistic about an impending NHL arrival. He's not threatened by the potential competition.

"Very different price points," he says. "We have free parking. Their parking is probably the price of going to our games."

But he knows ownership can't expect to swoop into town and instantly expect success.

"I think people are real positive because they see themselves as a real big league city, but I don't know if they realize what it is to be a hockey city," Farwell says. "I don't know if there's a real big group [here] that's aware of hockey. That doesn't mean it can't grow to be, and they can't do a good job, but they have some real work to do to make this a hockey town. It's going to need to start grass roots."

Jamie Huscroft and Doug Kirton met in 1990 at a New Jersey Devils training camp. Huscroft went on to play 352 NHL games for five teams; Kirton got sent back to the minors and spent 10 years playing professionally in Germany. They reconnected when they both settled in Seattle and began working at a local rink, Sno-King.

But participation might be capped because of the current facilities. There's no high school hockey in Seattle. Only 12 NHL players were born in Washington state; the most notable is T.J. Oshie (Mount Vernon, Washington) though he moved to Warroad, Minnesota, as a teenager.

"To grow hockey in Seattle it's simple," Kirton says. "We need more ice."

There are only seven ice rinks in the city.

"There's mountains on one side, water on the other, and if you look north to south, there aren't many vacant, six-acre parcels we can snag up," Huscroft says. "Plus, land is so expensive around here, it makes it really hard to do independently."

Last year, the board at Sno-King sponsored two trips. Huscroft and Kirton went on both. They were fact-finding missions, to Dallas and Denver, where the group toured facilities and saw how the Dallas Stars and Colorado Avalanche, respectively, had helped boost youth hockey in their areas.

When the Stars moved Dallas in 1993, there were five total sheets of ice in the area. There was no high school hockey, no travel hockey teams and only 250 registered youth players. Dr. Pepper jumped in to help sponsor, and now, as the Stars celebrate their 25th anniversary season, the area boasts more than 20 sheets of ice, while 14,000 children in North Texas are registered to play hockey.

"It was easy for them because they had all that land, and it wasn't as expensive," Huscroft says of the Stars. "But we have a lot of ideas of how we can get things going here, too."

The new NHL team in Seattle would need to build a practice facility -- ideally on the east side of town -- which would be Stage 1.

"[The Oak View Group] will build a decent-size practice facility right away, and that will have three sheets, so that will be a real injection right away," Farwell says. "It would take one or two of those and then hockey here will take off."

There are plenty of signs that suggest it already has. One of Farwell's players, Donovan Neuls, is a center from Saskatchewan. When he comes home from practice, the host family he lives with peppers him with questions about Seattle's expansion efforts.

"My billets [host family] bring it up all the time," Neuls says. "They're asking me if I know something they don't know. They want to know any news about the NHL team."

All Neuls can tell them for now: "Soon, I hope."