When Nazem Kadri ripped out a chunk of Joe Thornton's beard last month, we'll be honest: We thought it was pretty gross. The multicolored bushel has been Thornton's signature since 2015. Seeing a patch of it yanked from its owner's face, fall to the ice like tumbleweed, then get bagged up by the San Jose Sharks' training staff wasn't something you see every day.

For NHL players, well, it wasn't as novel. Hockey is inherently physical and fast-paced. Combine that with sharp metal blades and the occasional shove and you have a recipe for some nastiness. We asked several players to share the grossest thing they've ever seen on the ice. Warning: This article may not be safe for work, and you definitely don't want to read it on an empty stomach. 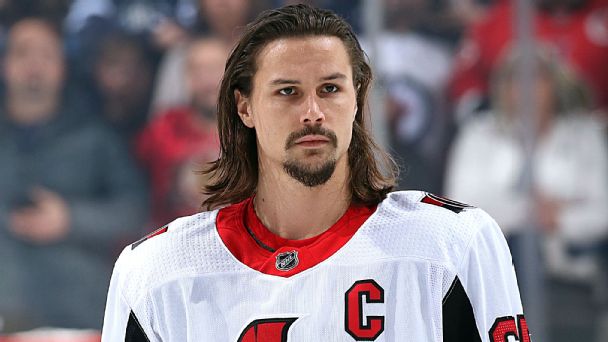 Greg Wyshynski and Emily Kaplan survey the "non-rental" options at the trade deadline and take a look behind the curtain with TSN's James Duthie at what hosting TV coverage of the big day is like. Then we hear from J.T. Brown of the Ducks, and Madison Bowey of the Capitals alongside his father, Will. Finally, a look at the Hart Trophy race, and a fan vents some Olympic frustration to the ESPN On Ice "rant line." Listen »

Connor Murphy, Chicago Blackhawks defenseman: In the world championships a couple of years ago, we were playing Finland. Patrik Laine had long hair at the time. We got into a scrum, and guys were just hugging in the scrum. Somehow I got his hair stuck in my glove. I went back to the bench to put my mouthguard in my mouth and I had his hair in my glove. A little bit I felt in my mouth. It was absolutely the most disgusting thing I've ever had happen.

Anders Lee, New York Islanders center: I accidentally stepped on Casey Cizikas' wrist last year. It was during a game, along the boards. Personally, that was the worst I've ever seen. I felt terrible about it. He had a big gash and had to go out right away. I'm pretty sure he made it back out there that game though.

Mark Jankowski, Calgary Flames, center: Back in college [at Providence], someone got hit with a puck in the ear. As soon as he got back to the bench, I looked over and I was like, "Oh my god." I can't even explain what his ear looked like. It was like ripped in half, hanging open. I was like, "Dude, you need to go see the trainer." He went and got stitched up. He might have missed the rest of the game, he might have come back. I don't remember.

Vinnie Hinostroza, Blackhawks winger: Honestly the grossest thing was one of my teammates accidentally spitting on me when he was skating by. And the spit just went right in my face.

Alex DeBrincat, Blackhawks winger: Someone tried to spit on me in a scrum, once. It was in the OHL. He missed, thank goodness.

3 years of braces were all for nothing. Became a real old time hockey player last night. Thanks to @anaheimducks for the emergency repairs last night.

Rickard Rakell, Anaheim Ducks defenseman: When you see teeth laying on the ice, it's pretty gross. It happened just a couple games ago, for us, when we were playing Edmonton. Drake Caggiula had six teeth knocked out of his mouth. They were just laying there, in full sight. All the teeth and then some blood.

Matthew Tkachuk, Flames winger: When I was younger, I was probably 10 or 11, I played with a kid who got a skate to the neck. He was bleeding, it nicked his jugular. He went to the hospital -- and ended up being fine -- but it was really scary. There was a lot of blood.

Cam Fowler, Ducks defenseman: I saw Jason Blake got his arm cut one time by a skate. It was pretty gnarly. You could tell he was kind of in shock. His face went pretty white.

Josh Bailey, Islanders winger: As players we see a lot. You see guys get pucks to the face, stuff like that. You see their jaws maybe out of place. I wouldn't say you get the sick feeling, but you feel pretty bad for them. I guess we're just used to it as hockey players.

Michael Stone, Flames defenseman: I saw a teammate get his wrist broken, and the bone went through the skin. I was in minors, and it was at practice. We thought he just got cut by a skate. That image definitely stuck with me.