The NHL Weekly Reader publishes every Friday. Seen something worth highlighting here? Hit me at greg.wyshynski@espn.com.

Every season, there are NHL players who level up. You know, like in a video game, where you go from terrible armor and primitive weapons to The Enchanted Golden Fleece Of Tck'Clu and The Sword That Binds The Darkness. (Sorry, doing reporting and writing this NHL esports story has turned my brain into a flashing pile of pixels.)

Take a guy like Rickard Rakell of the Anaheim Ducks, who went from 20 goals in 2015-16 to 33 goals last season -- and is poised to top that total in 2017-18. Or take a guy like Brent Burns of the San Jose Sharks, who already was considered among the NHL's elite defenseman and then all of a sudden found himself on an entirely different level: winning the Norris Trophy and finishing fourth for the Hart Trophy last season.

Here are 10 players who have leveled up impressively this season, from establishing themselves as impact players to finding a way to turn their star into a supernova.

Current level: Elite offensive player who rode a points streak of 26 consecutive games into the Hart Trophy conversation and, oh yeah, cracked 30 goals for the first time in his career. His average of 1.17 points per game, if he keeps it up, would be the highest in his career. Not the kind of player one acquires for a second-pairing defenseman whose greatest virtue is his handedness. But then, Hall never was.

Previous level: Young, talented goaltender whose first significant season of playing time inspired so much confidence that the Jets signed Steve Mason to a two-year contract as a safety net.

Current level: Vezina-caliber franchise goalie who has six shutouts to go along with a save percentage of .923. He's not only stopping the pucks that Ondrej Pavelec would wave to as they flew by him, but many more.

Current level: The leading scorer among defensemen in the NHL, who will now push back when pushed and whose play at even strength has blossomed, thanks to the magic defenseman pixie dust sprinkled on him by coaches Ken Hitchcock and Rick Wilson. (See also: Pietrangelo, Alex.)

Previous level: A naturally gifted goal scorer who, curiously, never scored that many goals -- and certainly wasn't the kind of leader the Avalanche needed.

Current level: MacKinnon is a legit Hart Trophy candidate, with 32 goals in 59 games, who is leading in the dressing room and by example. Who knew Matt Duchene was a giant anchor tied to his skates, keeping him from ascending to greatness?

Previous level: They got what now for Ryan O'Reilly?

Current level: Zadorov is one of the most improved players on the Avalanche roster, shooting the puck more often, playing with a nasty physical edge and being stout defensively. Two Avalanche players getting praised in this column space? Dogs and cats, living together. Mass hysteria ...

Previous level: "Reformed" pest who played above offensive expectations, Marchand had goal totals of 37 and 39 from 2015-17 to earn one of the loftiest titles in hockey: the guy who plays with Patrice Bergeron.

Current level: After a brief foray into "why Patrice Bergeron should totally win the Hart" territory, the Boston media has been singing the praises of Marchand as one of the league's elite scoring wingers (29 goals in 52 games) and Boston's unquestioned Hart candidate. He has notched more points (213) than Alex Ovechkin (212) in the past three seasons despite playing 19 fewer games. He doesn't play with Bergeron. Bergeron plays with him.

Current level: The Knights could have roughly 20 guys on this list who were supporting cast members (or outright buried) on other teams and then took off when they arrived in Sin City. But Karlsson is the best example of this, obviously, with an astounding 35 goals and an underrated two-way game. And he will be a restricted free agent too.

Previous level: A wonderful defensive player who probably was never getting invited to the NHL Awards as a Selke Finalist because, c'mon, what better measure of defensive prowess is there than one's own point totals?

Current level: Wait, 29 goals and 34 assists in 68 games? Please enjoy your trip to Las Vegas, and bring your tux.

Current level: Well, Saad does match him in one area: They're both in the top five among forwards in Corsi percentage at 5-on-5. But Paranin leads the Blue Jackets with 59 points in 68 games, while Saad ... does not for the Blackhawks (29 points in 68 games). Kane, meanwhile, is having his worst point-production season in six years.

Previous level: A smirking nuisance who would chip in occasionally on offense.

Current level: Basically a fantasy hockey player's dreamboat: 24 goals and 17 assists in 67 games, with 30 penalty minutes and 12 power-play points. Gallagher, 25, has played his way into untouchable status on a Canadiens team that should frankly be more touchable than an alpaca at a petting zoo.

Jersey Foul of the Week

This Philadelphia Flyers Foul is all kinds of troublesome. The first problem, of course, is that Peter Forsberg never wore this style of sweater during his playing days in Philly, but perhaps that is explained away by saying it's a 50th anniversary jersey. The second problem ... dude has No. 21 in the back and No. 12 on the sleeve, which simply can't be worth the "production error" discount we hope he received.

The problem with China

On Tuesday, the NHL released information about the 2018 Global Series, which ships off teams for regular-season games in Europe. That includes the Devils and Edmonton Oilers playing Sweden, and the Florida Panthers and Winnipeg Jets facing off in Finland.

But nothing in China, curiously.

Commissioner Gary Bettman said during the NHL All-Star Weekend that the league would return to China for preseason games this fall, but he offered few details about it. Then China was left out of this week's announcement.

Deputy commissioner Bill Daly told ESPN that the league is "still working on" finalizing these games. But the NHL and National Hockey League Players' Association, who partner on these initiatives, aren't seeing eye-to-eye on returning to China -- and that has everything to do with Olympic participation.

A source told ESPN the players "don't understand going to China if the league isn't going to Beijing, as Gary [Bettman] has stated." At the Sloan MIT Sports Analytics Conference last month, Bettman said: "I don't know that we want to go to China" for the 2022 Winter Olympics.

It is confusing. But know this: The NHL games in China are funded by metal can manufacturing company ORG Packaging, and the NHL and NHLPA made money off of last season's games there. The league signed a multiyear deal with ORG Packaging, and it will use some of that money to help refine Chinese hockey infrastructure while trying to increase exposure, sell jerseys and make an impact. The company has the encouragement of the Chinese government to grow hockey ahead of the Beijing Winter Games, and the NHL is happy to get paid for these "grass-roots" efforts, even if it doesn't send its players to the Olympics.

Still, it's very curious that the China games weren't done ahead of this Global Series announcement. Players still want to know the schedule, the days off that will come with this trip and, in the end, perhaps a little more about why it's worth the effort if they can't return there as Olympians in four years.

Earlier this week, on Calgary's Sportsnet 960, she called out CWHL commissioner Brenda Andress and NWHL commissioner Dani Rylan for failing to find common ground and merge their leagues at a time when women's hockey is climbing in popularity, especially in the U.S after the American team's gold medal win.

"We have two leagues standing in the way. You have the power to do this for women's hockey. Why are you standing in the way?" she said. "There's been lots of meetings between the two leagues. Many meetings that I've attended. To me, it's a no-brainer. Both commissioners know what needs to happen. The fact that it's been three or four years now since the initial conversations started, and nothing's happened; you have to point the finger at both commissioners. Enough is enough. Let's take women's hockey to the next level."

Campbell-Pascall noted that a number of prominent American-born players have opted to sign with the CWHL, including superstar Hilary Knight, who signed with Montreal this week.

"If people who follow women's hockey don't see this as a red flag, I don't know if we'll ever see it," Campbell-Pascall said.

But rather than favoring one league over the other, Campbell-Pascall indicated that the blame should be shared between two executives who have always struggled to work together, dating all the way back to the women's outdoor game at the 2016 NHL Winter Classic in Foxborough, Massachusetts.

"For them not to be a room every single day trying to make this happen ... I don't get it. To me, they're not doing their jobs," she said.

Of course, merging the leagues is easier said than done, as this Pension Plan Puppets piece pointed out last year. But in the grand scheme ... look, this is basically Sirius and XM. Stronger together, and more apt to survive, rather than apart.

I suppose we should discuss this:

Hey Amanda Kessel, how do you ruin a hockey fan's day in 18 seconds? pic.twitter.com/RpOfMTumhq 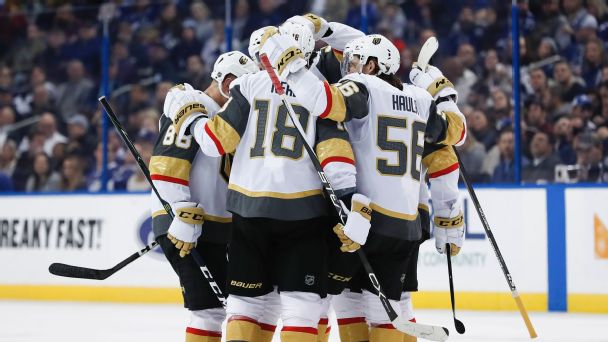 As you know, we have a segment on ESPN On Ice each week called "Phil Kessel Loves Hot Dogs," in which we discuss the worst hockey media takes. It's named after the legendary thud of a column by Steve Simmons that claimed Kessel ate hot dogs every day while playing for the Toronto Maple Leafs, which was later debunked.

Well, here's Amanda Kessel taking it one step further and claiming that Phil doesn't even love hot dogs. This doesn't affect our segment, although it hurts our hearts.

On that "hockey smell." [WCCO]

While other, more sensational coverage has gotten more attention, here's a solid look at the corruption that's ruining the KHL. [Raw Charge]

James Mirtle looks at 10 general managers on the hot seat. On Ken Holland: "He could also be bumped up to the president's role in Detroit with someone like Kris Draper becoming GM. Or they could opt for the status quo, yet again. But the fan base is getting restless. And fixing this roster won't be easy." [The Athletic]

As Tom Dundon made the media rounds after "firing" Ron Francis, his chat with Elliotte Friedman was probably most enlightening: "Green and red you can prove; yellow is the things that are debatable. I have no interest in yellow. We have to create the structure so that we know the difference. ... I want to make as few decisions as possible, because we've created a structure that is clearer for everyone." [Sportsnet]

A cool look at club hockey at Nebraska. [Daily Nebraskan]

Straight fire from Henrik Zetterberg, after the Detroit Red Wings' loss to the Vegas Golden Knights. "There's too much poke-and-hope on a lot of players," he said. "If you want to be a solid good player in this league, and if you want to win something, you have to learn to play the right way. Poke-and-hope might get you 25 to 30 goals, but you will never win anything." [Detroit Free Press]

Girls star in the graphic novel "Kicking Ice" and show that they belong on co-ed hockey team. [ESPN]