He played in the NHL for 16 seasons and 907 games, winning a Stanley Cup with the Boston Bruins in 2011. But his impact was less defined by what he accomplished on the ice than what the game allowed him to accomplish away from it: At a time when hockey players shunned activism and accepted an uncomplicated "shut up and skate" attitude, Ference was the antithesis.

His peers used to goof on him for his environmental stances -- he heard "tree-hugger" and "hippie" with frequency -- like driving an electric car when he wasn't riding a bike, and being a dedicated composter. But Ference helped the NHL Players' Association create the Carbon Neutral Challenge, a program that sought to offset the carbon footprint of players traveling to games. He worked for years on the NHL Green initiative that spearheaded a dozen environmentally friendly projects adopted by teams.

He also has been a public face for LGBTQ equality in hockey, including an endorsement of Pride Tape, whose profits support youth outreach initiatives. He marched in Edmonton's Pride Parade in 2014, becoming the first pro athlete in the city to do so.

He believes in hockey, because he believes the sport can be used as he has used it: as a way to build communities and, via the NHL, as a platform to effect change.

"From the NHL's point of view, in the last year we put out our declaration of principles that spells out what we know hockey culture to be. It puts it on paper that we are welcoming of all forms of the game, and everybody who loves the game. No matter where you come from, no matter what your sexual orientation is," Ference said. "It's great, but those are words. It's up to us to turn that into action."

So he has taken action: Ference, who last played in 2015 for the Edmonton Oilers, has joined the NHL as its first director of social impact, growth and fan development. His focus will be on grass-roots growth, community efforts and better facilitating the relationship between players and the league.

"During his playing career, Andrew Ference demonstrated his commitment to excellence both on and off the ice serving as an innovative ambassador for the sport and the league in building vibrant communities through social impact," said Kim Davis, NHL executive vice president of social impact, growth initiatives and legislative affairs.

Ference believes in hockey, because he also believes he's not alone.

"There are a ton of guys that would love to be a little bit more open, be a little more P.K. [Subban], show the world the things you're into and not have to hide or go dark for five days because you had a losing streak," he said.

"We have to progress to that level."

So how do they get there?

Ference's environmentalism is, among NHL players, a populist initiative. Peers like Jonathan Toews of the Chicago Blackhawks have been vocal about climate change. Ference believes green initiatives resonate with NHL players because they understand them on a personal level.

"So much of it can be broken down to the local level. When you hear 'green initiatives,' you think globally. I think sometimes that's the hiccup: When you make it a global issue, which it is, but locally we can have such an impact," he said. "If I'm a player, and you start talking about the big issues about global warming, I might not be able to relate to that as much as I can relate to my local rink and some environmental designs for it, so it can stay open. Or that the waterway in our hometown isn't polluted."

But step away from an issue like "let's save local rinks" and you hear silence from NHL players who would rather tap dance on a landmine than wade into anything close to a political issue. We're not just talking about trips to the White House or the national anthem -- pick a divisive issue, and chances are there's a professional hockey player not talking about it.

Ference has a few theories on this.

"I was always understanding about why guys weren't more involved. There are two takes on it. The first is that the reason they get so good at what they do, not just hockey players but professional athletes, is that do one thing over and over again. They have OCD almost. They concentrate on one thing and get good at it. So when they have a more closed-off view of the world beyond what they're becoming an expert at? I have sympathy for that. Is that healthy? No. It's not good. But it's part of what makes you good at sports," he said.

"In saying that there are a ton of guys that are really smart. Interested in many other things. But there's a hesitation to put yourself out there in terms of perhaps getting jumped on by fans or your coach or your GM. If you're getting involved in other things outside of the game itself, you open yourself up to criticism, even if it had nothing to do with the game that you play."

As much as public backlash is a concern for players voicing their opinions on non-hockey matters, Ference believes internal pressures are just as muzzling.

"When I had a horrible game, it had nothing to do with the fact I work to improve the environment. Or support a cause. There's zero correlation. But there's a genuine hesitation amongst guys to get heavily involved in things outside the game because you open yourself up to criticism that you're not focused," he said.

"You have to get permission, from a coach or a GM, to say that they won't hold this over your head if we lose a game. That's what would take the handcuffs off of guys."

A big part of that equation, then, is trust between the players and their employers. Which, as we've seen between the NHL and the NHLPA, doesn't always exist.

Article 32.1 of the NHL collective bargaining agreement with the NHLPA references a "Joint Broadcasting/Marketing Committee" between the league and its players. It's supposed to explore sponsorships and licensing, media access and the relationship between players and their teams. It has been around for a while, and Ference and Brendan Shanahan both served as representatives on the committee. But it's not exactly a priority in 2018.

"Yeah, it's in there. And completely underutilized," Ference said, with a laugh.

The players and the league point fingers at each other when it comes to problems in marketing the game, and in their overall partnership. The NHL claims players won't participate in promotional initiatives that may take them out of their comfort zones; for example, the NHLPA shut down the All-Star Game fantasy draft. The players claim that the NHL doesn't have a partnership with them to grow the game; for example, the hypocrisy in not participating in the Winter Olympics while continuing to play NHL games internationally.

Part of Ference's new gig is better facilitating that partnership, and he believes the key is to have both sides dive into the pool at the same time.

"You have to bring people in early. If you do a big initiative in isolation -- you do the work, the planning, but it's all inside your own giant bubble -- there's a good chance that when you reveal that with your business partner, it won't go over so well," he said. "They need to cook up the ideas together. Get them involved at the start rather than finding out, after months of work, that there's a hiccup. Things that involve players require that."

Ference also believes this isn't a one-size-fits-all situation when it comes to partnering with the players. Things change with each new crop of players. Heck, when he started his career, players were on MySpace.

"I'm of one generation. We have an entirely different generation of players that need to be heard, and I have to understand my own limitations when it comes to connections to the locker room," he said.

In other words, the makeup of the NHL is changing. Ference believes it has to, in order to survive.

The NHL has been trying to use street hockey as a way to penetrate new markets and attract new fans for decades, especially in cities. But Ference mentioned several times that he believes its potential as an entry point to ice hockey has yet to be properly leveraged.

"It has huge potential. Its own culture, own style," he said. 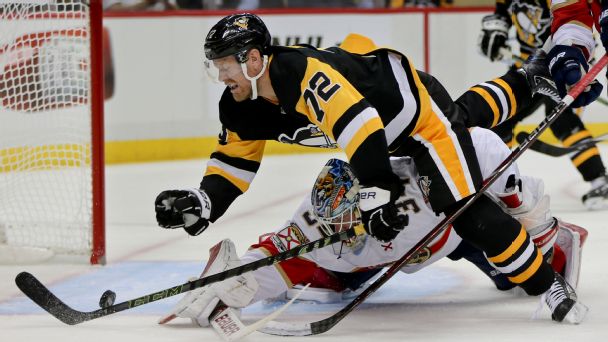 Before conversations with ESPN's John Buccigross and Wild LW Jason Zucker, Greg Wyshynski is joined by Emily Kaplan from the GM meetings in Boca Raton, Florida, to discuss the joys of goalie interference. Plus, some playoff race talk and the PWHA making their ballots public. Listen »

He feels the same way about women's hockey, which is something Ference has considered for years with two daughters and a friendship with Canadian legend Hayley Wickenheiser.

In both cases, the aim is to acknowledge the limitations of hockey's current demographic makeup -- on the ice and in the stands -- and that the demographics in North America as a whole are changing.

"You have to look beyond the way we've always been doing things. So you look at the women's game. You look at the immigrant population. You're looking at the influx of the Hispanic population in the U.S., in particular in the Sun Belt. Are we going to reach them through ice hockey? No. That's not the most accessible entry point into our game. That's when you start looking at street hockey, and looking at it as something that's more than just the thing that you play when you don't have enough money to play ice hockey," he said.

The problem is that when the NHL wants to be inclusive, many of the populations it chases see it as exclusive, thanks in part to incidents of racism and homophobia and misogyny. Look no further than what happened to Devante Smith-Pelly of the Washington Capitals. Smith-Pelly, who is black, was taunted by fans chanting "basketball" at him while he was in the penalty box last month at Chicago's United Center.

Ference noted that the Blackhawks quickly took action against the fans.

"You have to stand up to it. Immediately. I think we saw that recently. It's not a muted response to taunts like that. Because they have zero place in a hockey rink, or any part of our society. Across our society, people are feeling bolder about confronting these forms of racism. It's reprehensible behavior, right?" Ference said.

His new job in the league will afford him the chance to work on these issues -- conservation, inclusion and communication.

"We have to be more inclusive," he said. "There's no other option. When you look at the demographics of the United States, when you look at the influx of immigration that's going to happen in the U.S. and Canada for decades to come, you have no other choice than to reach beyond the traditional audience of middle-aged white dudes. You have to change if you want to stay relevant."