The NCAA Division I men's hockey Frozen Four begins on Thursday at 6 p.m. ET and concludes with the championship game at 7:30 p.m. ET on Saturday in St. Paul, Minnesota. (Check out the action on ESPN and ESPN2.)

In honor of that tournament, we have dedicated this week's power rankings to the #CawlidgeHawkey players who are now thriving on NHL teams.

Kyle Turris had 35 points in 36 games with Wisconsin back in 2007-08, where his roommate was Ryan McDonagh, who is now with the Tampa Bay Lightning.

Blake Wheeler was a star at Minnesota, scoring 96 points in 127 games, and he was named the MVP of the 2007 Western Collegiate Hockey Association Final Five championship.

Reilly Smith played three seasons at Miami (Ohio) and scored 122 points in 121 games. He was a plus-63 for this career.

Alex Killorn chose Harvard over Boston College, Boston University and Yale. He played four seasons for the Crimson and was a 2011-12 nominee for the Hobey Baker Award.

T.J. Oshie spent three seasons with the University of North Dakota and was a Hobey Baker Award finalist in 2007-08.

James van Riemsdyk scored 74 points in 67 games for the University of New Hampshire before moving on to the Philadelphia Flyers organization.

Shayne Gostisbehere was the NCAA men's hockey tournament MVP in 2013-14 for champion Union, and had 82 points in 119 NCAA games.

Joe Pavelski won an NCAA title with Wisconsin in 2006, when he had 53 points in 41 games for the Badgers.

Zach Werenski was named the Big Ten defensive player of the year in 2016 for Michigan. He had 61 points in 71 career NCAA games.

Ben Lovejoy played one year for Boston College and three years for Dartmouth College. He also played lacrosse at Dartmouth, where he was named to the All-Ivy League team.

Zach Parise played two years at North Dakota, scoring 49 goals and finishing as a finalist for the Hobey Baker twice.

Ryan Kesler played one season with The Ohio State University, after choosing the Buckeyes over Wisconsin.

Erik Johnson played one year with Minnesota after being drafted first overall in 2006 by the St. Louis Blues. He was the Golden Gophers' first No. 1 overall pick.

After winning "Mr. Hockey" in Minnesota as a high school player, Nick Bjugstad scored 98 points in 109 games over three seasons for the University of Minnesota.

Ben Bishop led the Maine Black Bears to the 2006 and 2007 Frozen Four, losing in the semifinals both times. 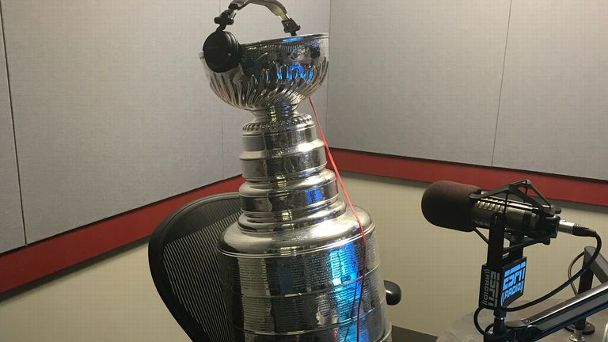 Highlighted by conversations with TSN's Jason Brough and "The Keeper of the Cup" Howie Borrow, Greg Wyshynski and Emily Kaplan debate the draft lottery situation as well as barrel down the last days of the playoff race, including injuries of note and more. Listen »

Jaccob Slavin was named the National Collegiate Hockey Conference rookie of the year while playing for the Colorado College Tigers.

Johnny Gaudreau played three seasons for Boston College, winning the Hobey Baker in 2014 after leading the NCAA in goals, assists and points.

Cam Talbot is a product of the University of Alabama-Huntsville, and is one of only two players to reach the NHL from that program. (The other is former Flyers forward Jared Ross.)

Clayton Keller played one season with Boston University, scoring 21 goals in 31 games, and that was good enough to earn Hockey East rookie of the year honors in 2017.

Max Pacioretty scored 15 goals in 37 games during his only season with Michigan in 2007-08, winning conference rookie of the year.

Ryan Dzingel played three years for Ohio State, scoring 108 points in 110 games and leading the Big Ten in scoring in 2014.

Jack Eichel played one season with Boston University. He scored 71 points in 40 games and skated away with the Hobey Baker and the Rookie of the Year award after leading the NCAA in points.