At this point, the Washington Capitals must view the Pittsburgh Penguins like Charlie Brown does a football, Wile E. Coyote does the Road Runner or the New York Jets do Bill Belichick. They are an insurmountable obstacle, a constant and unavoidable hindrance. The twee definition of insanity has long been "doing the same thing over and over again, and expecting different results." But can one really be insane if he is at the mercy of a playoff bracket and his rival's stubborn refusal to check out in the first round? Or does that still fall under the diagnosis?

Once again, the road wasn't cleared for the Capitals during the Alex Ovechkin Era. For the fourth time, and the third consecutive year, Washington will face the Penguins in the Eastern Conference semifinals. The hockey world echoed the sentiment of Capitals center Nicklas Backstrom after his team advanced past the Columbus Blue Jackets. "Here we go," he said, "they won the Stanley Cup two years in a row. Good for them. We're going to play in the second round against them. It'll be fun."

The Penguins are 9-1 against the Capitals in their 10 postseason meetings. Ending Washington's season has become just another rung on the championship ladder: Every time Pittsburgh has won the Stanley Cup, it has beaten the Capitals along the way.

There have been many, many lowlights for Washington. Here are the 10 lowest in their postseason battles with Pittsburgh:

Disappointment stings much more when it's preceded by a dollop of hope. The Capitals are 8-2 in the first game of their 10 playoff series against the Penguins, and yet are 1-9 in those series. Pittsburgh won Game 1 last season and in the quarterfinals in 2000, when the Penguins finished 14 points behind the Capitals in the standings but made a declarative statement in their 7-0 Game 1 win, thanks to four points from future Capitals star Jaromir Jagr.

This was memorable for the inevitability of it all. The Capitals entered the game 4-10 in in franchise history in Game 7s, and the Penguins made it 4-11 with a 2-0 shutout by Marc-Andre Fleury in Washington. It didn't matter that the Capitals had rallied from a 3-1 series hole. Once it reached Game 7, it was just a matter of how it was going to go down this time, considering that Washington had also never defeated Pittsburgh in a Game 7. As Capitals GM Brian MacLellan said after the game, you could just feel the tension and sense of doom in the arena.

There was perhaps no greater example of the Penguins occupying the Capitals' headspace than when owner Ted Leonsis commissioned a computer program for the 2009 semifinals that prevented fans from Penguins-centric area codes to purchase tickets online. (Pittsburgh fans who lived in the D.C. area, of course, could still break through this firewall.) "I got a lot of emails from Pittsburgh saying I was mean-spirited and unfair. I don't care. I'm going to keep doing it," Leonsis told the Washington Post. While the practice of teams protecting home ice is more commonplace today, it was seen as a petty reaction to the Penguins' popularity at the time.

The Penguins won the Patrick Division during the regular season and finished seven points ahead of the Capitals. But Washington, as is tradition, took Game 1 of the series in Pittsburgh. In Game 2, the Capitals roared back from a 5-3 deficit after two periods with three goals in 8:09 in the third period for a stunning 6-5 lead. But they surrendered that lead on a goal from Randy Gilhen -- one of three playoff goals in his career! -- and lost 7-6 in overtime on a Kevin Stevens score. Pittsburgh would win three straight to capture the series. In their first playoff meeting ever, the Capitals had already established the "new and exciting ways to lose to the Penguins" tradition.

One way to avoid a Game 7 collapse is to close out your foe before you get there, which the Capitals had a chance to do in the 1995 Eastern Conference quarterfinals. They lost in overtime in Game 5, despite holding a 3-1 series lead, but they had a chance to close out Pittsburgh in Game 6 at home. Instead, the Penguins got four-point games from Tomas Sandstrom and Luc Robitaille, who scored a goal 42 seconds into the game as part of a 4-0 first-period lead. The Capitals lost Game 6, 7-1, at home; their Game 7 loss in Pittsburgh was a mere formality. 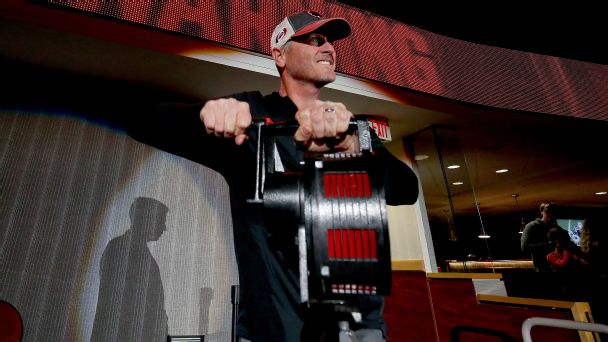 Greg Wyshynski and Emily Kaplan break down the second-round playoff matchups that have been set, and give their top candidates for the Conn Smythe. Plus, Hurricanes owner Tom Dundon and longtime Penguins beat writer Rob Rossi. Listen »

As we previously stated about hope preceding heartbreak, the Capitals tied Game 6 with 2:40 left to go at Mellon Arena on a Calle Johansson goal, seeking to push this back-and-forth affair into a Game 7. Instead, Martin Straka scored at 13:04 of overtime in soul-crushing fashion -- stealing the puck from Sergei Gonchar at the Capitals' blue line and beating Olaf Kolzig on a breakaway -- to give the Penguins the series. Gonchar, clearly a Manchurian Candidate-like sleeper agent for Pittsburgh, would win the Stanley Cup with the Penguins in 2009.

The 1991-92 Penguins were recently voted the second-best team in NHL history during the league's centennial celebration. Oh, how the narrative could have shifted if the Capitals had won their first-round series against that loaded team. Washington led 3-1 heading into Game 5, but the Penguins rallied with three wins, including this Game 7 victory on the Capitals' home ice. Washington routed Pittsburgh early in the series, so the Penguins shifted their philosophy to a passive trap and baffled the Caps. As the New York Times put it, Game 7 was "an excruciating finish to a series that bordered on the implausible." Sounds about right.

Washington was a Presidents' Trophy-winning, 120-point team that was gutted in the first four games of this series as the Penguins took a 3-1 lead. The Capitals pushed the series to Game 6 back in Pittsburgh, and suddenly it looked like the hockey gods were going to favor them: The Penguins blew a lead in the third period on three straight delay-of-game penalties, and the game went to overtime. Would it finally break in the Capitals' favor? Of course not. Bonino scored the series winner 6:32 into overtime to send Pittsburgh to the Eastern Conference Final. At least it helped give us the origins of the "Bonino, Bonino, Boninooooo!" call from Hockey Night Punjabi.

It's one of the greatest "what ifs" in Capitals history: What if Ovechkin had scored on that breakaway just three minutes into Game 7 on home ice, instead of Fleury snagging it with his mitt? Instead, it was Crosby who opened the scoring less than four minutes later. Ovechkin would score in the second period ... after the Penguins had built a 5-0 lead, en route to their 6-2 Game 7 win.

A lot to choose from, but this is still my absolute favorite moment from Game 7 in 2009.

A loss so devastating it's remarkable that it didn't inspire Capitals fans to take up another hobby, en masse. It was April 24, 1996, in Game 4 of the Eastern Conference quarterfinals. The Capitals had a 2-1 series lead, and oh did things look good in Landover, Maryland. Washington took a 2-0 lead in the game. Mario Lemieux was ejected at the end of the second period for instigating a fight, with the Caps up 2-1. Nedved tied it in the third period. He would end it hours later at 2:22 a.m., in the fourth overtime, after 79 minutes and 16 seconds of extra hockey, in the longest game in the NHL since 1936.

The Penguins would win the next two games and take the series. "The Capitals always seem to suffer the improbable, the preposterous in the playoffs," wrote William Gildea in the Washington Post, in what must have felt like a lament 22 years ago rather than a prophecy.