LAS VEGAS -- When Brad McCrimmon was a kid, growing up on his family's farm in Plenty, Saskatchewan, he would tell his father, Byron, and grandfather Angus that he would one day play in the NHL, win the Stanley Cup and bring it back to the farm so everyone could see it.

It was a dream Angus James McCrimmon was familiar with because Byron, a longtime senior player and coach for the Rosetown Red Wings in Saskatchewan, fantasized about doing the same as a child but never got to play or coach in the NHL.

Vegas Golden Knights assistant general manager Kelly McCrimmon, one year younger than Brad, played junior hockey with his brother but was seemingly more realistic when it came to his aspirations.

"I never even allowed myself to dream of something like that," McCrimmon said of winning the Stanley Cup. "We lived on a family farm in Saskatchewan and the two things that were the most dear to me was farming and hockey. I wasn't an NHL player. My dream was for Brad to win it."

Brad McCrimmon's dream came true in 1989, when he helped the Calgary Flames win the franchise's only Stanley Cup. That summer, he made good on his promise and brought the Cup home to Plenty, which has a current population of 164 people.

"The anniversary of their Cup win was on Friday [May 25]," Kelly McCrimmon said. "I was in Brandon coaching the Wheat Kings when Brad brought the Cup to the farm, and wasn't able to get home that day. But I know how special that was for Brad and for our family to bring the Stanley Cup to Plenty, Saskatchewan, which is a small town. It was pretty special for everyone there to get to see someone that they knew, that had played minor hockey there, have a chance to bring the Stanley Cup back to our hometown."

McCrimmon is now on the cusp of etching his name onto the Cup 29 years after his brother did and bringing it back to Plenty. Vegas defeated the Washington Capitals in Game 1 of the Stanley Cup Final; Game 2 is set for Wednesday night.

"I haven't even thought what that would be like," McCrimmon said. "I was extremely proud when Brad won the Cup in Calgary. That was his dream. That was a big moment for our family and parents for us to follow him through that experience when he was a prominent player on a Stanley Cup champion team. It was gratifying for all of us. We were so proud that he had the opportunity to get his name on the Stanley Cup and be a member of a championship team. I know he'd be proud of me too."

After an 18-year career in the NHL during which he earned the nickname "Beast" as one of the league's toughest defensemen, Brad McCrimmon transitioned to coaching as an assistant with the New York Islanders, Flames, Atlanta Thrashers and Detroit Red Wings. He left Detroit for Russia to become the head coach of Lokomotiv Yaroslavl of the Kontinental Hockey League in 2011.

It was a chance to prove himself and potentially become a head coach in the NHL one day, but he would never coach a game for Lokomotiv. On Sept. 7, 2011, Brad and his team were killed in a plane crash on the way to their first game of the season.

When Kelly McCrimmon found out he had lost his brother, he was numb. It didn't seem real. He had just talked to him about their respective seasons; Kelly was the owner, general manager and coach of the Brandon Wheat Kings of the Western Hockey League. 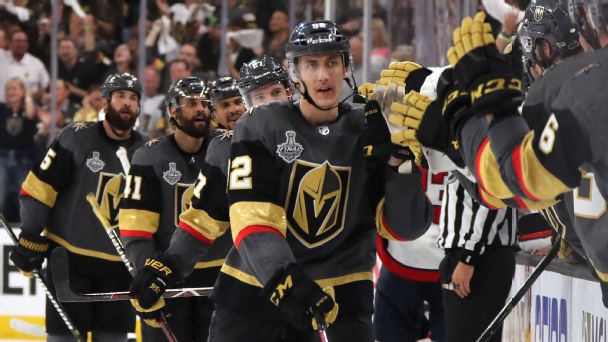 Did you miss Game 1 of Capitals-Golden Knights? Just want to re-watch all or part of it? Watch here now »

"It was devastating," McCrimmon said. "You find a way to keep functioning somehow. That's true for his family, my parents, myself. ... It's devastating when tragedy strikes like that. It's similar to what happened to the junior hockey team in Humboldt recently with the tragic loss of life when you least expect that type of thing to happen, and that's what happened with Brad's team in Yaroslavl.

"The entire team perished. I don't think you ever completely get over that. You try your best to keep yourself functioning day to day and get to a point where you think so much about all the good times and the good things about Brad's life that it helps ease the pain. But there are still those moments where you really miss that person, right? Whether that's a birthday or a holiday or something that happened in your life where he would have been your first phone call to talk about what happened. Those are the times I really, really miss having Brad around."

There have been several times during Vegas' magical inaugural season when McCrimmon wished he could pick up the phone and talk to his brother. It would have been his first call after Vegas won the Western Conference finals in Winnipeg, a 2½-hour drive east of Brandon.

"You just try to keep pushing your way through after it happens," McCrimmon said of his brother's death. "I was out of circulation for a while. I went with Brad's wife, Maureen, to Russia and we had a service over there. Then we had a service in Detroit, and then we had a service in Saskatoon, which is by where we grew up, and that took a period of time where I was only doing that. After the third service, it was back to Brandon and running the Wheat Kings."

McCrimmon left the Wheat Kings after 28 years when Vegas general manager George McPhee called him two years ago and asked whether he would be interested in being the assistant general manager of the NHL's newest expansion team -- which didn't even have a name at that point.

"I really didn't know George prior to coming to work here," McCrimmon said. "But I knew of George, and had a lot of respect for the work that he's done as a general manager and the great teams he built in Washington, which ironically we're facing now. We really got along well personally and professionally. We see things very similar. Our approach to everything that we've done here has been a joint effort."

The job McPhee and McCrimmon did in assembling the Vegas roster through the expansion draft is one reason why McCrimmon will likely be among the favorites to become general manager of Seattle's expansion franchise. For now, however, McCrimmon is focused on Vegas winning three more games and completing one of the greatest stories in sports history. It's a story and a team McCrimmon knows his brother would have enjoyed.

"Brad would be really proud of the opportunity that I've had here and really happy to see us enjoy success," McCrimmon said. "I think he would have had a high level of admiration for the way we play and how our coaches coach. Brad would really appreciate this team."