LAS VEGAS -- At Stanley Cup Final media day, Washington Capitals center Evgeny Kuznetsov was asked a seemingly simple question: "What is it about the playoffs that brings out the best in you?" After all, the 26-year-old blazed through the first three rounds with a league-high 24 points. His 11 goals were just one shy of that of superstar teammate Alex Ovechkin.

Kuznetsov looked at the reporter, raised an eyebrow and laughed. "Must be a rookie," he quipped. After a pause, Kuznetsov explained: "I don't like to talk about my personal game."

The reporter was, in fact, an industry veteran. The lesson is one that he -- and anyone who follows the NHL closely -- is keenly aware of: hockey players hate talking about themselves. They abhor it so much that a common tic is replacing the pronoun "I" with "we" or "you." (Example: When Winnipeg Jets center Mark Scheifele was asked during the Western Conference finals for the secret to his scoring surge, he responded: "You don't really know if there's anything specific. You just want to play your game and help the team.")

As New York Islanders forward Anders Lee told me earlier in the season: "If anything, you hear the pronoun 'I' when mistakes start to happen."

In some cases, players see a trap with using the "I" pronoun and swiftly circumvent it like they're swerving a Ferrari around a pothole. Washington's John Carlson was reminded this week that he led all defensemen in points in both the regular season and the postseason. Then he was asked what the individual accomplishment meant to him. The nine-year veteran barely hesitated: "It's just a function of teammates around me and just fitting into our team and the way we like to play." Next question.

"It's a team sport. How can you just talk about yourself if the game is won and you scored three goals? Somebody had to pass you the puck at some point," Vegas Golden Knights alternate captain Pierre-Edouard Bellemare said. "It's the way we are taught from the start. I've played in different leagues [professionally in France and Sweden, and now the U.S.], and it's the same everywhere. For hockey players, talking about yourself feels wrong."

The paradox encompasses the NHL's core issue with identity. Fans who love the sport appreciate players' selflessness and unwavering commitment to the grind. After all, a star forward skates for only roughly one-third of a game. Stanley Cup folklore is dotted with once-anonymous heroes.

But the sport's popularity can feel limited by its lack of star power. For the second consecutive year, hockey players were frozen out of ESPN's World Fame 100 list. Name a television commercial you've seen recently that a) involves a current NHL star b) runs in the U.S. and c) doesn't include Patrick Kane or Duncan Keith cooing about "real smooth" Gatorade or Braden Holtby making saves for Geico (both companies are, not coincidentally, core league sponsors).

Says one high-profile NHL agent: "If I go to one of my guys and present them with a sponsorship opportunity -- not for an equipment manufacturer -- before they ask me 'How much?' they'll say, 'Do you think it's OK for the team?' And that's just the guys that would consider it. Most would say no right away. Guys just don't want to do anything that calls attention to themselves outside their team."

All of this feels like a stark cultural contrast to NBA or NFL players.

"In basketball or football, a lot of those guys are branding themselves in different ways," Capitals winger Brett Connolly said. "A lot of the hockey guys just want to go about their business. We're not too flashy. Obviously, there are a few guys in the league who do do that, but they're the minority. You just go about your business and let your play do your talking. That's just the way guys are."

Colorado Avalanche star Nathan MacKinnon scored 39 goals and tallied 97 points this season. The MVP candidate is considered one of the main reasons the Avalanche made a 47-point improvement to make the playoffs. But he doesn't see it that way.

"In other sports, one or two really good players -- an all-star quarterback, LeBron -- can carry you to the finals," MacKinnon said in March. "In hockey, it's not like that at all." 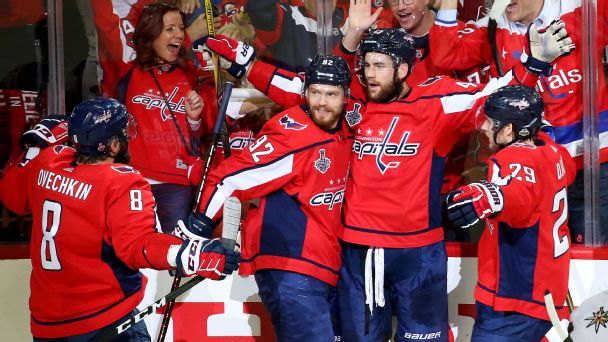 Greg Wyshynski and Emily Kaplan come to you from the cavernous bowels of the Capital One Center to recap Games 3 and 4 of the Stanley Cup Final, talk to Isabelle Khurshudyan of the Washington Post about the series and share other great stories from the Caps beat. Plus, Greg and Emily talk to NHL draft prospects Filip Zadina and Brady Tkachuk about their journeys and more. Also, the team gets into all of your favorite segments of the week! Listen »

To be fair, not everyone is OK with the status quo. At Stanley Cup Final media day, Capitals depth winger Devante Smith-Pelly made an astute observation: "You watch these events on TV, and it's always the same, and it's always cliché. I think if one day you come to one of these things and everyone talks about themselves, then the next year, everyone will talk about themselves."

When asked if he wished it were different, Smith-Pelly said: "I do, I really do. I joke with the guys that if I ever score a hat trick in the Stanley Cup Final, I'm talking about how good I was, and I'm not talking about any of you. We always joke around about stuff like that. I do wish that guys would -- I wish Ovi would say, 'I'm a sniper, I'm the best goal scorer in the league.' But that's not what hockey players do."

Bellemare considered what it would take for reform in hockey. "I think sometimes our interviews might be boring, for sure. Sometimes we hide our personalities, try not to make mistakes, because it's important for the sake of the franchise, for the sake of the entire town," he said. "At some point, maybe it would be good for guys to show personalities, show when they are pissed off, because people like to see the truth in every guy.

"But I'm not sure how it would change. And I'm not sure change is coming. Many players are just comfortable with it this way."