LAS VEGAS -- Barry Trotz could not have looked more relaxed during the Washington Capitals' postseason run. At the end of most news conferences, the Capitals coach grabbed a Gatorade or water bottle sitting on his podium. Before leaving the room, he blurted out: "Hydrate! Everyone hydrate!" which became somewhat of an inside joke with reporters.

Twice, Trotz -- donning a full red sweatsuit and baseball cap -- did the traditional pre-practice "hot lap," powering his way around the rink (riling up the players on his bench) and finishing by balancing, albeit a bit wobbly, on one knee in stride -- like his superstar captain, Alex Ovechkin.

After the Capitals wrapped up the Stanley Cup with a 4-3 win in Game 5 Thursday night, Trotz was spotted sharing a laugh with team staffers outside the tunnel. He was seen walking the few blocks from T-Mobile Arena to the team's hotel, opting for fresh desert air over a ride on the team bus. "He seems positive," noted veteran defenseman Matt Niskanen. "And loose."

"He's buzzing for sure," center Evgeny Kuznetsov said. "That's good, when you're a coach, to stay positive. He's so emotional. At the same time, we understand it's big for him, too. A big moment." Indeed, after 19 years in the league -- including his first 15 seasons in Nashville -- Trotz had finally won his first Stanley Cup.

The Capitals are Stanley Cup champions 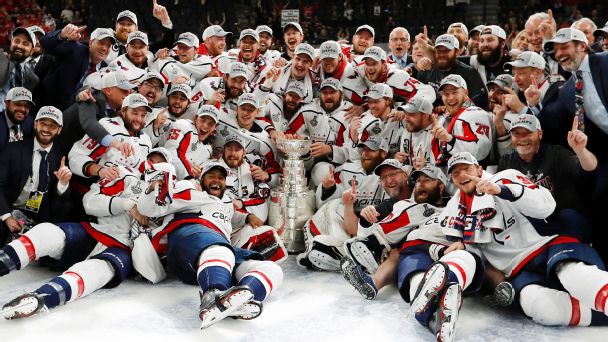 But bubbling under the surface all season was a dueling narrative of an uncertain future. Trotz's contract expires at the end of the season, and in a year where the Capitals were expected to regress -- after back-to-back President's Trophy seasons, 2017-18 was not the season they were supposed to finally get over the playoff hump -- management was not ready to commit to Trotz.

He never received an extension during the season. And even as the playoffs began, GM Brian MacLellan did not publicly offer support. At the end of Washington's first-round series win, cameras spotted Trotz shaking hands with Columbus Blue Jackets coach John Tortorella. Amateur lip readers immediately jumped when Trotz appeared to tell his peer: "I'm gone. I'm gone. I'm not coming back. I'm gone." (Trotz has denied the nature of the conversation.)

What's more, Washington has a natural succession path for a post-Trotz era. Todd Reirden, 46, was voted second in an NHLPA player poll asking what assistant is most ready to become an NHL head coach. The Capitals have been territorial over Reirden, promoting him to associate head coach in 2016 and blocking him from interviewing for head-coaching vacancies last offseason.

Everything seemed in place should the Capitals suffer another early playoff exit, as was expected. So ... now what happens?

"I know, talking to [Trotz], at different points in the season, he's not worried about it," veteran defenseman Brooks Orpik said. "He knows, as experienced as he is, and as long as he's been around the game, I think he knows that it will all take care of itself at some point, and that's probably allowed him to enjoy it a lot more."

Niskanen said while the entire team knows what's looming, Trotz's future remained a taboo subject -- especially in these playoffs. "Do we talk about it? Not one bit. I can't think of an instance where anyone has even talked about it," the defenseman said. "I don't think anything is worried about it. I'm not sure he's worrying about it. It's just the way it is, in most jobs, I mean I call it a job. It's the same thing with John Carlson, who knows what's going to happen there? We're focused on this right now. If it's the regular season, potentially there could be some issues there. Things come up when things aren't going well, those kind of questions are asked. But right now we are having fun and focused on this series right now."

Trotz, to his credit, has played it cool. In a news conference on the eve of Game 5, the coach cryptically explained why he has been able to project a zen attitude. "I've gone through a few things last summer that gave me some really good clarity on how I define myself or how I define people or whatever," Trotz said. "I think it's just given me real clarity."

On the ice while celebrating the Stanley Cup, Trotz offered this: "I'm not even going to go there. I said to [GM] Brian [MacLellan] there's no reason that I don't want to be there. No matter what happens, give me a couple of days to enjoy or not enjoy what happens. But ... these are my kids. This is a pretty special group. We'll talk. I'm not worried, one way or the other. I've been doing this for a long time. I don't lose any sleep over it."

So perhaps Trotz himself knows exactly what's next for him. Here is an examination of his options:

Return to the Capitals

It would seem foolish now if MacLellan didn't offer Trotz a contract extension. When asked if he thinks he has a future with the Capitals after Game 5, Trotz said: "Oh, absolutely."

Working in the coach's favor is how highly his players think of him. Ovechkin -- whose word carries much weight with owner Ted Leonsis -- has gone out of his way to compliment Trotz this postseason. Trotz has always had a reputation as a players' coach. "One of the things that separates him from many coaches I've had before -- not all of them -- is he takes the time to ask how your family is, or how guys' kids are doing," said Devante Smith-Pelly, who joined the Capitals this season. "He gives you an extra day or two off so you can be home with your family. That's something that I noticed right away. That's something that stood out. It's the communication part, the fact that he cares about us as a person, it makes us care about him as a person as well."

In the future world where Trotz stays, it feels natural that Reirden would pursue opportunities elsewhere. Not only might it be awkward to stay on staff, but the rising star might feel stunted by the current structure.

We're looking at one team in particular here, as in the only current vacancy in the league: the New York Islanders. Yes, a team in the same division as the Capitals.

According to a source familiar with the coaching market, several NHL teams with head-coaching vacancies this year considered Trotz as an option, but knew he would not be available until after the Capitals' run. Trotz could feel slighted by the Capitals' lack of faith earlier in this season and might want to move on. The Islanders are looking to reinvigorate with Lou Lamoriello now in control. Should the team retain John Tavares, they are a defenseman or two and a goalie away from becoming serious contenders.

In fact, one goalie who makes sense for the Islanders is pending restricted free agent Philipp Grubauer, who many in the league expect the Capitals to deal away this summer. However, it's unclear if Washington would want to do business with the Islanders -- especially if Trotz is on board. Should Trotz take another opportunity, Reirden is the natural next hire in Washington.

Take a year off

So you just won the Stanley Cup, what's next? Barry Trotz could go to Disney World ... then take a few vacations after that.

Consider Trotz's postgame comments: "I've done lots of good things in my life and I will continue to do that, and so I wasn't getting consumed with what was said or what my future holds or whatever. I'm in a pretty good spot."

It's possible he takes time off, but probably unlikely. In the past 40 years, only four Stanley Cup-winning coaches did not return to their team the next season. In 2002, Red Wings coach Scotty Bowman retired. Also after winning in 1979 with the Montreal Canadiens, Bowman left for a promotion -- to become Buffalo's GM. In 1991, Pittsburgh's Bob Johnson stepped away because of illness.

And then there's the outlier: Mike Keenan. Two weeks after winning the Cup with the Rangers in 1994, Keenan abruptly quit due to a dispute with management.

Would Trotz do something as rash as Keenan's move? There is a pride element, of walking away on one's own terms. But one NHL source, who knows Trotz well, said this: "Barry is a prideful guy, but coaching is his nature. I think it would be really hard for him not to coach next season. He has a lot left to give."