On trade deadline day during the 2017-18 season, St. Louis Blues general manager Doug Armstrong made the bold decision to trade center Paul Stastny to the Winnipeg Jets because, in his mind, the Blues weren't a true championship contender at that point.

So this summer, they got aggressive. On July 1, Armstrong and the Blues:

Some of the moves were criticized, while others were lauded. One thing fans could agree on: Armstrong and the Blues shot their shot this summer.

We discussed that with Armstrong last week, beginning with a chat about one of the free-agent targets who got away.

ESPN: Were you surprised the Blues weren't invited to the John Tavares party?

Armstrong: I wouldn't say surprised. We asked if we could be involved. He had obviously had a lot of time to figure out where he wanted to play, and he ended up being back at home. The other cities he talked to had great tax advantages. We wanted to talk to Ilya Kovalchuk too, and we couldn't get in front of him, either.

You just want to put your best foot forward. If they're interested in your franchise, great. If not, you move on to the next guy. You look at a guy like Perron: One player doesn't want to play here, another guy can't wait to get back here. This town might not be for everybody, but for the guys that come here, they love it.

ESPN: You're an Ontario boy. Did it shock you at all that the Maple Leafs finally got one of their homegrown stars to sign with Toronto?

Armstrong: Not really. The Toronto Maple Leafs are the Toronto Maple Leafs. They're the storied franchise. I read Bozak's Players' Tribune article, and it is what it is. [Tavares] understands what he's getting into. He's giving up his freedom and anonymity for seven years, but that's what him and his fiancée and his family want.

I don't say that in a negative way. It's a fabulous hockey town. I'm an Ontario boy. I grew up watching the Leafs. I understand what they mean to the city or the province or the country. I tip my hat to him. He wants to get in the ring. He's in the ring now. And I wish him nothing but the best. It's nice to see someone willing to throw the chum in the water and dive in and see if there are any sharks.

ESPN: Actually, he rejected the Sharks.

Armstrong: [Laughs] No pun intended there!

ESPN: The Central Division and the Western Conference seem like an ever escalating arms race. When you approached the summer, how much did that play into your plans?

Armstrong: We're trying to juggle two balls right now. We like our core players, who are either in the sweet spot of their career or entering it. But we also wanted to maintain as much of our future as possible. Free agency is usually the best way to do that, and we wanted to attack the market and talk to as many players as possible.

We were able to secure two producing players that can help that core group in Bozak and Perron. We had to give up a really top prospect in Tage Thompson and a future first-round pick, but since Ryan O'Reilly is 27 years old and entering that sweet spot of his career, we felt we were able to keep as many of our prospects as possible while still having a team that we hope can compete in the Central Division and the Western Conference.

ESPN: Tage aside, you didn't have to give up any of your blue-chip prospects for O'Reilly. 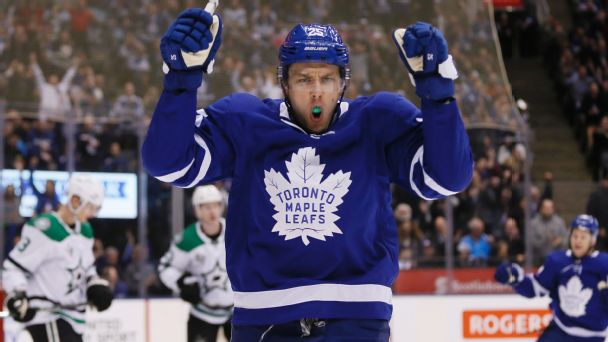 Greg Wyshynski and Emily Kaplan are live from Bristol to break down the biggest player movement from free agency thus far, including an in-depth look at John Tavares' switch to the Maple Leafs with Sportsnet's Chris Johnston. Plus, winners and losers, as well as the last rant line of the season from suffering Islanders fans. Listen »

Armstrong: That was very essential. There were a number of pieces that we had drafted that we weren't going to give up multiple pieces for any player. When we were able to take a name off that list and add a first-rounder, it became much more palatable for us. The deal reminded me a little bit of what you see in the NBA. I don't follow it that closely, but it looks like when trades are made, there's potential assets moved along and then you have to make the salary cap work. And that's how this deal came together.

ESPN: How much did the $7.5 million bonus payment play into this? It was a bit of a ticking clock for Jason Botterill and the Sabres.

Armstrong: I don't want to speak for Jason, but the compensation wasn't a concern of ours. Our ownership group was supportive of it. If you look at it ... if he's with you for the year, there's no real leverage. If you spent that money, you want to get something of service or something greater because you already paid that money.

For us, it's no big deal. We paid the money, but it's the cost of money over 12 months. For Jason, I would assume the [trade] price was going to be higher if he had paid that money, because it was paying him for that year of service in advance.

ESPN: A number of Sabres fans seemed happy to not have O'Reilly in the Buffalo room anymore. He's on his third team in the NHL. He had the whole Tim Horton's drive-thru incident. The catalyst for this trade was him telling the media he has basically lost his smile playing for Buffalo last season. How comfortable are you in adding Ryan O'Reilly to your room?

Armstrong: I'm very comfortable. I've had the opportunity to work with Ryan in international events, managing the World Cup team and being a part of that and seeing him interact with the coach at the world championships. His comments at the end of the year were raw emotion. I imagine you're taken just as much aback, but someone coming in and saying "we tried our hardest and maybe we'll get them next year" vs. someone who was so pained to make those comments. I took it as a frustrated player that understands the important of winning and let his guard down. It's like when someone says something after the game.

ESPN: When you lock up Bozak, is that a move made knowing that the O'Reilly deal was likely or was that independent?

Armstrong: It was independent. There are no guarantees in anything. You do what's in front of you, and then you regroup. We signed Bozak and Perron. We improved our team. Whether we got the O'Reilly thing or not, we were going to do that. And if the O'Reilly thing didn't work, we would have still had a first, a second, Tage Thompson and the other players. There's a bit of an illusion that everything needs to be done in 36 hours at the beginning of July. That it's going to be your team until the next year at that time. And that's not just reality.

ESPN: On Bozak, some people were taken aback by the money.

Armstrong: The money is what we used to work on the cap. Would every team like to have every player at 15 percent less? Sure. Would every player like to make 15 percent more? Sure. [Laughs] You're just trying to get everything to fit in the same pie pan. Everyone gets a slice.

ESPN: There were few things I was more fascinated by on July 1 than discovering that David Perron had only ever signed a contract with the Blues. He's played with other teams. But he's only signed deals with the Blues.

Armstrong: Yeah, it was interesting. It's nice to have him back. When we traded him [in 2013], we were a franchise finding our way. It's not like we were putting together seven or eight great years. Last time, we wanted to keep David but he was claimed in expansion. I looked at David coming back as someone we didn't want to lose a year ago, but we had to make some tough decisions. Vegas made an outstanding pick, and he had 66 points in 70 games. We're excited to have him back. And when you look at all the deals that went down, getting a guy back that was [around] a point-per-game for $4 million against the cap, that's a testament of David's desire to come back to St. Louis.

We were honest with him that we have a number of players coming up over the next few years. It had to fit for us. Again, you're getting a player that's going to play at 31, 32 and 33. I have confidence he can play at that level. He doesn't need to get back to 66 points. We expect him to get between 45 and 55 points. That's still a hell of a bargain in today's NHL.

ESPN: Chad Johnson is an interesting choice to replace Carter Hutton, who played long stretches for you when Jake Allen faltered. Is this move for a guy that could do that, or is this move one that tells Jake he's the guy and there's no "1-A" anymore?

Armstrong: We think [Johnson] can do that. If you go back to the 2016-17 season, he played in 36 games in Calgary. He played in 45 the year before that [with Buffalo]. He's been able to play a number of games. If necessary, if an injury happens to Jake, he can take the ball.

The season for [Allen] last year wasn't a good year for him. It wasn't a good year for that franchise as a whole. Last year, we were sixth best in goals against. I think we were near the bottom in shots against. If we play that well in front of him again, there's no reason he can't get to a .915 or .920 save percentage, which is what we need. When you look at what [Brian] Elliott and Hutton were able to do here, I think St. Louis is a good place to play if you're a goalie.

ESPN: Did you reach out to Paul Stastny at all?

Armstrong: Paul's another player that we talked to. I walked through the reasoning why we moved him along. Obviously, you look at making the playoffs as a steppingstone to winning a championship. I didn't believe where we were last year that we were a championship-caliber team at the trade deadline. We had players that we knew were tethered by a slight string on Jay Bouwmeester and Carl Gunnarsson. We knew their bodies weren't going to hold up through June.

We made a decision that it wasn't our year, so we'll get a ton of assets. Paul is a player who if he decided to come back, we could have worked a deal. There would have been no hard feelings from our side, or from his. I think this trade rejuvenated him. It gave him a positive way to end his year.