The Carolina Hurricanes have been a perennial preseason sleeper team, but after nine straight years of missing the playoffs, they want to be Cinderella at the end of the season -- and not have the clock strike midnight in early spring.

Enter new coach Rod Brind'Amour, the man tasked with bringing them there. Brind'Amour, 48, captained the Canes to their only Stanley Cup, in 2006. He played nearly 1,500 games before retiring in 2010, and has worked for the Hurricanes since 2011, most recently as an assistant coach.

In an interview for the season debut of the ESPN on Ice podcast, Brind'Amour talked about why the Canes never show videos that last longer than two minutes, why goaltending should improve this season, his thoughts on the Whalers throwback jerseys and how he still earns his nickname of Rod the Bod.

ESPN: I saw in training camp you had Team Grit and Team Grind. Were you responsible for those names?

Brind'Amour: Well, it wasn't much of an idea. We needed to come up with some names for groups. In the past, it's usually Group A or Group B, and it felt like we should be a little creative. I guess I can take credit for that.

ESPN: You're someone who didn't envision being a head coach in the NHL. What advantages do you think that might have?

Brind'Amour: Well, I guess it remains to be seen. But I think the advantage of just being a player, I think I'm pretty dialed into what the guys are thinking, having been there. There weren't too many situations in my playing days that I didn't come across. I was a first-line player, second-line, third-, fourth-line player. I kind of went through the whole thing. I think that gives me an advantage, at least early on, with relating to the players.

I think I also have an advantage because I know all of these guys because I've been in the organization for a long time. So I kind of know what we have. And they know me too.

ESPN: We hear so much about how different it is to reach millennials (and players born in Generation Z). In the past few years of coaching, what's something you've noticed and what techniques do you use to get through to them?

Brind'Amour: Well, it is a different time for sure, than certainly when I came into the league. I have three kids that are that age. We're a really young team, so I kind of feel like I'm talking to my kids sometimes. We have 18- and 19-year-olds playing on our team.

You have to get to know each person and each player individually and what makes them tick. It's not like the old days where you just kind of screamed at people and they did stuff. That doesn't work. So you just gotta spend time to get to know your players and treat them a little bit differently, but within the parameters of your team. Everyone's gotta follow the same standards that you set. It's a challenge but they're all good kids and that's the part I enjoy coaching.

ESPN: Is there anything you've tried, such as shorter meetings because of attention spans? I've heard some coaches say they feel they need to implant an idea so the player can feel like it was his idea and he can take ownership of it.

Brind'Amour: 100 percent, yeah. A lot of kids don't like to be told they're doing something wrong. You've got to show them. No. 1, you're right on short videos. We don't have any video meetings longer than two minutes as far as actual video time. Everything is just quick, to the point. And you're right, if you can make them think that it's their idea on something, it really does help.

At the end of the day, it's just us caring about these kids. If they feel like you've got their best interests, I think that's the way to go about it.

ESPN: Who were your biggest influences in terms of your coaching style?

Brind'Amour: I was fortunate to play a long time [20 NHL seasons], I think when I look back I had something like 17 different head coaches over my career on certain teams that I played with, then world championships, Olympics, all the things I was able to be fortunate enough to experience. You kind of use a little bit of everyone's stuff. At the end of the day, you got to be yourself, I know that.

I was fortunate to be with Peter Laviolette, he was my coach when we won the Cup. I really believed in the stuff he was doing and how he got us to be a team. So if it was one guy, I'd say he was the biggest influence. He's just a great coach.

ESPN: Goaltending has long been an Achilles' heel for this team. How will this year be different?

Brind'Amour: Good question. I think No. 1, we brought in another player, Petr Mrazek, who has been a starter before. I think he is looking to -- I don't want to say redeem himself -- he had a little bit of a rough year last year, so I like guys coming back trying to prove themselves.

And obviously Scott Darling is here, put a lot of work in this summer, to get his game and his whole mental approach to hockey and the commitment right up to where it needs to be. So I think we're in good shape. Obviously, it doesn't matter what team you talk about in the NHL, if their goaltending is below average, they're going to have a tough time.

ESPN: I saw Jaccob Slavin recently, he told me you are always in the gym and kind of crushing it. Can you walk me through your post-career gym routine?

Brind'Amour: Here's what I believe. And I'm old now [48], but I still can get after it a little bit. It certainly makes your message easier to lay out there if you can still walk the walk and not just talk the talk. Any of the preseason testing we do, I make sure I can get through it. If I can do it, certainly they can do it. I think it just carries a little more weight when you can do some of the stuff the players are expected to do -- they certainly don't have any excuses. 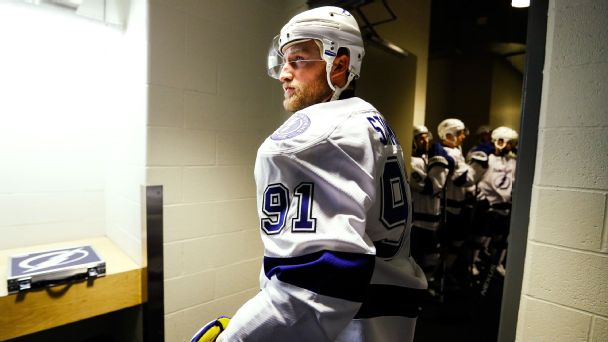 It's the season debut of the ESPN On Ice podcast, with Emily Kaplan and Greg Wyshynski! Before conversations with Rod Brind'Amour (30:16) and Isabelle Khurshudyan (1:02:08), Emily and Greg preview the Eastern (7:40) and Western (38:50) conferences. Plus, we address another dangerous Tom Wilson hit (1:13:53). Listen »

ESPN: You did all the preseason testing with the guys?

Brind'Amour: I didn't do it with them, I just did it beforehand in the beginning of the summer to make sure that the standards that we were wanting to uphold to were reachable and doable. I just felt like whatever I could manage to do would certainly be acceptable for the guys to do.

So I didn't want to do anything that didn't make sense, but I think we came to a pretty good solution on all that. The standard that we set here is high, but it's not unrealistic.

ESPN: Would your marks have been OK to make the Hurricanes' opening night roster?

Brind'Amour: Well my marks would have, but my play certainly wouldn't. There's a reason I'm doing this now. No, there's no mistake about that. The game has passed me a long time ago.

ESPN: What are your thoughts on the Hurricanes wearing the Whalers jerseys?

Brind'Amour: Yeah, it's going to be interesting. I didn't play for Hartford, I got down here when I played for the Hurricanes. I played against Hartford a lot. Unique color scheme. I think it's going to be neat; it's different, right? I think it's something different, create some buzz for our team anyway. I'm not sure if it's going to be something that's continued on or what, if this is a one-off, but I'm all for it. I mean, why not? It's part of the past of this organization and I think we're doing it a couple times, I'm not even sure, but it will be fun. Nice for all the fans.

ESPN: Make me look smart: Who is one guy I don't know but has really impressed you and will be a breakout player for the Canes this year?

Brind'Amour: I'd love to say 20 guys, because that would make my job a lot easier. Everyone knows Sebastian Aho, so I can't go with that one. I'm going to pick a young guy we kept on here that earned his spot in Warren Foegele. He came out of nowhere and earned his right to be on the team. He's here opening night. Keep your eye on him, and I think he'll surprise some people.