Many players have been pleasant surprises for their teams' fans this season. On the other hand, a number have been a drag. For this week's ESPN NHL Power Rankings -- voted on, as always, by ESPN's panel of experts -- we identify one player who must step up for all 31 teams.

Note: These rankings reflect which teams our voters think would win head-to-head matchups. Higher-ranked teams would be favored against lower-ranked teams.

Kevin Fiala. Hopefully, Tuesday night's game against the Knights is the spark Fiala needs, as the offensive spark-plug forward had two helpers vs. Vegas. His line with Nick Bonino and Ryan Hartman has struggled, as Fiala has one goal and four assists in 12 games after a 23-goal campaign last season.

Anton Stralman. It's odd to see one of the NHL's possession darlings at the bottom of the rankings in that category for the Lightning, but his minus-7.54 relative Corsi and minus-14 in shot attempt differential put him there. Hopefully, his partnership with Ryan McDonagh produces better results.

Tyson Jost. Last season, 14 of Jost's 22 points in 65 games were scored at even strength. Through 11 games this season, he doesn't have a point at 5-on-5. (He does have a goal and an assist on the power play.)

Jack Johnson. The defenseman, a divisively received signing in the summer, has one goal and one assist in 10 games while skating 19:25 per game. He has a minus-6.07 relative Corsi. There's always room for correction and adjustment, but this hasn't been the best start.

Nikita Zaitsev. With his two assists in 12 games, this is a reminder that the Leafs aren't paying Zaitsev through 2024 for his offense. They're paying him for his defense, which is why his minus-40 shot attempt differential -- worst on the Leafs, for a minus-7.75 relative Corsi percentage -- is concerning.

Erik Karlsson. It's 12 games, it's a new team, and it was a dramatic and stressful change in his life that happened just about two months ago. So we're willing to cut EK some slack here, after just three even-strength points (though he has four on the power play). He's still a possession monster, too. Can an above-average Karlsson be OK in lieu of the dominant one we've seen in past?

Tuukka Rask. The seemingly annual tradition of "Rask Panic" is in full effect, as the Bruins goalie has a .902 save percentage and a 3-3-0 record (vs. 4-0-2 for backup Jaroslav Halak). The silver lining is that he has a .917 even-strength save percentage.

Patrik Laine. Through 12 games, Laine has one even-strength point for the Jets. The good news is he's the kind of player who can pile them up when locked in. The bad news is he has been anything but locked in.

J.T Brown. The Wild are starting to turn the corner a bit, and hopefully Brown can latch on to that momentum because he has been awful. Brown has one assist in his first nine games and a minus-14.32 relative Corsi for percentage. He has been a healthy scratch recently.

Dmitry Orlov. A few Capitals are having Stanley Cup hangovers -- and seeing how they got after it this summer, who could blame them? -- but Orlov has one point in 10 games and is last in possession among Capitals defensemen, skating 21:59 per game.

Brandon Saad. Even with some recent signs of life, Saad has just two goals and three assists in 12 games. Those are a slight tick down from last season's dismal levels.

Pick Your Goaltender. Petr Mrazek (.887), Curtis McElhinney (.892) and Scott Darling (.903 in his first game back from injury) have produced an .884 team save percentage.

Pavel Zacha. Nine games for Zacha, no points for Zacha. The 21-year-old was drafted to be a top-six center for this team, and he has 19 even-strength points in his past 78 games.

Andrew Shaw. From being a healthy scratch to mustering a goal and an assist in seven appearances, with a minus-7.66 relative Corsi for percentage, it hasn't been a stellar start for the agitating forward.

James Neal. One of the most high-profile free-agent signings of the offseason, Neal has two goals and one assist in 13 games. This rough start can be attributed greatly to usage: Bill Peters has had him playing more with Derek Ryan and Mark Jankowski instead of Sean Monahan or Mikael Backlund. (He's also not getting enough offensive zone starts.)

Anthony Beauvillier. It has been a rough start for the promising young forward, who tallied 21 goals last season. He has one in 10 games, with no assists and a minus-6. Copious amounts of playing with Mathew Barzal would help.

Sergei Bobrovsky. If we told you there is a goalie who is 2-5-0, with an .882 save percentage and a 3.58 goals-against average, how many guesses would it take before you mentioned "Sergei Bobrovsky?" And yet, here we are.

Josh Manson. Manson had 37 points last season. He has a goal and two assists in 12 games thus far. Although the Ducks are a possession black hole, Manson is last on the team, with a minus-88 shot attempt differential at 5-on-5.

Marc Methot. A lower-body injury has limited him to eight games, but he's a minus-30 in shot attempt differential in those eight games. This might be who Methot is in 2018, but it's also not good.

Dylan Strome. The Dylan Strome Redemption Tour is a bus with a broken axel, stuck in the depot at this point. In 10 games, he has two goals and no assists, having been an early-season scratch. His underlying numbers are promising, but that just underscores the lack of production for the 2015 third overall pick. 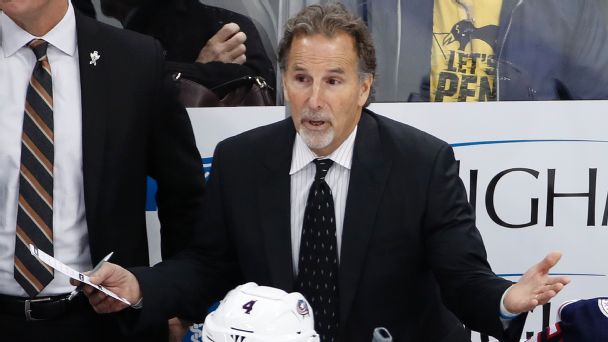 Greg Wyshynski and Emily Kaplan weigh in on John Tortorella's recent comments: Has the NHL become too soft (4:20)? ESPN business reporter Darren Rovell joins to talk about the NHL's partnership with MGM (14:20). We also look at early Hart Trophy candidates (29:25). Steve Whyno of the AP hops on to discuss all things NHL (37:22). Plus, the debut of a new trivia segment! Listen »

Tage Thompson. When the Ryan O'Reilly trade went down, the expectations were high that Thompson would be the breakout player for the Sabres, perhaps even as a top-line player. Instead, he has been limited to nine games, averaging 11:28 per game, and he has a 37.4 Corsi for percentage at 5-on-5. But he looked more effective after three straight scratches, earning his first point of the season with an assist vs. Columbus.

Max Pacioretty. He has dealt with an injury to himself and an injury that took away his center, Paul Stastny, after just three games together. But two goals for Pacioretty in 10 games with the Knights is the same start he had last season for Montreal, and last season was awful.

Chris Tanev. Tanev has had an injurious start to the season, playing 10 games and posting some startlingly bad metrics (minus-10.13 relative Corsi, for example). With Alex Edler out long-term, Tanev will try to turn things around with a new partner. Just like Will Smith in "Men In Black II." Hopefully this doesn't mean Ben Hutton gets neutralized when Edler comes back.

Brian Elliott. The goalie has a .911 save percentage at even strength, but he's at .889 overall with a 3-5-0 record, and the Flyers are last in the NHL in team save percentage.

Jake Allen. The Blues goalie has a horrid save percentage (.874 ) and a bloated goals-against average (3.99). The team in front of him isn't playing well, but he also isn't making the critical stops he needs to make. This has been a recording. Please press '1' to hear this recording again at the start of next season...

Tom Pyatt. Look, there isn't much one expects from Pyatt, with 13:55 in ice time per game and a career high of 23 points. But he has to be better than no points and a minus-4 in 11 games, with a league-worst minus-92 shot differential as a forward.

James Reimer. The Panthers' goalie was tasked with holding down the fort while Roberto Luongo healed, and he has responded with an .898 even-strength save percentage. The Panthers have the second-worst team save percentage in the NHL (.867) through nine games.

Ryan Spooner. The forward was solid after coming over from Boston last season. Then he signed a contract extension, but he has one goal and one assist in 11 games, sliding up and down the lineup. His shot attempt differential is minus-62 at 5-on-5.

Tanner Pearson. This almost feels like picking on Pearson because so many Kings players have been abjectly terrible this season. But one assist in 11 games is brutal for a guy who's usually good for at least 40 points. (Anze Kopitar would be the pick here, but he gets a pass for missing Dustin Brown in October.)

Justin Abdelkader. The 31-year-old forward has one goal and one assist in 12 games, but on the other hand, he's signed through 2023. Wait, maybe that's the same hand.