In some ways, the latest New York Rangers jersey fits their decades-old template. It's red, white and blue, with the team's diagonal lettering across the front. But that's where the similarities end and the reinvention begins, with the solid red area at the shoulder and the solid white area near the waist broken up by a slanted "NEW YORK" that resembles a pageant sash. Not to mention those pristine, white gloves.

The official Adidas-designed jersey is one of the most distinct Rangers sweaters in existence, though the context of that existence is debatable, when in fact it exists only in a video game.

In EA Sports' "NHL 19," the Original Six have gotten a radical makeover.

Say hello to the Digital Six, a first-of-its-kind collaboration among Adidas, EA Sports and the Original Six teams, who had a say in how these jerseys ended up looking in the game.

"We got together and started thinking about the opportunity to go beyond the guardrails of what exists in the real NHL and start exploring what we could create that doesn't exist in the real world," EA Sports' Evan Dexter, Sr. Global Campaign Lead for "NHL 19," told ESPN. "That was a super exciting thought, and by doing it in 'NHL 19' exclusively, it meant that we got to push the boundaries and try things that might be more bold than teams would be willing to try if it were a real-world, physical design. It was a chance to take six teams with a ton of heritage and tradition, which fans can, understandably, feel conservative around, and do something progressive and exciting with their brands."

The Digital Six jerseys will be first available in Hockey Ultimate Team mode on Nov. 5 and additional game modes on Nov. 19.

"These are the oldest, most storied franchises on earth, and they are based in the most hockey-crazed markets in the world. The crests and sweaters they wear on ice are sacred. They don't change them lightly," Merrill said. "But this was digital ice, so it was different. In the same way you can do dekes in 'chel' that you might never be skilled enough to do on real ice, we could do things with these digital jerseys that we would never consider for actual league play. Once those constraints were off, there were tons of ideas for all of the teams. We were able to create on a whole new level." 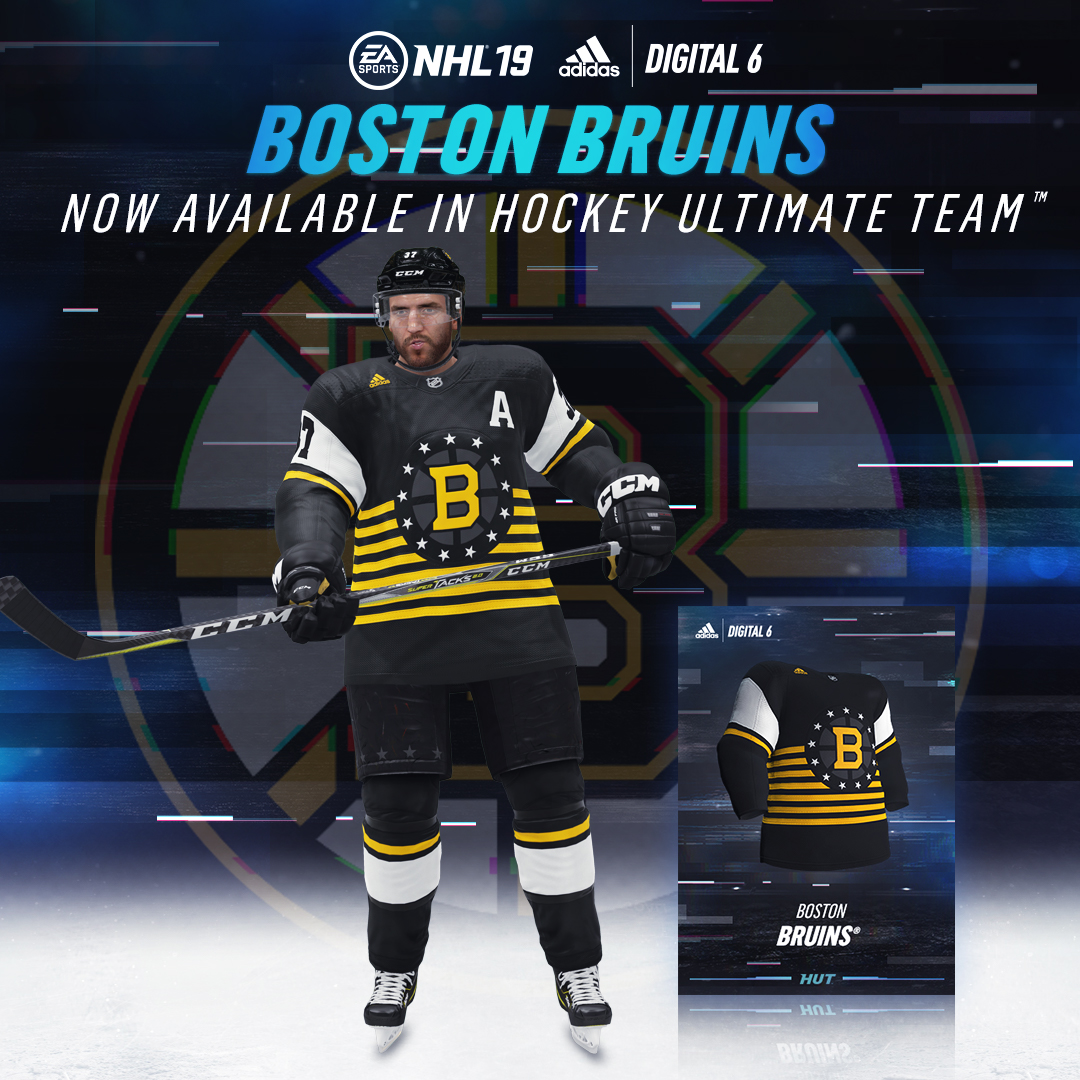 The unbalanced colors and the circle of stars around the B are like nothing the Bruins have ever worn. There are 13 stars, representing the 13 original colonies, as the Bruins were the NHL's first American franchise.

But there's something curious about the logo, as it seems to evoke another popular Boston sports entity: Barstool Sports. One assumes that there is significant crossover between the young, predominately male audiences for the game and the site. Was this intentional? Merrill says no.

"This is about Boston. Bostonians are so proud of their history as the front line of the American Revolution that they have their own special holiday called Patriots Day. The 13 stars and stripes represent the 13 colonies that declared independence against the British. This uniform is literally dipped in stars and stripes, so that Stoolies, and every other proud Bostonian, can play 'chel' in a jersey that celebrates the city and its history in the revolution," Merrill said. 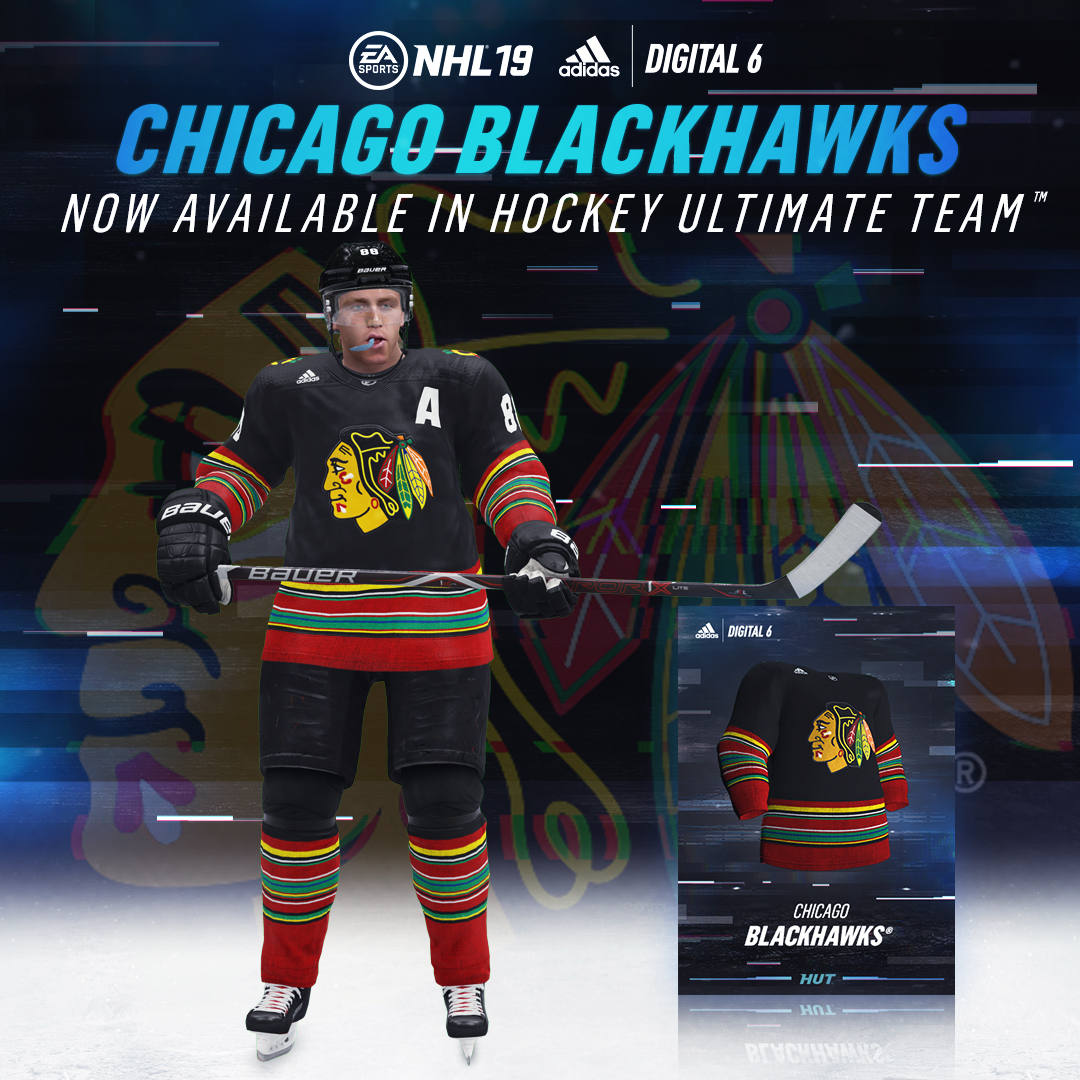 The Blackhawks' reinvention was one of the most distinct, as the seven colors of their logo were used in multiple stripes on the lower part of the jersey, the sleeves and the socks, giving the uniform almost a pan-African color scheme.

"That was one I've been wanting to do for a long time," Merrill said. "That Blackhawks logo is so unique. There are no other sport logos in the world that have seven colors. Creating a stripe that uses all the colors was an exciting challenge. We even tried to use them in a ratio similar to the crest. The result was surprisingly successful. It's a completely new-looking stripe that still feels very 'hockey' and captures the energy of the city of Chicago." 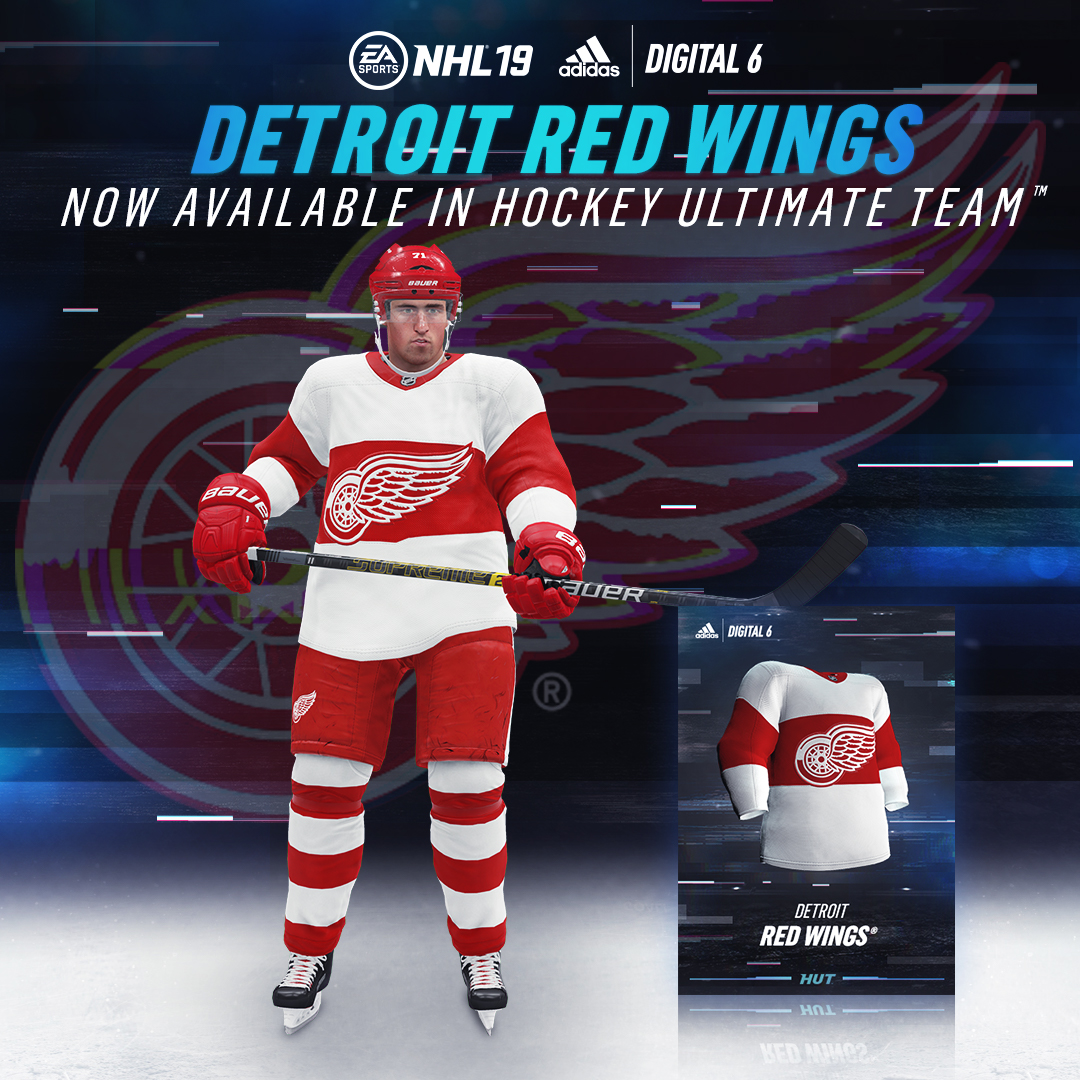 If there's one Digital Six jersey that feels like it was played fairly safe, it's the Red Wings'. Except for the candy cane socks, this jersey would have been at home in a Detroit outdoor game. In fact, it was inspired by a look the Red Wings had in 1926. According to Adidas, it was also inspired by "Detroit's automotive history, adorned with the kind of racing stripes that decorated many local muscle cars." 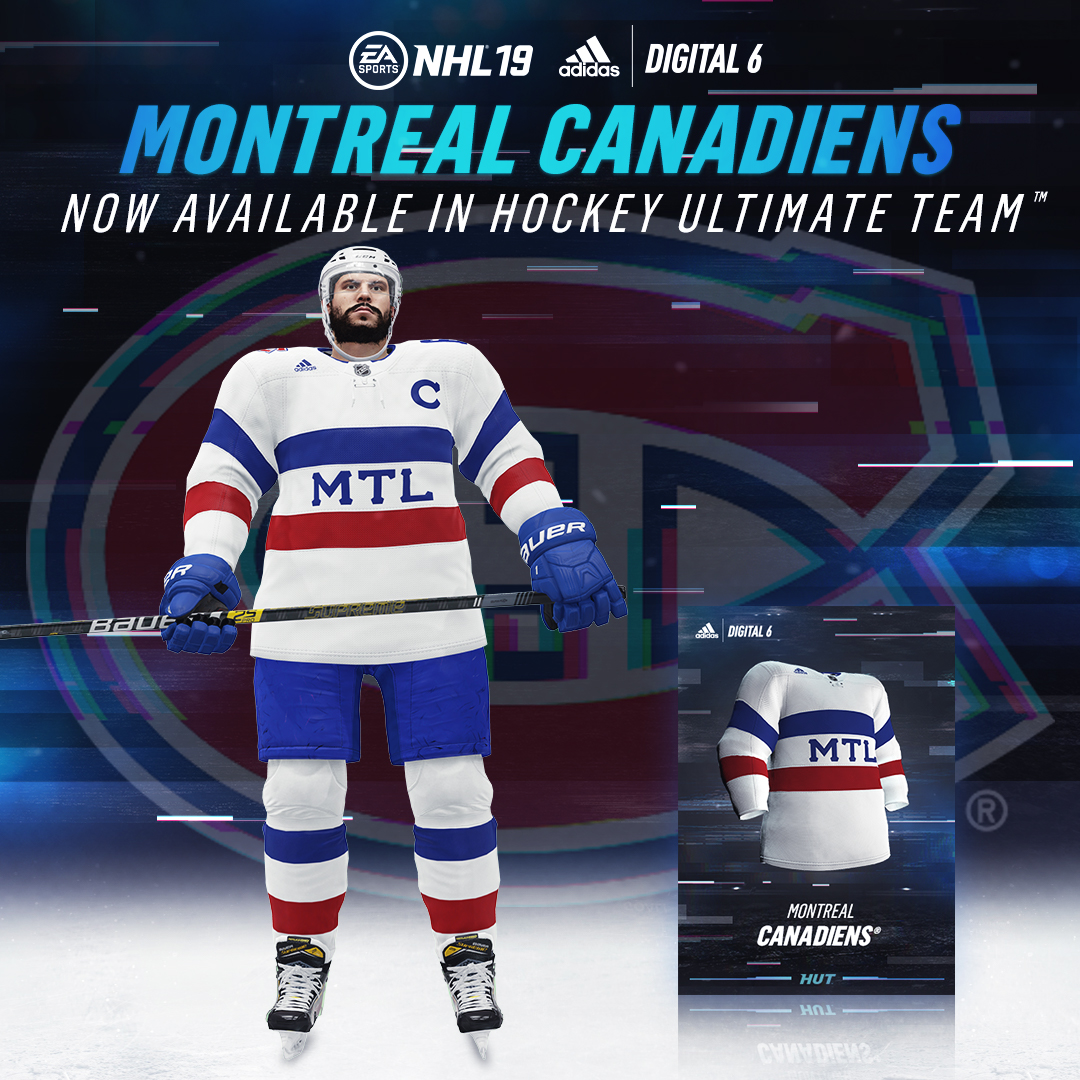 Although this might seem like a simple approach, Dexter said there's a lot going on with it. "I'm a native Montrealer, so if I had to choose, I would, of course, go with my favorite team's design," he said. "It's a completely new take on the classic Habs jersey design, and I love how it feels youthful in its integration of 'MTL' while still incorporating French heritage in its striping, as well as design elements from the traditional crest by moving the 'C' to the captaincy space on the chest. It just hits home." 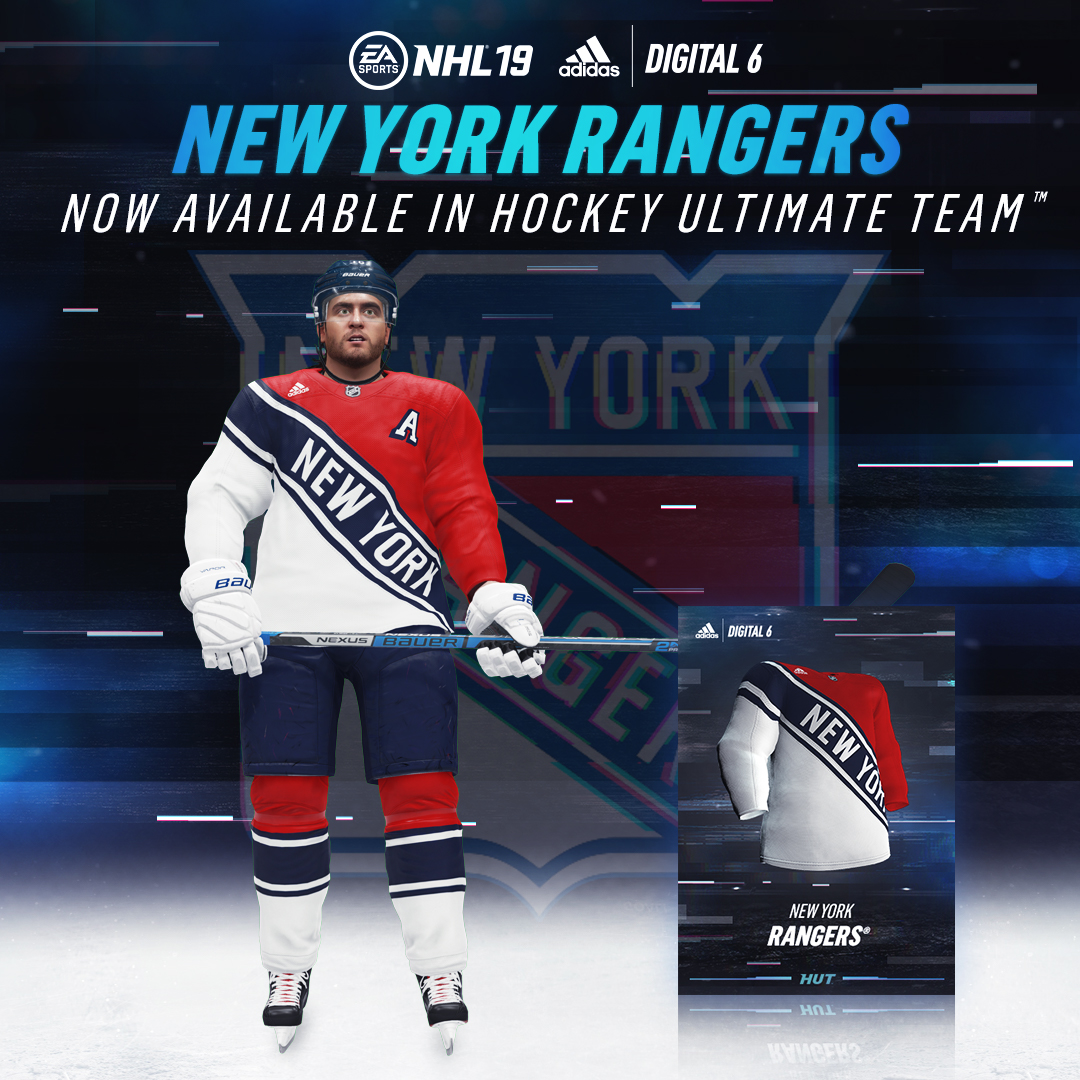 The influence for the Rangers' redesign was the team's primary logo, which is created here on a jersey in its full glory. Why "NEW YORK" and not "RANGERS" across the front? The designers felt that using the city's name would make it "larger than life." 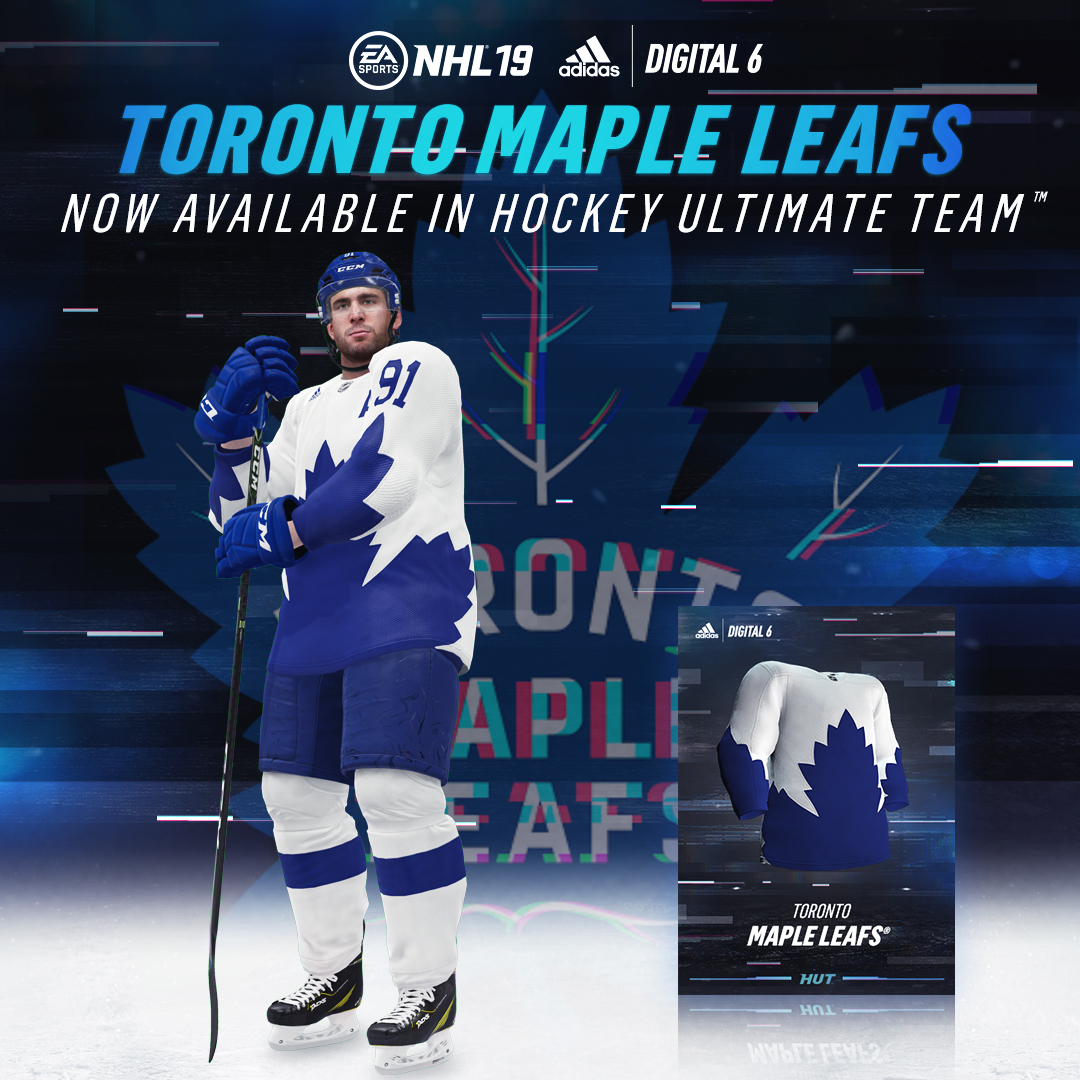 It isn't hard to draw comparisons between this Leafs jersey and the Canadian national team jerseys that seemingly inspired them. But Merrill wasn't worried about fans of other Canadian teams taking issue with the "Centre of the Hockey Universe" claiming a Team Canada look.

"I don't think so. This sweater is all about the two things that Torontonians love the most: the Maple Leafs and Canada. When the Leafs unfurl that rink-sized, blue-and-white Canadian flag with their logo as the leaf, even I get goosebumps," he said.

For now, these jerseys exist as Easter Eggs in "NHL 19," though they've been designed by the league's official gear-maker in consultation with Original Six teams.

Is there a chance that these sweaters could escape the game and enter the real world, should they prove popular enough?

"This is just the beginning. Fans want to rep their team in new and more exciting ways all the time. Looks that generate excitement in the digital world will inevitably have an influence on the physical world," Merrill said.