There's a moment for athletes when a potential professional career goes from aspiration to possibility. Maybe it's a championship or an on-field achievement. Maybe it's simply finding the right place at the right time.

For Dennis Cholowski, it was a grade -- which is only appropriate for someone who prides himself on knowledge.

Playing with the Chilliwack Chiefs of the British Columbia Hockey League in 2015, Cholowski was a smallish defenseman about a year away from a growth spurt and a player with undeniable upside. He had been given a C ranking by NHL Central Scouting, which rolls out those grades three times a season. Earning a C ranking is exactly as it sounds -- average, unremarkable, a player seemingly destined to end up in the middle rounds of the NHL draft, if that.

However, Cholowski worked hard after an underwhelming previous season, and Central Scouting took notice. The C player was elevated to a B player in the rankings that landed around Christmastime. Suddenly, Cholowski had crept onto everyone's prospect radar.

"That's when I started to realize that this is pretty serious here," Cholowski, 20, a native of Langley, British Columbia, told ESPN this week.

Was this like in school, when everyone compared grades and you had to help your C-grade friends cope now that you earned a B?

"Yeah, I guess you could say it's a little like that," Cholowski said with a laugh. "But I didn't talk to anyone about my ranking."

The Detroit Red Wings would end up making him the 20th overall pick in 2016. Following a year at St. Cloud State University in Minnesota and a WHL season in 2017-18 that saw him play for the Prince George Cougars and Portland Winterhawks, Cholowski joined a rebuilding Red Wings team this season. The results have been startling: two goals and six assists in 13 games while playing 20:41 per game.

"There were pros and cons to leaving college, but Dennis felt, for his hockey development, it would put him in the best position for when he commenced his pro career," Red Wings assistant general manager Ryan Martin told NHL.com recently. "For the better part of two summers, he also committed his own time to live in Detroit, train here and put on close to 20 pounds of muscle, and I think that helped tremendously. Our expectation coming into this training camp was that he certainly would be competing for a job."

In a season that has featured a bumper crop of great rookie defensemen -- Miro Heiskanen of Dallas, Henri Jokiharju of Chicago, Maxime Lajoie of Ottawa and 2018 No. 1 overall pick Rasmus Dahlin of Buffalo among them -- Cholowski has been outstanding, even as his team has lingered near the bottom of the Eastern Conference. There is a real notion that the Red Wings might be looking at the start of a first-pairing defenseman's career.

"[He's] done a good job," Red Wings coach Jeff Blashill said. "When he came into camp, we weren't sure where he sat within our group of young defensemen. I would have said he was on the outside looking in. But he earned his way on the team."

Earned -- and learned. Leaping to the NHL from the junior level is a trial by fire for some players, an immediate education. Cholowski said there wasn't one area to focus on, but many.

"It's more the accumulation of all the little things you have to learn -- the speed, the size. They're men now. They're in their 30s, bigger and stronger," Cholowski said. "They hit hard, that's for sure. But I can't say I've gotten rocked yet."

Cholowski spent the summer training hard and continuing to refine his defensive game to be NHL-ready, and he was rewarded with a spot on the Wings' roster.

"They wanted me to gap up tighter on guys in the neutral zone, take away time and space," Cholowski said. "If you don't do that with the super-skilled guys in the league, they're going to make plays. So take them on before they hit the [offensive] zone."

Was he ever overwhelmed by all these demands from the team?

Cholowski is the kind of guy who enjoys absorbing information. It's not just his "hockey IQ," which was honed at a young age as an undersized defenseman. "I was small. I had to be quick, had to use my brain, my smarts on the ice," he said. It was his thirst for knowledge, instilled by his father, John, who encouraged his sons to follow his educational path to becoming a mechanical engineer.

"My dad's one of the smartest people that I know," Cholowski said. "He sort of forced us to follow in his footsteps, take the same courses that he did. He wants his boys to be as smart as they can, keep up with their studies."

Like any kid whose interests were foisted on him by a parent, there was some initial bristling. But Cholowski eventually was persuaded, and he majored in engineering at St. Cloud State. He said the more you know, the better player you're going to be.

"I think when you keep up with your grades, you read books, it helps your hockey game," he said. "There's no way it hurts, right?"

It was a culture shock for Cholowski when he left his parents to head to Minnesota for school. That shock was eased when he met his girlfriend on campus.

"I don't see her that often during the year, mainly in the summertime," said Cholowski of his long-distance relationship as he begins his NHL career. 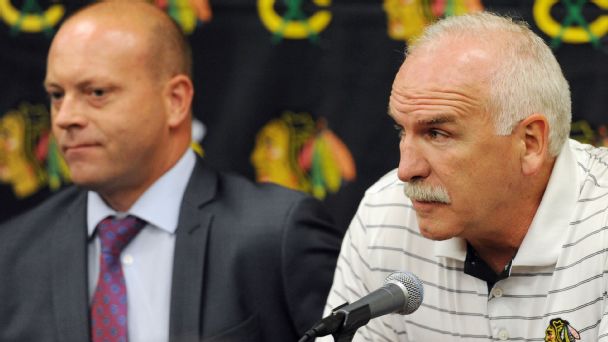 Emily Kaplan gives her take on the Chicago Blackhawks' firing of head coach Joel Quenneville (1:30). Kings president Luc Robitaille explains the firing of head coach John Stevens, among other topics (19:26). Emily and Greg talk about Uber-gate, the latest controversy in Ottawa (46:00). Plus, Sean McIndoe discusses his new book, "The Down Goes Brown History of the NHL" (51:25). Listen »

Being on your own is part of the NHL education. Honing your skills is part of the education. So is finding yourself across the ice from players you idolized as a child -- Cholowski had that moment when he faced Duncan Keith, Patrick Kane and Jonathan Toews during a preseason contest against the Blackhawks -- or players like Edmonton Oilers star Connor McDavid, whose mastery you've only seen on video screens.

"He's pretty good, I will say that," Cholowski said of McDavid. "You try to contain, try not to get burned. He's just another level, for sure."

In fairness, Cholowski has leveled up himself over the past few years. From that C-grade prospect to the B-level one. From the middle rounds to the first round. From the WHL last season to the NHL this season, with an Original Six team no less.

"Some things have changed in the last few years, with the new rink and everything. But the history is still there," Cholowski said. "The Red Wings have one of the longest histories in the NHL, and it's extremely cool to be here."