As we near the end of the calendar year, every NHL team has a wish list. Though many teams will make tweaks during the season, the biggest changes tend to come in summer.

For this week's power rankings -- voted on, as always, by a panel of ESPN experts -- we glanced at the biggest contract quagmire looming for each team after the season, whether it's a pending restricted free agent, unrestricted free agent or a mix of both.

The Lightning are committed to taking care of restricted free agent Brayden Point. Since the beginning of last season, only Nikita Kucherov, Connor McDavid and Nathan MacKinnon have more even-strength primary points than Point. How do you squeeze another massive contract in while Steven Stamkos makes $8.5 million and Kucherov will be at $9.5 million? This will take some creativity.

Auston Matthews' next contract feels like the easy one; just give the center max money. Mitch Marner, who is on pace to shatter 200 points on his entry-level contract, is the trickier dilemma. The cap crunch, especially if Marner is paid appropriately, is a dangerous line for new GM Kyle Dubas to toe.

It should be autopilot mode for the Predators, who likely will give new contracts to pending RFA depth forwards such as Ryan Hartman and Kevin Fiala -- unless this team implodes in the playoffs yet again. Then GM David Poile might do something drastic.

The Jets are going to need to pay Patrik Laine, and it's going to be a lot of money. Considering Kyle Connor is due for a new contract too, the cap-strapped Jets likely can't sign both Jacob Trouba (RFA) and Tyler Myers (UFA) to deals they deserve. 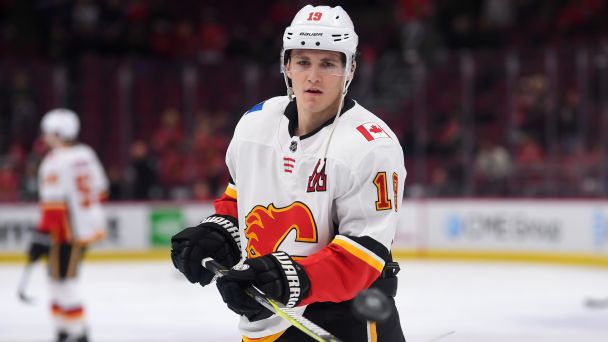 On his 21st birthday, Calgary forward Matthew Tkachuk joins Emily Kaplan and Greg Wyshynski to talk about his red-hot Flames (13:52). Plus, hear what he had to say about the William Nylander signing. Then we go through the biggest disappointments across the NHL so far this year. Tracey Myers of NHL.com joins to discuss the struggling Chicago Blackhawks (33:30). Plus, "Phil Kessel Loves Hot Dogs," Puck Headlines and more! Listen »

Winger Matthew Tkachuk told us on ESPN on Ice this week that he followed the William Nylander negotiations closely. Nylander's $6.9 million cap hit was a boon for pending restricted free agent Tkachuk, who is now on pace to be Calgary's highest-paid player ever (and will certainly surpass Mark Giordano and Johnny Gaudreau).

The Caps are going to have to make a big decision on Andre Burakovsky, whose qualifying offer would be $3 million but who has underwhelmed in his contract year. (The 23-year-old has just eight points in 29 games and was a healthy scratch Tuesday.) Could he be traded before the season is up?

There's no question on whether to give Mikko Rantanen a big contract; the question is how big. The young Finn is playing like he deserves a max deal. But with star linemate Nathan MacKinnon on a bargain $6.3 million, will it be awkward if Rantanen makes well north of $8 million?

Jeff Skinner is tearing it up on Buffalo's top line (21 goals in 31 games) thanks to chemistry with Jack Eichel. The 26-year-old will have many suitors this summer. Would familiarity and a contract worth roughly $8 million per year entice Skinner to stay?

It's not really their decision to make, but the Erik Karlsson contract situation is a tenuous one, and fascinating to follow. He hasn't performed quite as expected in his new hockey home thus far; however, that doesn't mean the Sharks won't try to lure him to stay long term.

The renaissance man Eric Staal scored 42 goals in his age-33 season. He's due to dip a bit this season, but he's still a top-producing center and has said he'd like to stay in Minnesota. The question is, are the Wild willing to pay more than the $3.5 million he's making now?

In one of the most anticipated arbitration cases in recent memory, William "Six-to-43-Goal" Karlsson and Vegas agreed on a one-year, $5.25 million contract. Karlsson's shooting percentage has calmed, but he's still on pace for about 25 goals. What does a new contract look like for him?

What does the future hold for Jakob Silfverberg? He's on pace to finish with about 40 points yet again, though he remains good on the defensive end. The Ducks want to transition younger, meaning the 28-year-old might be expendable as he enters unrestricted free agency.

One of GM Jim Nill's biggest dilemmas will be whether to keep Jason Spezza next season, and at what price. The 35-year-old center, on the last year of a contract that pays $7.5 million annually, recently told Sportsnet he'd be willing to take a pay cut on the next deal, as long as he'll have a good role.

Columbus will offer a new deal for RFA Zach Werenski and hope that UFA Artemi Panarin might pivot and stay. The big decision: Can this team allow two-time Vezina Trophy winner Sergei Bobrovsky to get paid handsomely elsewhere? (And should they trade him this season to recoup some value?)

Montreal isn't in terrible shape, with all of the top-10 scorers under contract next season, and none have a higher cap hit than $5.5 million. Perhaps the Habs wipe pending UFA Jordie Benn's contract off the books and upgrade in free agency with a high-profile defenseman?

Do the Oilers have the guts to part with Jesse Puljujarvi, the No. 4 pick of the 2016 draft? He still hasn't found his NHL footing (30 points in 112 games), but the pending RFA has too much talent for them to simply let him leave. Perhaps a cheap bridge deal is best.

Top order of summer business is a new (big) contract for Jake Guentzel. The Penguins will want to shore up the blue line too, with Juuso Riikola and Marcus Pettersson becoming RFAs, and depth guy Chad Ruhwedel becoming a UFA. Pettersson has impressed in his short stint; keep it up, and he's a lock.

Center Kevin Hayes is on a career pace (0.70 points per game), but the 26-year-old feels like a rental on his own team who is straddling the we're-not-tanking-but-we're-also-not-a-contender line. The pending UFA should test the open market, despite being a big part of New York's surprise success.

The Red Wings are trying to rebuild (it's hard when they keep winning!), making a decision on a player such as Gustav Nyquist so difficult. At 29, he's on pace for career highs in assists and points per game. A new Nyquist contract (or noncontract) will be a good litmus test on GM Ken Holland's renewed discipline.

The Canes should designate Sebastian Aho (RFA) as a franchise cornerstone. Easy. Teuvo Teravainen, also an RFA, should be right behind him. But what to do about leading goal scorer and upcoming UFA Micheal Ferland, who could generate nearly double his $2.86 million salary on the open market?

The Coyotes badly coveted Nick Schmaltz, and he's showed why in his short stint so far (seven points in seven games). A pending RFA, Schmaltz may be in the Coyotes' plans as their No. 1 center of the future thanks to chemistry with Clayton Keller. How might that manifest in a second contract?

The Canucks have seven RFAs this summer, though the one that will garner the most attention is winger Brock Boeser. He's one of many high-profile young stars to reach that status this summer, but where does he fall in the pecking order of Laine, Tkachuk, Point, Matthews, Marner, et. al.?

Oh, what to do about Wayne Simmonds? He's 30 years old, can still produce and would like to end his career in Philadelphia ... but that means something like a six-year deal. Former GM Ron Hextall was reportedly far off from that ask; where does new GM Chuck Fletcher stand?

The Panthers are well-positioned, with most of their core players locked in (under reasonable contracts, too). To get to the next level, though, the Panthers must decide if they can acquire yet another top forward, as they did with Mike Hoffman this offseason.

The Senators will have the league's most fragile roster this summer. They can't afford to lose both Matt Duchene and Mark Stone, though it's a possibility. Salt on the wound? Duchene walks, the Avalanche end up with Jack Hughes (as owners of the Sens' first-round pick) and last November's trade is remembered as a colossal Ottawan bust.

Considering the way this season is trending -- with no end to the struggles in sight -- we have a feeling GM Doug Armstrong may want to clean house. That means not reupping with some UFAs, such as Jay Bouwmeester, will be an easy decision.

The Devils are in a goalie conundrum. Cory Schneider is on the books until 2021-22, but he may never regain his old form. Serviceable backup Keith Kinkaid becomes a UFA. New Jersey might need to take a run at a new No. 1.

Alex Iafallo is playing on the Kings' top line, but, as with many Los Angeles players these days, he's struggling. With Iafallo in the final year of his entry-level contract, Los Angeles must figure out a reasonable price for the 22-year-old while also pondering the desire for full roster turnover.

The Blackhawks don't have too many tough decisions to make on the current roster; rather, how will they spend what could be up to $20 million in cap space? The free-agent market should be improved from last summer; a top blueliner and top-six forward are both on the wish list.