All 31 NHL teams have reached the official midway point of their season, so in addition to this week's updated rankings, we are offering our take on which teams will finish under or over their current projected points pace.

Points pace: 130. The Lightning are on pace for the best regular season since the Red Wings amassed 131 points in 1995-96. They're a full-on juggernaut, but there's a reason no one has cracked 130 points in 23 years. Under.

Points pace: 109. The Leafs were a 105-point team last season, so this mark is very much in reach. As long as goaltender Frederik Andersen remains steady (and healthy), this team will hit 110 points or better. Over.

Points pace: 109. The Flames are for real, and that plus-31 goal differential isn't just a product of better-than-expected goaltending. (And a .902 save percentage is ahead of where we thought they'd be.) Getting to 108 points in the wacky West is a tall order, but they're 100 percent a 100-point team. Under.

Points pace: 104. Due respect to the Sharks' recent roll and the return of Erik Karlsson to public adulation, but I can't trust a team with a .893 save percentage to stay on this pace. However, it's a playoff team, for sure. Under.

Points pace: 104. The Predators were a 117-point team last season, and this current pace comes after three months of significant injuries to top players like Filip Forsberg and P.K. Subban. A fully armed and operational Predators team will power past this current pace. Over.

Points pace: 109. This would be ahead of where the Capitals finished last season. As Alex Ovechkin showed with his All-Star Game decision, Washington knows that slow and steady can win the race again. Under.

Points pace: 109. The Jets are at this pace with Connor Hellebuyck playing to a .909 save percentage and Patrik Laine with one goal since Dec. 16. Those trends are going to reverse, and GM Kevin Cheveldayoff is going to pull off another Paul Stastny-esque move at the deadline. Over. 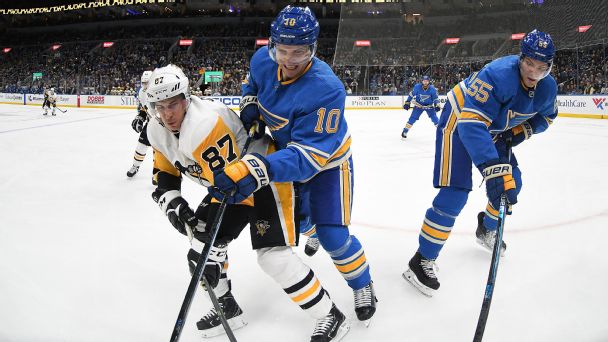 Points pace: 103. The Knights are probably a team that lands at around 100 points, but if there's anything we've learned in the past year, it's to not bet against Vegas. Over.

Points pace: 103. The goaltending has figured itself out, Sidney Crosby is playing at an MVP level and they're on an 11-2-0 roll. To quote an ancient ad campaign for an adult beverage: Beware of the Penguins. Over.

Points pace: 103. The Bruins and Leafs will flip-flop in the standings, with Toronto getting the No. 2 seed and home ice and Boston getting right around 103 points. Conservatively, we'll say they're just a shade below it. Under.

Points pace: 100. The teams chasing the top three in the Metropolitan are starting to close the gap a bit. We're a little worried about what GM Jarmo Kekalainen does with Artemi Panarin and Sergei Bobrovsky. The Jackets have been a 100-point team only once in franchise history. John Tortorella has hit that number only three times in 14 full seasons as an NHL coach. Under.

Points pace: 100. The Islanders are riding the PDO train this season (102.82 in combined shooting and save percentages). They're an amazing story, and they could very well be a playoff team, but they're probably also crossing the finish line with double-digit points. Under.

Points pace: 93. If team president Jim Lites can savage his best players in profanity-laced tirades to the media every month or so, they're money. (Also, it'll be a big help if Ben Bishop keeps doing what he's been doing.) Over.

Points pace: 89. This pace has steadily decreased in the past two weeks, as the Avs have tried everything, including breaking up their heralded top line. The West is an absolute meat grinder, but I think the Avs can get back around that 95-point plateau. Over.

Points pace: 95. Middle of the pack in offense and defense, but not too reliant on one line to carry them. Claude Julien is a stealth Jack Adams candidate for squeezing as much juice out of this team as he has. Under.

Points pace: 88. It's a Bruce Boudreau team, which means it will ultimately exceed expectations and end up in a playoff spot even if it has no business being there. Over.

Points pace: 86. The Ducks have come back down to earth with the velocity of Skylab, as John Gibson's back strains from carrying the sixth-worst possession team and second-worst offensive team to the playoff bubble. We were right about Randy Carlyle, you guys. Under.

Points pace: 80. The Canucks are a team with some true offensive dynamos, but one that has trouble preventing both shot attempts and goals from opponents. This is, like, an 82-point team, but one that's at least going to be exciting to watch even as their playoff hopes fade. Over.

Points pace: 88. I refuse to believe that we're witnessing yet another season of incredible possession numbers that are submarined by either terrible goaltending or invisible offense. This year, it's the latter, as the Canes have a 7.3 shooting percentage, worst in the NHL. Ugh ... but they're better than 88 points. They have to be. Over.

Points pace: 82. Fun fact: Ken Hitchcock hasn't had a team finish with a points percentage lower than .625 since his final campaign with the Blue Jackets. It's going to happen this season, for sure, but the Oil are going to be better than 82 points in Peter Chiarelli's swan song. Over.

Points pace: 82. One of my chillier freezing cold takes is that the Panthers would be a 100-point team this season, which they most certainly will not be. Unless, of course, they go on some ridiculous winning streak, on which I've now dolloped a freezing cold take on top of a now-much-warmer take. Over.

Points pace: 80. This points pace doesn't take into account the roster pruning that most certainly will occur again at the trade deadline for the Rangers. Under.

Points pace: 76. If the Coyotes finish with 76 points, it will be the first six-point year-over-year improvement that ultimately feels like a downgrade. Over.

Points pace: 76. Wait: Are you saying we shouldn't expect a team with only two true finishers at forward and goaltending that's ranked 26th in save percentage will hit 97 points again? We still wager they get over 80. Over.

Points pace: 71. While doing as poorly as possible would behoove the Hawks in the long term, the fact is that this combination of prideful veterans and young players trying to earn their keep will be better than this current pace by season's end. Over.

Points pace: 71. This is right around where we expect the Wings to end up before a really, really interesting summer in Detroit when it comes to managerial decisions. Eh, we'll take the under for the sake of the draft. Under.

Points pace: 76. It's a lost season for the Blues, but one that'll see them beat this current pace. Perhaps via copious amounts of starts for Jordan Binnington over Jake Allen. Over.

Points pace: 69. Who ends up with more points: the Kings in the standings, or their leading scorer this season? In any case ... Under.

Points pace: 69. In the time it took you to read this, the Flyers just started five more goaltenders. Over.