Mention Jonathan Cheechoo's name, and a number immediately springs to mind: 56, as in the number of goals he scored in 2005-06 to win the Rocket Richard Trophy as a 25-year-old right wing for the San Jose Sharks.

It was the year Joe Thornton arrived in San Jose, putting up 92 points in 58 games in a Sharks sweater (123 points overall) to win the Hart Trophy. His first game was Dec. 2, 2005. Cheechoo would score 49 of his 56 goals after that point.

He followed that with a 37-goal season for the Sharks, and then a 23-goal campaign, and then ... that was basically it. Cheechoo would play 127 more games in the NHL with San Jose and the Ottawa Senators through 2010, scoring just 17 goals. The rest of his hockey career was spent in the AHL in places like Peoria and Oklahoma City, and then he spent for four years in the KHL before officially retiring in 2018.

But his legacy, and his popularity, remain salient to Sharks fans. Cheechoo was a guest at the NHL All-Star Game fan fest in San Jose last weekend, meeting and greeting fans who still roam the arena wearing his name on their backs. While his career might have achieved "one-hit wonder" status, his journey to the NHL is the stuff of legend: Born in Moose Factory, Ontario, a town 500 miles north of Toronto; a Cree First Nations member who somehow found his way to the NHL and briefly became a star.

We spoke with Cheechoo and listened in on his Q&A with fans. Here's a Sharks legend, reflecting on his memorable run in the NHL.

ESPN: What does it mean to you to come to a fan fest like this and still see people wearing your name on their backs in 2019?

Cheechoo: It's pretty cool. I played here for a long time, but it's neat to see that the fans still remember and how many of them actually have a Cheechoo jersey. It's pretty cool, that's for sure. When I meet them, they're pretty excited. I think I was a fan favorite here. You always hear one or two [Cheechoo] train whistles. They cheered me on when I was here, and seeing them now is really cool.

ESPN: From a player's perspective, how important is it do things for fans?

Cheechoo: I grew up in Moose Factory absolutely loving hockey and dreaming of hockey. I went to an Edmonton Oilers game when I was 6 years old and met Mark Messier. He showed me his Stanley Cup rings. Guys like Paul Coffey were really gracious, taking time to sign stuff when they were coming into the arena. I never forgot that growing up. There are fans that come to [festivals] and stay after game for an autograph, and you want to be gracious to all of them, because it could be someone else's first game. Taking the time out to sign something is not a big deal. As a player, you should take that time. It's just being a nice person, and making someone's day.

ESPN: Tell me about Moose Factory.

Cheechoo: It's a little town in Ontario. It's a Native community: half reserve, half non-reserve. Went to school there until I was 12. A lot of hunting and a lot of fishing. It's pretty expensive to get meat in there, so we did a lot of that for our food. I miss that. It's a pretty cool place. All the families there know each other. We actually have a little Native NHL hockey tournament. It's called the Little Native Hockey League. My son gets to play on it for my home team, because he has the status card for being half-native.

ESPN: I have to imagine it was a pretty big deal to have an NHL player come out of that community.

Cheechoo: Oh, for sure. I was the first Cree from that area to ever sign a contract. I was excited just to get drafted. And all my people came down to the draft that year. They were so noisy, they had to hold up the picks for a few minutes. [Laughs] But everyone settled down. All the people were loving it. It's not very often something like that happens.

ESPN: What was it like to hold the Rocket Richard Trophy?

Cheechoo: For me, that was awesome. I used to watch Pavel Bure do it. I didn't quite get to 60 goals, but I was close. And I got to share it with the people that were there for me all the way up. My parents. My brother and sister. A few of my uncles that used to take me to hockey school when my parents couldn't. I had never walked on a red carpet before, so that was kind of cool. But the trophy is super heavy. I saw Joe [Thornton] there holding two of his trophies pretty easily, and I'm like, 'I'm not THAT weak.' But then I picked up one of his and it was so light. I don't know about mine. It had cement in there or something.

ESPN: When you think back to the 56-goal season, how do you process it? Is it surreal?

Cheechoo: I had built up to that, you know? I had nine my first year, 28 my next year. And then Joe [Thornton] came and 15 games into the season, we just clicked. It was one of those things where we had instant chemistry and we got along really well, too, so it was easy to keep it going. We have a magical run there. I think I had 49 goals in 53 games or something crazy like that. But I got hurt. Got slowed down by the hernias after that. We still had the chemistry, but maybe we didn't get a chance to play with each other enough. That was the last full season I played.

ESPN: So when you get that "hey, whatever happened to..." question, is that usually the answer? The injuries happened?

Cheechoo: Yeah, pretty much. Everyone loses a step eventually. For me, it was my hernias, my legs, my knees ... everything added up eventually. It was harder to train the way you need to in order to play at that level. It was good to relax at one point. I took half a year off during the 2012 lockout. I had more time to let my body heal. I hadn't done that since early in my career when I had about six months off for some reason, and I just went home and hunted. Getting that time, I felt great again. Played in the AHL and then went overseas, and never had injury problems again until my last season. 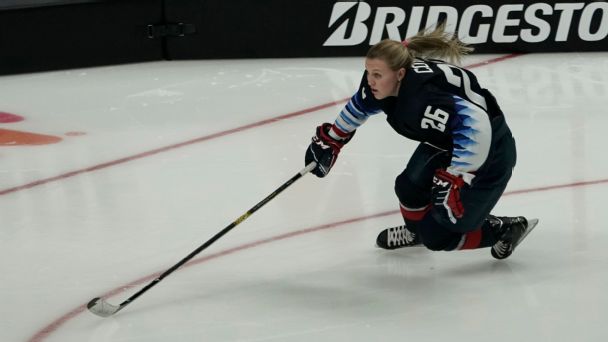 Greg Wyshynski and Emily Kaplan have plenty to talk about following their coverage of All Star Weekend. Two-time Olympic medalist Kendall Coyne talked to Emily about her historic participation in the All-Star Skills Competition (12:08). The Athletic's Aaron Portzline talks about Artemi Panarin's decision to not sign an extension with Columbus prior to the trade deadline (36:33). Listen »

ESPN: How did you work through the "what if?" of your career? Like, if it wasn't for the injuries, maybe you win a few Rocket Richard trophies?

Cheechoo: Yeah, it was tough. [Pauses] But, I mean, it was inevitable with the way I played. I threw a lot of hits. I think I led my team a couple of times. But my body didn't stand up. Alex Ovechkin scores goals and plays a physical game, but his body has stood up. He avoids injuries. It's great for him. He's one of my favorite players to watch. But for me, the injuries took their toll. And that's OK.

ESPN: You seem like you're in a really good place about it.

Cheechoo: I had a great career. I enjoyed it. I never thought I'd make it from Moose Factory, but I made it, and that's the highlight. Playing my first game was the moment I realized that I had realized all my dreams. I lined up against Brett Hull my first shift. I didn't know if I should ask him for an autograph or not. I think I slashed him instead.

ESPN: Finally, I've wanted to ask you this my entire life: Were you aware of the "Train, Train Cheechoo Train" music videos that Aaron Bell created in your honor? Because they were honestly some of the strangest things I've ever seen in hockey fandom.

ESPN: That was the one where he dressed up as "The Mayor of Awesome Town, a.k.a. Peoria" and offered you his car keys as the "keys to the city" and also a baby.

Cheechoo: Yeah, that one. He actually came down to a game. I met him, shook his hand. It's actually pretty cool to have someone doing something like that for you. All those songs. And the fans love those songs because he's singing about me and their city.

ESPN: He never made one for Russia, though, when you went to the KHL.

Cheechoo: Maybe he retired after he finally met me, I don't know.