Center Auston Matthews and the Toronto Maple Leafs agreed to a five-year contract extension that'll pay him $58.17 million through 2024. Here's a look at the ripple effects of this deal, with some distinct winners and losers.

Welcome to the new NHL, where 21-year-old stars dictate terms to 33-year-old general managers. Matthews gets a contract with an average annual value of $11.634 million, or 14.6 percent of the current cap. This is less than Edmonton Oilers star Connor McDavid (16.67 percent) but much more than Buffalo Sabres center Jack Eichel (13.3 percent) snagged on his second contract. That he got that value on a contract that eats up only one year of unrestricted free agency is extraordinary, and it means Matthews is going to be in his prime when UFA status hits. (If you thought the John Tavares circus was something, you ain't seen the Matthews circus if he decides to walk.) 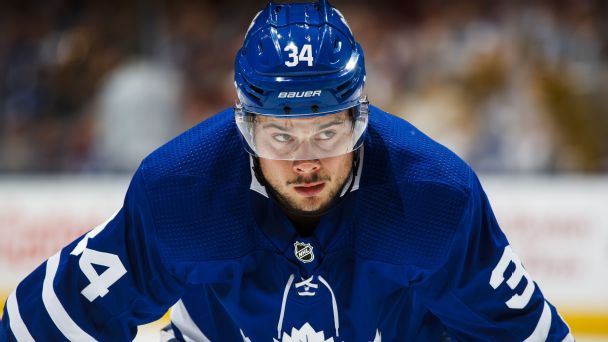 As the podcast was being recorded, Auston Matthews signed a five-year contract extension in Toronto. Sportsnet NHL Insider Chris Johnston joined the show to react to the deal and its impact on the rest of the NHL (14:30). Five-time Olympian and Hockey Hall of Famer Jayna Hefford talks about the future of women's hockey (35:49). Listen »

The Leafs prayed they could get him for under $11 million on a shorter term, and Matthews got 'em for $11.634 million, with 93 percent of it paid in signing bonuses. He got paid, he got flexibility and he gets to have a competitive team around him while making $15.9 million in each of the next two seasons. That's going to buy a lot of fancy coats.

When asked about how his contract was inexorably linked to that of Mitch Marner, a fellow restricted free agent, Matthews said he wasn't concerned about it.

"We just want to play hockey and have fun. We have agents for this stuff," he said at the NHL All-Star Game.

This is true, and if we were Marner's agents, we'd be furious with Matthews having decided not to break the bank on a max-term deal. Just like a rising tide lifts all boats, the rising average annual value of one 21-year-old franchise player would inevitably have lifted that of the other. There's no debate that Matthews at five years and $11.634 million adversely affects Marner's asking price vs. what it could have been at eight years and, say, $13.5 to $14 million AAV.

So we're doing the six-year window thing in Toronto. That's the Shana-plan. The Matthews camp, by all accounts, wanted to get an eight-year term done last summer, and the Leafs didn't really have a desire to do it. With this five-year contract, Leafs general manager Dubas is essentially trading three contract years of Matthews for upward of $2.5 million in cap space annually to either keep the core together or to have the flexibility to add to it.

Heck of a gamble. But the Chicago Blackhawks won three Stanley Cups in the span of six seasons, and they certainly didn't have the one-two punch at center like the Leafs now have. On top of all of this, his average annual value for Matthews depresses what Marner's camp could ask for, which is shrewd. As it stands, Dubas is going to try to get Marner closer to Nikita Kucherov ($9.5 million AAV) than Matthews, and this contract makes that more feasible.

As previously noted, the Matthews camp reportedly wanted to get something done last summer, before he had 23 goals and 23 assists in 38 games in his third NHL season. His bargaining power has risen as quickly as his points-per-game average. For whatever reason -- the contracts need for William Nylander and Marner, perhaps -- the Leafs missed their window in which to get Matthews in for somewhat less and significantly longer.

Now, this could move back to the winner category if Matthews re-signs with the Leafs after five years for an eight-year term, potentially taking him through his mid-30s on a long-term deal rather than into his late 30s on a third deal (after a second contract of eight years). There are no guarantees this'll happen, but the thought has no doubt been mulled by Dubas and his cabinet.

Tavares signed with the Maple Leafs not just because their logo was on his bedsheets, but because he felt they had a better shot at winning the Stanley Cup than did the New York Islanders. This Matthews contract, for Tavares, is a step in that direction, allowing the Leafs to open a six-year window to win with significantly better cap flexibility than if Matthews had signed for a much higher AAV. The last thing Tavares wanted to was to be on a top-heavy boondoggle that can't add significant pieces to a championship puzzle. Meanwhile, he's making $11 million against the cap with a full no-move clause through 2025. It's good to be Johnny T.

Look, I know that centers get paid more than wingers. I know that dollars in Florida go farther than dollars in Toronto due to a lack of state income tax. I know that he's a few years older than Matthews. But I also know he can read a stat line, and this season he sees his 1.54 points per game compared to 1.21 for Matthews. And he can read CapFriendly, which shows him locked into a $9.5 million average annual value through 2027 on a contract signed last July, while Matthews and soon Marner are going to blow that away.

Maybe he's cool with this now, because good-soldier contracts like his have allowed the Lightning to build a Cup contender. But although he plays superhuman hockey at times, he's only human.

Great news for Mikko Rantanen, Brayden Point, Sebastian Aho, Patrik Laine, Matthew Tkachuk, Brock Boeser and, yes, Mitch Marner: You too could sign a five-year deal approaching 14.6 percent of the current cap that gobbles up only one year of unrestricted free-agent status!

The Matthews contract resets the market for teams seeking to go with a shorter term with their great young players. It's an absolute game-changer to that end. It also removes Matthews from the offer sheet threat, which means ...

The expectation around the NHL is that someone who's desperate enough and who has the economic power to do so -- [COUGH] the Detroit Red Wings [COUGH] -- will tender an offer sheet to one of this summer's crop of RFA forwards. This Matthews contract sets a new bar, and opens up a few new possibilities for poachers looking to be creative, and raises the price for teams that are already staring at the ceiling.

After the William Nylander saga, to have this Auston Matthews situation end during the season without any lingering drama into the postseason or summer is a glorious thing. The future is going to be what it is, but to have a solid window in which is finally win a Cup -- and management that seems to have a discernible plan in which to do so -- is frankly un-Leaf-like.

Oh well, no massive offer sheet to try to bring the native son home to be the face of the Desert Dogs. But unrestricted free agency looms in 2024 ... assuming there's still a team in Arizona with which Matthews can sign.