Ah, love is in the air. This Valentine's Day, it's all about new love in the NHL. In this week's Power Rankings, we identify the players whom teams (and fans) have fallen for this season.

How we rank: The ESPN hockey editorial staff submits polls ranking teams 1-31, and those results are tabulated to the list featured here. Teams are rated through Tuesday night's games, taking into account overall record, recent success and context such as injuries.

Nikita Kucherov has been the leading man all season. With a league-leading 88 points (and seven in his past two games), he could be staring at a Hart (Trophy) in June.

You can count on Joe Thornton to make a Monday night special. This Monday, he surpassed Gordie Howe for all-time career assists, passed Shane Doan and Johnny Buyck for games played, and tied Teemu Selanne for points. 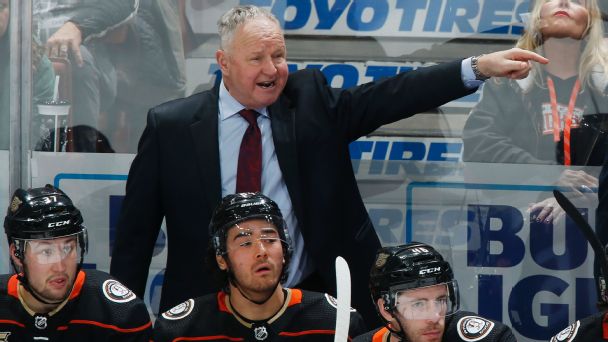 Despite their first three-game losing streak of the season, the Jets are back atop the West. They're hoping that true love can melt a frozen heart, with Patrik Laine looking to break out of a cold spell (two goals in his past 25 games).

We've admired the Flames all season, but it hasn't been a great February so far (one win in five games), as Matthew Tkachuk (eight-game goalless streak) and Johnny Gaudreau (six) are stuck in droughts.

Jake Muzzin and Auston Matthews? That's obvious. Lately, the Maple Leafs are low-key crushing on Andreas Johnsson; the Swede is coming into his own, especially after a recent seven-points-in-three-games stretch.

What's so wrong about loving two goalies equally? Robin Lehner has gotten a bit more attention, but Thomas Greiss is only a slight step behind and has gone 4-0-1, saving 154 of 157 shots (.981 save percentage) in his past five games.

Predators fans better fall in love with Brian Boyle (and at least show some affection for Cody McLeod) because there's a chance that's all they're getting ahead of the trade deadline.

Are the Bruins once-bitten, twice-shy deadline lovers after the Rick Nash acquisition didn't yield a perfect connection a year ago? Perhaps, but we think they might swing for the big names this deadline anyway.

Nate Thompson was the more important acquisition (can kill penalties, is a left-handed faceoff specialist), but Dale Weise -- aka "the Dutch Gretzky" -- was already a cultish fan favorite from his previous service in Montreal.

You know you're madly, deeply in love when you won't hold a grudge. Evgeny Kuznetsov's early-season slide already feels long forgotten. The Russian center has seven goals and eight assists in his past nine games.

The Blue Jackets are so smitten, they're not even acting like themselves. Ever since Martin St. Louis signed on as a consultant, Columbus' woeful power play has gone 5-for-16 (31.3 percent), the third-best mark in the league in that span.

He has bounced in and out of the lineup and has a small sample, but Vegas fans have crushed on Brandon Pirri all season. He has 12 goals in 20 career games with the Knights.

GM Jim Rutherford acquires a player; the team is smitten. First this season, it was defenseman Marcus Pettersson. Now attention shifts to Nick Bjugstad, who already looks comfortable on the second line.

The 2018-19 Stars haven't established an identity yet, but plenty of teams envy their goaltending. Ben Bishop and Anton Khudobin have been spectacular (both have a save percentage of .924 or better).

You know when you were looking for love, and it was right in front of you all along? Micheal Ferland felt destined to be shipped at the deadline, but Carolina might now keep the winger as its own rental.

The Blues have been blinded by love in the form of a mystery newcomer. Jordan Binnington was a minor league afterthought to begin the season. This week, he was the NHL's No. 1 star (3-0, 1.31 goals-against average, .954 save percentage last week).

The Wild could be big players at the deadline, but first, they'll want to send a Valentine to one of their own: Zach Parise, a year removed from back surgery, is having his best statistical season since 2009-10.

The Sabres love their captain, Jack Eichel, for nixing euphemisms and telling it like it is. Like this declaration last week: "I think the moral victories are a thing of the past at this point."

Gritty might have had a two-month head start, but Carter Hart is making a late, great push to be Philadelphia's ultimate sweetheart. Over the past month, he's 8-1 with a .931 save percentage.

The Canucks have been swooning for their uber-rookie Elias Pettersson ever since his debut. The Swede is now the fastest rookie to 25 goals since Alex Ovechkin.

It has been a bumpy season for the Yotes, but Darcy Kuemper has been all right: Since Jan. 1, he's 8-2-3 with a .920 save percentage, including a 41-save win over Vegas on Tuesday.

Sometimes it feels like fans adore Colorado's top line and nobody else. But there has been some secondary scoring from an unexpected source: 33-year-old Carl Soderberg is trending for a career season.

Dylan Strome was a high draft pick in distress in Arizona. The Blackhawks saved him, and he's heating up (17 points in his past 10 games) while reigniting chemistry with former OHL teammate Alex DeBrincat.

Of course, Rangers fans are still in love with Henrik Lundqvist. But last week, we caught them sneaking glances at 23-year-old Alexandar Georgiev after he recorded 55 saves against Toronto, the second-highest one-game total in franchise history.

Since this season has been blah, it's all about lust for the Panthers. They're not exactly being coy about whom they're crushing on: Sergei Bobrovsky and Artemi Panarin.

On one hand, you have to like this team for not quitting on the season. But maybe it's time to lose for Jack Hughes?

Oilers players probably won't be giving chocolates to Ken Hitchcock, especially after the coach's public scolding about a lack of commitment last week.

The Red Wings have googly eyes for Gustav Nyquist. At 29, he's playing some of his best hockey and could yield one of the biggest returns in the trade market.

There isn't much to love in Anaheim right now. Sometimes, you just need to wallow in sadness before it can get better.

It could be a long, lonely Valentine's Day for the Devils, who have dropped eight of their past 11 and had to say goodbye to fan favorite Brian Boyle. They did add a local boy, though -- Morristown native Kenny Agostino -- via waivers.

Mark Stone and Matt Duchene have both expressed interest in sticking around, but the feelings might not be mutual (on contract terms, that is), and the Sens could be shipping one or both away.