The first was that Boston Bruins rascal Brad Marchand was voted by his peers as the league's best trash-talker (21.8 percent) ... and also its worst trash-talker (12.5 percent). In fairness, "worst" can take on a variety of meanings, so some of these votes could be for a 'no target spared' approach to chirping. Or, more likely, playing against Marchand is like watching a "Deadpool" movie, where the capacious quantity of the jokes leads to equal piles of guffaws and groans.

The second was that Connor McDavid of the Edmonton Oilers and Sidney Crosby of the Pittsburgh Penguins were first and second, respectively, in three different categories: best forward, most difficult player to play against, and the player you'd select first were you starting a new franchise.

Also in this week's Wysh List: The Week in Gritty | Jersey Fouls
Eugene Melnyk vs. fake fans | Puck Headlines
Player of the World of the Week

This stands in contrast with the previous year's poll, which was more extensive and far more interesting. In the four categories in that poll in which Crosby and McDavid placed, Sid the Kid took three of them: Most difficult player to play against (29.9 percent to McDavid's 23.7), most difficult forward to play against (Crosby was at 30.4 percent just ahead of McDavid at 30.1), and, overwhelmingly, in the player they'd choose on their team if they had to win just one game (Crosby had 43.7 percent, McDavid 15.3). Crosby also won best team player (16.9 percent) and was named the third-best forward in NHL history (4.9 percent) behind Wayne Gretzky and Mario Lemieux. He finished second to Gretzky in "the player you'd most want to have as a teammate."

The only category in 2017-18 that McDavid won was "player you would select to start a franchise with," at 48.6 percent. That percentage was up to 60 percent this year. McDavid has two scoring titles and is 22 years old. Crosby will be 32 in August. The math in this category is clearly in the Oilers star's favor.

But again: In the span of a year, we've gone from Sidney holding off McDavid to McDavid sweeping every category in which they both finished in the top five. Game, set, match, right? Connor's on the throne, yeah?

The Athletic held their own smaller scale players' poll this season. They asked 200 players who "the best all-around player in the NHL today" was, and a whopping 48 percent of them answered Crosby, while 25 percent said McDavid.

Again, these are their peers. Not the fans with partisan interests. Not the writers who "haven't played the game." These are the guys who play with and against Crosby and McDavid.

So what are they telling us?

Here's a theory: In 2019, it's undeniable that McDavid is an offensive force of nature. He skates better than anyone, and stick handles like a virtuoso despite those top speeds. Since 2016, no one has more points than McDavid's 315 in 234 games or his 1.35 points per game average in that span, including Crosby (271 points in 229 games for a 1.18 points per game). This season, McDavid is second to juggernaut-on-a-juggernaut Nikita Kucherov (120 points) with 107, which is 14 more than Crosby. He has 37 goals, to Crosby's 33.

Is McDavid the league's best forward? Probably. Is he the hardest player to play against? Undoubtedly.

But he can't claim the "best in the NHL" prize until he can convince more than 50 players out of 200 that's got a more complete game than Crosby. And how is he going to do that when he can't even convince his own coach?

"Sid thinks at a level, when the other team has the puck, that's above everyone else in the league. His anticipation when the other team has the puck is so high, he knows where it's going ahead of time. He can pick off passes, make you make errors ... And then he also knows where people are located on the ice, so he can turn that turnover into a scoring chance," Oilers coach Ken Hitchcock said in February. "Connor has that in him. He sniffs out danger offensively. Sid thinks it defensively -- he has both going. That's where Connor is going to get to."

And he'll get there. It's just a matter of time before McDavid ascends to the throne. But based on how the players have voted in the past two years, Sid still wears the crown as the best pound-for-pound player in the NHL. And that's a heck of an accomplishment. I mean, not as good as winning best and worst trash-talker, but still pretty good.

The Week in Gritty

Also in the NHLPA poll: 69 percent of the players were nice enough to name the Flyers' orange mop as the best mascot in the NHL. And Gritty reacted with his typical humility:

The sheer volume of angry and dispirited Ottawa Senators fans can be overwhelming, from the ones who blast the delusional tone of management's proclamations to the ones demanding that owner Eugene Melnyk sell the calamitous franchise.

Perhaps it's a defense mechanism, or perhaps he actually believes this nonsensical reaction, but Melnyk has chosen a unique way to cope with this vitriol: By claiming that it originates with fake fans.

"The key for us, first of all, is to identify who is a Senators fan and not. We tripped up one of these guys and it turned out it was some little 12-year-old in Toronto who was upset with the Senators in general," he said on Sportsnet 590 on Thursday.

Let's pause here, for two rather unbelievable admissions. First, that apparently the owner of a National Hockey League team has commissioned his employees to investigate critics and ... I don't know ... give them some sort of creepy loyalty score? Second -- and please remember this requires us to believe in the results of Melnyk's investigation -- apparently the owner of an NHL team also feels that one outlier invalidates the concerns of his paying customers, and the ones who now refuse to pay as long as he owns the team. He's like a low-rent local newscaster who finds that one weirdo on a given subject -- "But we talked to one man who hates trees" -- and builds a trend story around him.

"I'm a high-profile person that's an easy target. Let them do what they want to do. I basically ignore 99 percent of it."

"For our fans that are real fans, we're doing the best we can. All we can do is to keep doing what we've been doing. We've had a great record for the last 15 or 16 years since I bought them. We've been to the Stanley Cup Finals, we've been to the conference finals, we've had All-Star Games, we've had drafts, we've got outdoor games. We're doing everything, more than most franchises, as far as what we do for our fans."

What is this man even talking about? What owner, facing a season in the NHL's basement, having watched his team trade away its four best veteran players, including one acquired last season for a first-round pick that his team won't have in this year's lottery, having seen his team plagued by scandals ranging from the absurd (the Uber thing) to the uncomfortable (the cyberbullying thing) to the criminal (the Randy Lee thing), having watched the possibility of a downtown arena that could transform the franchise slip through his inept fingers ... what owner would then say "we're doing more than most NHL teams for our fans and hey, we gave you an All-Star Game and you dare complain about the state of the team?!"

The best thing Eugene Melnyk could say to his fans at this point is absolutely nothing. Go to your corners. Give it a rest for a while. Maybe even that 12-year-old in Toronto will calm down.

Jersey Foul of the Week

But it is actually a Russian Nesting Doll of Fouls: On top of the cross-sport indignation, you have some dude wearing a St. Louis Blues jersey to a Hurricanes vs. Sabres game. What a nightmare.

Best Player in the World of the Week

If you score the Cup-winning goal in overtime, you're probably going to be our Best Player in the World of the Week, no matter what the goal looks like. With that, here's Lee Stecklein of the Minnesota Whitecaps at 49 seconds of overtime to win the NWHL Isobel Cup:

A long-distance shot, through traffic, but a championship winner for Stecklein and the Whitecaps, in their first NWHL season. She also assisted on Amy Menke's goal in regulation, which opened the scoring against Buffalo, who lost the title game 2-1. (Please note the Beauts didn't have goaltender Shannon Szabados, who backstopped their semifinal victory but was out with a lower-body injury. Bummer.)

The Arizona Coyotes are in a tight playoff race and we bugged coach Rick Tocchet about how they're handling the pressure. We also talked playoff races and other nonsense with ESPN's Dimitri Filipovic, as well as coverage of the NHLPA player poll and the Capitals' visit to the White House. Stream here and grab on iTunes here.

USA Today decided to talk to the artist of that Donald Trump goalie mask. For the record, we messaged the folks at Tendy Gear, who tweeted the original image of the 14-year-old boy's mask, and they said: "The kid was getting death threats and has had to get the police involved. His team asked me to remove his name from it and I couldn't do that on twitter so I just deleted the post. ... I told him it would create some controversy and even waited a week before posting it to give him time to think it through but he insisted. I figured it might blow up a bit but I didn't think it would go as far as death threats." 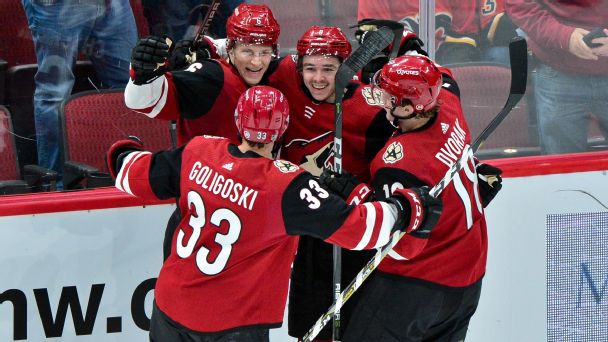 Emily Kaplan and Greg Wyshynski talk to Arizona Coyotes head coach Rick Tocchet about his team's exceptional season, as they fight for a final playoff spot (18:21). The Washington Capitals are finally going to the White House to be honored as Stanley Cup Champions (31:40). Ahead of the final stretch, ESPN+ contributor Dimitri Filipovic talks playoff runs (41:07). Plus, during 'Phil Kessel Loves Hot Dogs,' we talk March Madness, after learning that Greg is featured on a hockey-based bracket (51:08). Listen »

An alleged racial remark caused a scandal in the Hockey East tournament, but the "matter was resolved" after an investigation.

Minnesota does not want to hear that Grand Forks is the best hockey town in the U.S., no sir.

The Capitals will not have a public celebration at the White House on Monday, only behind closed doors meeting with the president. FYI: This team plays in Washington, D.C.

Interesting story on players and the cost of their sticks from Montreal.

Oilers CEO Bob Nicholson has already apologized for these comments on Tobias Rieder but that doesn't make them any less absurd.

The Worst Hockey Media bracket is the talk of Hockey Twitter, and somehow I didn't make it out of the first round.

Finally, Brad Marchand is a Troll God. Lesson: Don't go after his boys.

What kinda garabage is this haggs...you dont even watch the games you just stand at the snack bar the whole time https://t.co/8celtkGxw6 - Brad Marchand (@Bmarch63) March 21, 2019

Deep dive into whether Marie-Philip Poulin is the best women's hockey player of all time.

Check out my story on the draft lottery and how it works.