With just a few days left of the regular season, it's time to check in on who met expectations, who exceeded them and, of course, who were our biggest disappointments.

For this week's Power Rankings -- voted on, as always, by ESPN's panel of experts -- we looked at how teams fared compared to their preseason projected standings point totals from the Westgate Las Vegas SuperBook.

How we rank: The ESPN hockey editorial staff submits polls ranking teams 1-31, and those results are tabulated to the list featured here. Teams are rated through Tuesday night's games, taking into account overall record, recent success and other factors, such as injuries.

Even good teams can overachieve. Nikita Kucherov, Steven Stamkos and Brayden Point have combined for the most points (312) by a trio since the 2000-01 Penguins (Jaromir Jagr, Alex Kovalev, Martin Straka).

The Flames' goaltending didn't derail them, and their offense was far more explosive than Vegas expected, even without significant contributions from their big free-agent signing, former Golden Knight James Neal.

Boston finished right about even with expectations. Much credit must go to coach Bruce Cassidy, who had to juggle plenty of injuries, especially an oft-depleted blue line.

Perhaps Vegas was swayed by how hard the Caps partied after clinching the Cup in the Sin City, and during the summer that followed. It's not the first time -- nor will it be the last time -- someone underestimates Alex Ovechkin's resilience.

The Leafs are going to fall short, and some uninspired hockey down the stretch hasn't helped. Now that the inevitable first-round series against Boston is cemented, they better shape up fast.

ESPN On Ice with Kaplan and Wyshynski 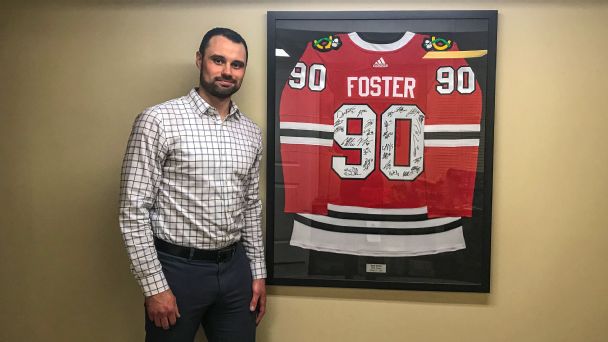 Off the top, Emily explains how she landed an interview with Scott Foster, her "white whale." Red Wings coach Jeff Blashill joins the show to talk about his contract extension, and the future in Detroit (10:07). The CWHL announced on Sunday that it would be folding; Greg and Emily talk about how this will affect women's hockey (19:46). We talk to broadcaster Leah Hextall, who became the first woman to call a Men's NCAA Division I tournament game this past weekend. Leah offers her thoughts on women in hockey, and the now-defunct CWHL (31:20). Listen »

The Islanders are going to finish as this season's biggest overachievers, and the most noticeable difference is defensive structure and goaltending. And maybe that chip on their shoulder.

The Sharks won't hit the over, and they have played some unexciting hockey since being locked into the No. 2 seed. We remain especially concerned about their goaltending in the playoffs.

No matter how many roller coasters the Penguins ride during the season, they always seem to end up here: looking dangerous when it matters, poised for another long playoff run.

Without their top two defensemen for long stretches, and thanks to a slump from sniper Patrik Laine, the Jets never fully clicked this season.

The Preds won't reach above the 105-point mark for a few reasons, although Viktor Arvidsson wasn't one of them. Arvidsson (33 goals in 56 games) almost became the franchise's first 40-goal scorer. If only he'd been healthy all season.

Imagine that: Vegas was wrong about Vegas ... again. When the Golden Misfits shocked us all last season, the bar might have been set too high for an encore, even though they still look quite good.

At first it looked as if the Blues would hit way under. (They were dead last in the NHL on Jan. 3.) Their pace over the past two-plus months would have put them way over. Instead, they finish right around where Vegas expected.

So it looked as if the oddsmakers correctly projected the Blue Jackets as a borderline playoff team. Few predicted how big the stakes would be right now for GM Jarmo Kekalainen.

The "bunch of jerks" exceeded expectations, and one of the biggest reasons is goaltending. Stepping in for Scott Darling, Petr Mrazek and Curtis McElhinney have been sensational.

The Canadiens will finish more than double digits above their projected point total. It helps that new forwards Max Domi and Tomas Tatar overperformed compared to their previous stops.

The Stars fended off some early-season drama and adjusted to yet another new coach, finishing just about at expectation level. Goaltending kept Dallas afloat when its offense (fourth worst in the league) sputtered.

Few teams have it better this season than the Avs, who slide into the playoffs with a point total in the low 90s -- and still have the highest probability of winning the Jack Hughes sweepstakes thanks to owning Ottawa's draft pick.

The Coyotes exceeded expectations and went on an improbable playoff push through March. The magic seemed to run out at the end, but what a ride it was.

The Wild are missing the playoffs, and finishing below expectations, because they couldn't score enough goals. GM Paul Fenton began shaking things up at the trade deadline, but by then it was too late. Expect that process to continue this offseason.

The Panthers might finish as low as double digits under their projected point total. You knew it was bad when the rumblings about whom they'd target in free agency began ... in February.

If the Flyers didn't have such a poor start -- and have to cycle through so many goaltenders before calling up Carter Hart -- they might have hit their mark. That's a lot of ifs, though.

Inspired performances by the stars -- Patrick Kane, Jonathan Toews and we'll now include Alex DeBrincat on that list -- kept the Hawks afloat. A leaky defense derailed them.

The Canucks hit the over, and the success can largely be pinpointed to one transcendent player: rookie Elias Pettersson, the inevitable Calder Trophy winner.

With the Oilers currently 12.5 points below the line with two games to go, you have to feel for a team that has two 100-point stars in Connor McDavid and Leon Draisaitl ... and a whole lot of uncertainty surrounding them.

The Ducks became cellar dwellers this season, finishing well below their line, because their defense was porous (and they are getting old, and slow, and John Gibson can shoulder only so much).

This is exactly how the Blueshirts were supposed to finish. They look like a team that has fully embarked on the rebuild and is eager to use five draft picks over the first two rounds in June.

Because "the team is being taken over by the young people" (those are GM Ken Holland's words), the Red Wings are going to go through some growing pains. Such as finishing with fewer than 80 points, as expected.

Remember the 10-game winning streak that catapulted the Sabres to first place on Nov. 27? Since then, the Sabres have only 14 wins. Even the Senators have more (18)!

The Devils were bound to regress, but this was a steep decline. If you have any doubts that Taylor Hall should have won MVP last season, this 20-point drop (as Hall missed a large chunk of the season) should quash them.

Things got out of hand quickly for the Kings, and the relationship with last year's prized free agent Ilya Kovalchuk already needs to be repaired. Los Angeles could finish more than 20 points below expectations.

Clinching last place in the NHL, the marathon season of gloom -- doesn't Uber-gate feel like years ago? -- finished even bleaker than anyone could have predicted.