So the 2018-19 season just ended? We know everyone else is already looking ahead, so we joined in.

For this way-too-early edition of the 2019-20 NHL Power Rankings, we also identified what a successful season would look like for each of the 31 teams.

How we rank: The ESPN hockey editorial staff submits polls ranking teams 1-31, and those results are tabulated to the list featured here. For this edition, we're projecting how we think the teams will be rated heading into next season, taking into account recent success and other factors, such as who could be leaving via free agency. The "previous ranking" for each team refers to the club's spot in our final pre-playoff rankings.

How will the Lightning measure success in 2019-20? By getting over the playoff hump. It's Stanley Cup or bust here. 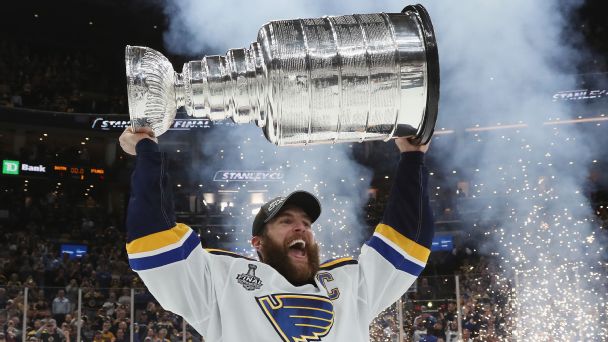 Maintaining excellence after a Stanley Cup Final run is never easy. But that's the bar Boston has set for itself.

The Flames were so awesome during the regular season, and so forgettable in the playoffs. Success next season is all about sustainability.

With a summer of extended rest, the Caps should be back among the top Cup contenders in 2019-20. They shouldn't have trouble making the payoffs, but they need to avoid another early exit.

All eyes right now are on the Mitch Marner negotiations, but a win for the Leafs in 2019-20 is a long playoff run.

The Blues should be contenders yet again. So next season, the goal is to try not to make it so hard on themselves early.

A surprise playoff team in 2018-19, the Islanders should be happy to replicate that next season; it still means they would be ahead of schedule.

The Sharks are still searching for that elusive first Stanley Cup. With so many roster questions this summer (especially Erik Karlsson), the team might look a bit different on opening night.

It appears Penguins GM Jim Rutherford wants to once again reinvigorate his group by making a few trades. Success next season is contingent on how effective those moves are.

With a fascinating offseason ahead -- and plenty of difficult contract decisions and negotiations to navigate -- a win for the Jets is if they can stay afloat amid all the uncertainty.

The Golden Knights suddenly find themselves strapped by the cap. They need to shed some money to stay flexible, and maybe that means ridding themselves of the David Clarkson contract.

Miss a game from the 2019 Stanley Cup playoffs? Want to experience a game again? Every playoff matchup is available for replay on ESPN+. Watch now »

The Predators might have plateaued with this group, and need a roster shake-up if they are going to spark another long playoff run.

If Mats Zuccarello decides to stay, the Stars are starting the offseason on a good foot. They'll be successful if they show more consistency.

The Avs are no longer the plucky young team that arrived ahead of schedule. Next season is a success if they match expectations, which is not just making the playoffs, but going on a run.

After clearing many bars last season -- both on and off the ice -- the Canes have the unenviable task of raising them yet again.

The Blues Jackets don't want to be graded on a curve. Success this summer is if they can lure some free agents, as they probably say goodbye to two big ones in Artemi Panarin and Sergei Bobrovsky.

The Canadiens' power play can't be as dreadful as it was last season. They also should be looking at a playoff spot next spring.

In the Joel Quenneville era, the Panthers should graduate on from being everyone's favorite sleeper team. It will help if they get Bobrovsky and/or Panarin.

With a new coach and new GM calling the shots, the Flyers should push for a playoff spot next season, especially if they're as active in free agency as we're predicting.

The Coyotes were the plucky underdogs who almost sneaked into the playoffs last spring. If they can lure any big names (Phil Kessel? Big-time UFAs?), next season could include a long-awaited return to the postseason.

A win next season for the Minnesota Wild? Trades that aren't instantly regrettable. It has been a shaky go for first-time GM Paul Fenton, but he's still working to put his stamp on the roster.

Chicago is trying to pull off what Boston somehow finagled: rebuilding on the fly to squeeze a few more runs out of a veteran core.

In Edmonton, the bar is low but the ceiling is high. New coach Dave Tippett has to make the most of his roster outside Connor McDavid and Leon Draisaitl.

The Canucks need to acquire depth (while avoiding bad contracts) to complement their budding young stars. Easier said than done.

With the No. 2 draft pick and the temptation to dip into high-priced free agency this summer, the Rangers might be contenders again sooner than we thought.

Still on the lookout for a new coach, the team will find success if it continues transitioning younger; that might mean goodbyes to some longtime Ducks.

Under new GM Steve Yzerman, there are now high expectations for an expedited rebuild in Detroit. First, Yzerman needs to shed a few bloated contracts.

It can't get worse than it was last season. The Kings need to get more out of -- and find a way to work with -- Ilya Kovalchuk, for starters. He's under contract through 2021.

New coach Ralph Krueger is tasked with changing the culture in Buffalo, and it's encouraging that Jeff Skinner re-signed for eight more years. Making the playoffs in Krueger's first season might be a stretch, though.

Yes, New Jersey has the No. 1 pick in the draft. But if the Devils can't convince Taylor Hall to stick around, their short-term trajectory could come to a screeching halt.

The Senators can feel good about themselves if they show improvements under new coach D.J. Smith, but even better if they can avoid drama.