Welcome to the NHL Player Confidential. We canvassed the league, asking 50 players some pressing questions about the hot-button issues in their sport. Ever wonder what club has the worst visiting locker room? What road cities players dread the most? (Spoiler alert: The Winnipeg office of tourism will not be tweeting this story out.) How about recreational drug use, burner Twitter accounts, playing in Seattle and that big, fuzzy, orange mascot in Philadelphia? Our panel of pros got in their share of cross-checks.

Note: The illustrations are representations of the answers we received, as all players provided answers on the condition of anonymity.

1. Which team has the worst visiting locker room?

"Washington's showers are so bad. They're like a prison shower. There's a pole in the middle, then just spews that come out of that one pole. Not that I care if someone is showering next to me, but it's just a really weird setup."

"Boston is brutal. You're right there next to the rink. It's cold. You're not comfortable. If you feel comfortable, you're going to play well, so that's probably why they do it. It's a competitive advantage for them."

"I'm not a fan of the old Coliseum in Long Island. It's too long of a walk from the locker room to the ice. I hate making that walk."

"Carolina isn't great. It could definitely use an update."

2. Which team has the best visiting locker room?

"Edmonton is like a penthouse. There's so much space."

"The visiting locker room is the best thing about going to Edmonton."

"Detroit's visiting room is super nice. But it's not my favorite. Because in Detroit, you walk out and they have this restaurant there for fans right before the entrance to the ice. I usually go out first and like to stand there for a minute or two. But all these fans are knocking on the glass. It's pretty annoying."

3. Would you play for Seattle in Year 1?

"The success of Vegas has definitely opened guys' minds up to it a little more. I'd probably like playing there, but I wouldn't want my team to give me up."

"The travel would probably suck, but other than that it would be sick."

"I think it would be a lot of fun. It's a great city, and it seems like they're putting a lot of money into that rink, so it's going to be cool. And it worked out last time with Vegas, so why not?"

"Personally, it's just too far for me. I need to play on the East Coast."

"I love my current situation and wouldn't want to play anywhere else."

"I've never been to Seattle, but I know guys who have played junior there. They all say really great things."

4. Would you feel comfortable appearing in a national ad campaign for, say, Nike or Gatorade -- or do you feel that would be too much of a distraction to your team?

"I wouldn't do it. I probably fall on the wrong side of that debate -- which is probably outdated or unpopular -- but I wouldn't want to do it. I don't really want to put myself out there like that."

"It would be fun, for sure. But if my face was on TV all the time, I'm sure I'd get chirped all the time by the guys."

"I think the right guys should do it. We need to have the elite superstars more out there. They also need to start wearing something other than suits, switch up their style. Not to the extent of NBA style. They should wear suits, but not suits and ties, or suits and dress shoes. Maybe nice white shoes or sneakers. I know this isn't what you asked, it's just something I talk about a lot. I think that would be really good for our sport."

"I wouldn't mind it. I think it's fun when big companies like that have interest in hockey players and come get you. I like that."

"I like being able to fly under the radar. So that's probably a no for me."

5. The NHL doesn't punish for recreational drugs. Is that good or bad?

"I think it's both. If you're talking about marijuana and cocaine ... one of those drugs is probably beneficial, the other one is not. So maybe [the policy] needs to be redefined."

"If it's not performance enhancing and it doesn't give you an edge, then whatever."

"If you're a pro athlete, you should know what's good for you. Marijuana -- we all grew up [hearing that] it was so bad for you. And now it's legal. Our kids are going to grow up [thinking] it's just normal. It's like beer is for us. But cocaine? I don't think there is any room for that."

"I think it's good. In the other sports, you see guys getting suspended for weed. It's their body. I'd rather have that than opioids, right?"

"I don't think it's a problem. We're all professional athletes. We take care of our bodies and know what to do."

6. Given the league's approach to recreational drug use, does the NHL have a cocaine problem?

"Has anyone said yes to this question? I really don't think there is one, so I'd be shocked if someone said yes."

"You hear stories of it, and they're kind of shocking. Maybe in the summer guys get into it. And maybe 10, 20 years ago you would see it more often and it was around the team more often. But I've never really been on a team where guys are doing it all the time. I've actually never seen guys do it during the season or anything like that."

"I don't think there is a problem compared to the problem outside the NHL. It's probably the same. I'd guess some people would use it to party, I'd assume, but what is a problem? How would you define 'problem'?"

"Honestly, I've been lucky because I've never been on teams where it is there. I have heard of some teams, though, where they're going to go party and they have a day off the next day. And they will have some."

"No. I think the majority of players are way too conscious of what we put into our bodies these days. Guys don't even drink that much anymore. You'll have a glass or two of wine at dinner or a beer on the plane. As far as harder drugs, I definitely don't think most guys get into that."

7. Which road city do you dread the most?

"Winnipeg. It's always cold. Tough rink to play in. It's just dirty -- you walk around the city and feel like you need to wash your face after you go outside. So nothing about it is very exciting."

"Winnipeg is just depressing. You don't even want to leave the hotel to get a cup of coffee."

"I'm sure a lot of people said Winnipeg, but I always like Winnipeg. There's stuff to do there. We're close to the casino, if you want to go for a half hour or whatever. Wherever you go, they always have TSN on. I can't get that here [on my U.S.-based team]."

"Carolina. The arena is far out. It's in the middle of nowhere. There's never anything going on. There's nice golf, but it's not like you have time to go play a round. You usually end up spending your whole time there in your hotel."

"Buffalo is brutal. I don't think anyone looks forward to going to Buffalo."

"Buffalo always feels cold and dark. I have an eight-team no-trade list, and that's one of my cities on it."

"Did a lot of guys say Buffalo? I actually like Buffalo. I get an unreal steak there every time. You really only need one good restaurant, and there's a great steakhouse there we always go to."

"Buffalo never bothered me because I played for [Atlantic Division team] and we were always in and out. I also found a decent little restaurant downtown, and that's all I need. You only need to eat out once. The hotel is clean. Although one time I almost got stuck in a jump setup [in Buffalo], on the street walking home from dinner. A guy asked me for my phone. He just said, 'I need to call.' He didn't even say call someone, just 'I need to make a call.' I said no. My two teammates were 40 yards away. I was like, 'Boys, thanks for nothing. I'm on own.'"

"I feel like we always play Edmonton in the middle of winter and it sucks."

"I'll say Columbus. Mostly because I can't think of any other answer, and I really can't remember any memorable experiences there."

8. Do you have Gritty fatigue?

"I think it's perfect right now. Ask me in another year and I may have another answer."

"I'm surprised there's not more of that in the league. It's pretty well done. It's super on-brand for what they represent and how they orchestrate their image."

True Gritty: Everything you wanted to know about Philly's furry mascot 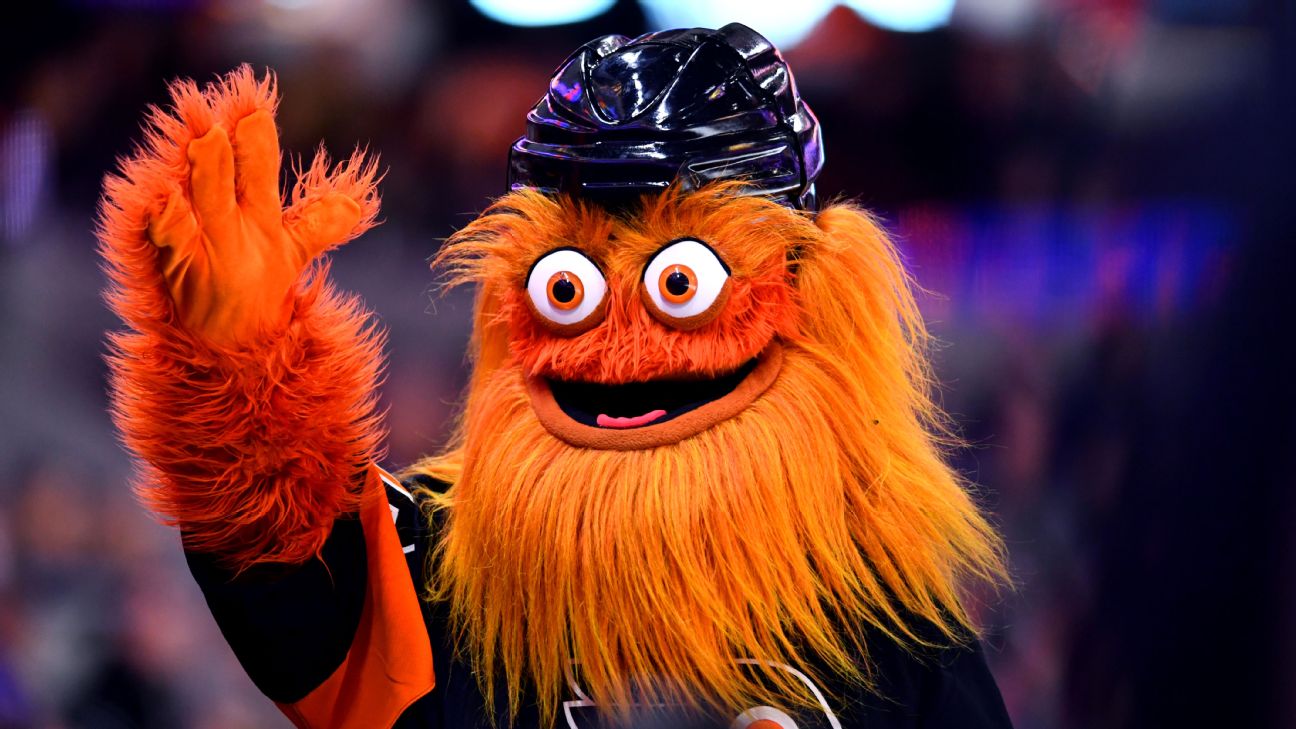 "I think it's hilarious. Anything that helps the NHL promote itself -- and people love Gritty, he's everywhere -- is a good thing."

"He's hilarious to me. Did you see what he did the other night, trolling P.K. Subban with the sign that said, 'Lindsey Vonn could do better'? That was so funny. I was dying when I saw that."

"Yes. It's too much. He's everywhere. I feel kind of bad for the other teams' mascots. It's like everyone forgot about them."

"I'm surprised he's still getting so much attention, to be honest. I thought it would wear out by now. I guess I don't really mind him -- he's, like, not affecting me -- it's just a lot."

"I guess you could call it a burner Twitter account, but I'm not using it like Kevin Durant or anything like that. I don't have any followers. I don't even know if I follow more than 20 people. I usually just search things. I really just use it to follow golf. That's how I get results of golf tournaments."

"I have one, but just to keep up on news and follow the media guys in our market. See what they're saying about me. I would never respond to them, though."

"No, I'm not a big social media guy. Honestly, I wouldn't trust myself to not post or accidentally like something. You see athletes in other sports get in trouble for just liking posts. It's crazy to me."