To cap off our Hockey Week in America celebration and lead into the weekend's 40th anniversary of Team USA's Miracle on Ice, we gathered our NHL team to answer some questions about the state of United States hockey. We're exploring:

Aside from the 1980 Miracle on Ice, what is the best moment in U.S. hockey history?

Greg Wyshynski, senior NHL writer: The U.S. women's national team winning gold in the 2018 Winter Olympics in a shootout against Canada. The Monique Lamoureux-Morando tying goal in the third. The Jocelyne Lamoureux-Davidson shootout winner. Maddie Rooney's incredible goaltending. Finally overcoming their archrival after heartbreak in Vancouver and Sochi. And doing so after their battle for equality against USA Hockey, in which they made the case that their success mandated the same levels of support the men's team received. It was all just absolutely inspiring, in every way.

Emily Kaplan, national NHL reporter: Team USA winning the inaugural Olympic women's hockey gold medal in 1998, upsetting the Canadians. That team inspired the next generation of hockey stars in this country -- Hilary Knight, Kendall Coyne Schofield et al -- and set a new standard for the American program. Consider this: The entire team was inducted into the U.S. Hockey Hall of Fame.

Chris Peters, hockey prospects analyst: I agree with Emily on that '98 team, and I also think the 1960 Olympic men's team deserves a shoutout for its win in Squaw Valley 60 years ago. That said, for a child of the 1990s, the 1996 World Cup of Hockey -- still the only U.S. victory in a best-on-best tournament -- was a touchstone moment in American hockey. Beating Canada twice in Montreal to win the tournament was the biggest statement of arrival the U.S. could have made. And the American presence in the NHL has grown dramatically since that tournament.

Dimitri Filipovic, hockey analytics writer: The fact that the Americans lost in both the semifinal and bronze-medal games without scoring a single goal takes some of the shine off the accomplishment, but I still fondly remember T.J. Oshie's shootout heroics in Sochi like it was yesterday. Scoring four out of six times is one thing, but doing it against the reigning Vezina Trophy winner on his home turf made for great theater.

Who is the most underrated American hockey player ever?

Wyshynski: Tim Thomas. I know it's hard to call a guy with two Vezina Trophies and a Conn Smythe underrated, but I don't think there's enough appreciation for his run from 2007 to 2012 as one of the greatest for any NHL goalie in history, and especially one who was already 33 years old at the start of the run. He was on the plus side of goals saved above average in each of those seasons, including a bonkers 45.77 GSAA in the Bruins' championship season of 2010-11. He had a .933 save percentage and a 2.07 goals-against average in 50 playoff games for Boston.

Kaplan: Pat LaFontaine. Easy. No American player, active or retired, averaged more points per game than LaFontaine's 1.17. He was a playmaker who could do it all, but we'll always wonder how productive he could have been if not for injuries. He was limited to 22 or fewer games three times over his last five seasons, and his career was cut short at age 33 because of concussions.

Peters: Phil Housley. Yes, he's in the Hockey Hall of Fame, but it isn't all that well known that he's fourth all time among defensemen in NHL history with 1,232 points. Housley retired as the top American-born scorer in NHL history before Mike Modano passed him years later. He never won a Norris Trophy because he played in the same era as Ray Bourque, Paul Coffey and Al MacInnis, but he finished top five in voting four times. Housley entered the NHL directly from high school, put up 66 points as an 18-year-old rookie and had 31 goals the following season at 19.

Filipovic: Phil Kessel. He's at the very least going to end his career with 400-plus goals, 1,000-plus points and two Stanley Cup rings (one of which he very easily could've taken home the Conn Smythe for, too). Not bad for a player who beat cancer, got traded three times and was the brunt of many jokes just because he had a different personality and didn't look like a typical peak athlete.

Who is the next American to win the Hart Trophy?

Wyshynski: Jack Eichel. The minute the Sabres get into a wild card, the hockey community will throw a pity party for the Buffalo star and find a way to get the Hart Trophy into his silky mitts.

Kaplan: My head says Auston Matthews, but my heart says Eichel. I know things aren't looking rosy for the Sabres right now, but in the next two to three years, I see Eichel literally dragging his team into the playoffs, which will earn him the trophy.

Peters: I think the Maple Leafs are better positioned for near-term success than the Sabres, so that leads me to Matthews. Both he and Eichel have improved both their goals-per-game and points-per-game averages in each of their NHL seasons. They'll both be chasing Connor McDavid for most of their careers, but I think Matthews lands it at some point. Goals are kind of important, and he scores a bunch of them.

Filipovic: Matthews. He should already be in the discussion for what he has accomplished this season, and that's with his former coach having actively held him back for the first 25 games of the season. Now that he's being properly used, the sky's the limit for him as both a goal scorer and the best player on a team that's a good bet to remain competitive for years to come.

Are there any current players who will eventually pass Cammi Granato as the greatest American women's player of all time?

Wyshynski: Current? No. But the thing about Granato is that she inspired so many of the current USWNT players to pick up a stick -- like Hilary Knight, who picked her number to honor Granato. And those players will in turn influence subsequent generations to do the same. All of those dominoes will fall until some brilliant young player -- maybe even from a nontraditional market -- eventually surpasses the American G.O.A.T.

Kaplan: I'm not sure Kendall Coyne Schofield will surpass Granato in individual production. (In 54 career international games, Granato had 54 goals and 42 assists for 96 points.) But between becoming the first woman to participate in the NHL skills competition to emerging as a leader with the Professional Women's Hockey Players Association in its fight for a sustainable pro league, I think Coyne Schofield could become the highest-impact American women's player of all time.

Peters: Granato was a transcendent figure for the women's game, and winning gold in 1998 is a hard moment to beat. Only one woman can ever say she was captain of the first gold-medal team for women's hockey at the Olympics. It's hard for me to say she'll be topped, but she will, and it'll probably be soon. Younger players like goalie Maddie Rooney, who won at the Olympics in 2018 and is still finishing up college, or defender Megan Keller have a chance to reap the benefits of battles waged for league stability and better benefits by the veterans, and more time to grow into it.

Filipovic: I don't know how much longer she'll play to add more to her résumé, but what Knight has already accomplished as part of this golden generation of American women's hockey is awfully impressive. She has won at every level she has played, including three national championships in the NCAA, seven world championships, Olympic gold, the Clarkson Cup in the CWHL and the Isobel Cup in the NWHL. There's very little left for her to conquer at this point.

What country would have won a hypothetical 2020 World Cup of Hockey?

Wyshynski: The Americans, all day. We've been waiting decades for the moment when it all comes together. Centers like Matthews and Eichel. Wingers like Patrick Kane and Matthew Tkachuk. A defense that would include John Carlson, Seth Jones and likely Quinn Hughes. And either Connor Hellebuyck, Ben Bishop or John Gibson in goal. Yes, Canada would have been loaded, but the Americans would be the ones hoisting the giant paperweight in the end ... provided Team USA's executives iced a lineup that was talent-driven and not "grind one out against Canada"-driven. 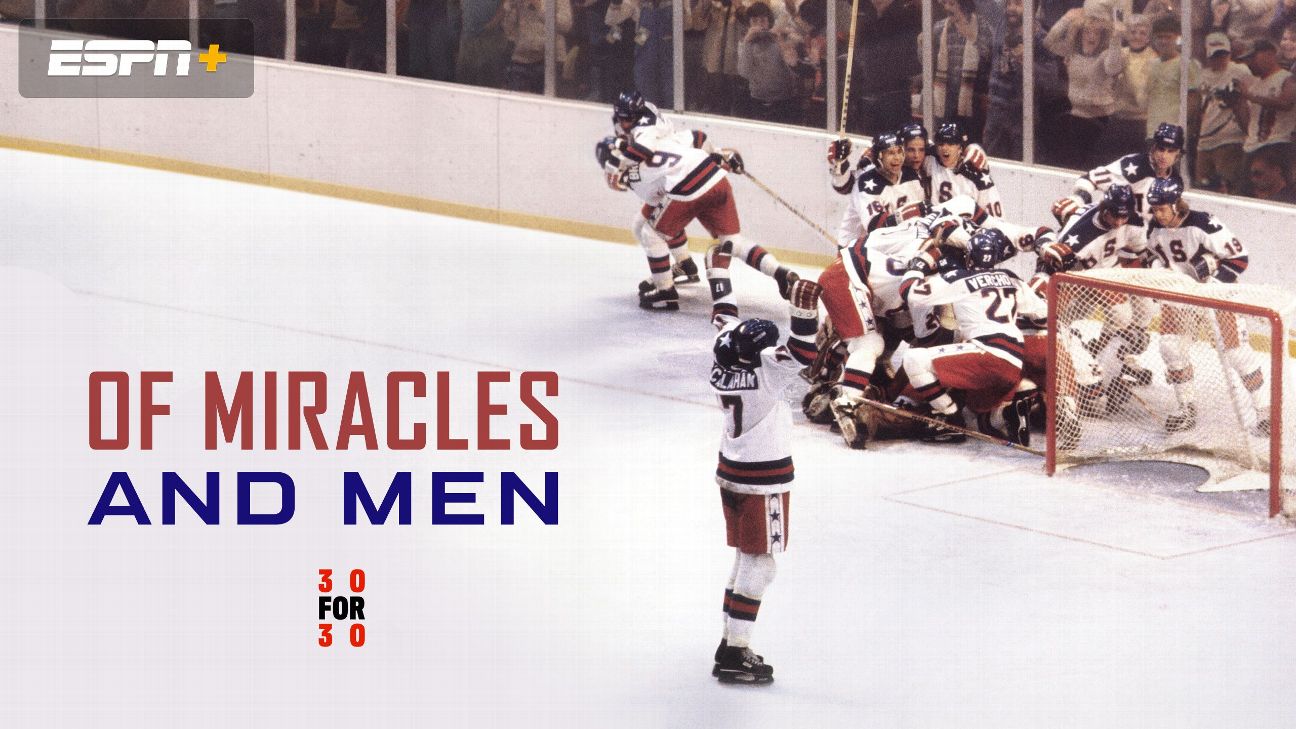 Explore the scope of the "Miracle on Ice" through the Soviet lens. With an intense focus on the game itself, the film gives a fresh perspective to the journey of a stunned Soviet team. Watch on ESPN+

Kaplan: As much as I stan for Team USA, Canada's roster would be hard to beat. I mean, imagine assigning a top six with a talent pool that includes McDavid, Sidney Crosby, Nathan MacKinnon, Brad Marchand, Mark Scheifele, Patrice Bergeron, John Tavares and Mitch Marner. Ryan O'Reilly and Jonathan Toews might be considered fourth-line grinders on this team.

Peters: I'm here for chaos, so let's consider Russia. Its defense would be severely lacking, but it'd have among the best goalie depth of any country right now with Andrei Vasilevskiy probably getting the nod. And how much do you think it burns Alex Ovechkin that his countrymen won Olympic gold without him in 2018? You've got the KHL players you can filter in, but Artemi Panarin, Nikita Kucherov, Evgeni Malkin and Evgeni Kuznetsov dominate the offense. But chaos aside, the real answer? Canada.

Filipovic: It has to be Canada. Crosby is arguably Team Canada's third-best center. You could put all of us in the wing positions, and it wouldn't matter. (That's basically what the Penguins have to do with all of their injuries this season anyway, and it's worked out just fine for them.)