"We all saw it. There are lines that can't be crossed in this game. There's just zero respect for the game in general. You got one of the star players in this league now that could have gotten seriously, seriously hurt in that incident," said Quinn following the Rangers' 6-3 loss to the Capitals. "You all saw what happened, and it happens time and time again with him. Totally unnecessary."

In the second period, Rangers forward Pavel Buchnevich had a scoring chance on the doorstep of Capitals goalie Vitek Vanecek. While battling for the puck, Buchnevich fell stomach first to the ice and Wilson delivered a punch to the back of the back of his head.

Wilson was pulled off Buchnevich by Rangers center Ryan Strome, sparking a scrum. Panarin jumped on Wilson's back in an effort to stop him from punching Strome. Wilson and Panarin peeled away, and Wilson eventually pulled off Panarin's helmet as he pulled him down to the ice with force. Panarin attempted to get up, and Wilson pushed him back down again. 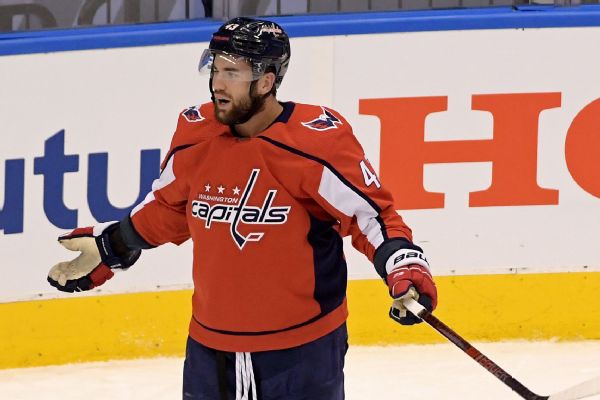 Panarin served a two-minute penalty for roughing, then left the game and didn't return due to a lower body injury. Wilson was given a double-minor penalty for roughing and a 10-minute misconduct, enabling him to finish the game for the Capitals. He scored his 13th goal of the season to cap the scoring in the third period of Washington's 6-3 win.

Quinn said after the game that Panarin was "OK" but that losing him for the rest of the game "was a big blow for us."

Wilson is a lightning rod for controversy because of his lengthy history of run-ins with the NHL Department of Player Safety, including earlier this season. Wilson was suspended for seven games in March for a hit that injured Boston Bruins defenseman Brandon Carlo.

It was the fifth suspension of Wilson's NHL career, the previous four coming in a 105-game span from 2017 to 2018. That included a 20-game suspension for an illegal check to the head of Oskar Sundqvist of the St. Louis Blues on Oct. 3, 2018, which was reduced to 14 games on an NHLPA appeal.

When asked what could be done to curb Wilson's antics, Quinn said, "The league's been dealing with this for a while. That's an answer for somebody else."

Capitals coach Peter Laviolette didn't think there was anything out of the ordinary during the second-period incident. "I thought it was just a scrum. Physical play. There was something going on originally with the goalie and jamming at the goalie. We had a bunch of players jump in there. It happens a lot," he said.

Washington's official Twitter account published a tweet after the game that said "Capitals chooses (sic) violence" that indicated Wilson was living "rent free" in the heads of critics. The tweet has since been deleted.