Colorado Avalanche center Nazem Kadri has been suspended for eight playoff games for a "high, forceful check" to the head of St. Louis Blues defenseman Justin Faulk on Wednesday night.

The NHL called Kadri, who served the first game of his suspension on Friday night, "a player with a substantial disciplinary record," as this is the sixth suspension of his career -- three of them coming in the playoffs.

Since the suspension is for more than five games, Kadri does have the right to appeal under the CBA -- first to commissioner Gary Bettman, and then to a neutral arbitrator.

In the third period of Game 2 on Wednesday night in Denver, Faulk released a shot on the Avalanche goal from the slot area. Kadri cut across in front of Faulk for a hit and appeared to make primary contact with the defenseman's head.

The referees reviewed the play and assessed a five-minute major penalty and a match penalty for an illegal check to the head. Faulk did not return to the game. St. Louis players called for Kadri to be suspended after the 6-3 loss, which put them down 2-0 in the series.

"The guy can't control himself," said Blues center Brayden Schenn. "In the playoffs, he's a repeat offender. Bad hits. Greasy hits. He had a guy in a vulnerable position and he picked nothing but the head."

Kadri had an "in-person hearing" conducted over Zoom on Friday, an indication the suspension would be more than five games. The NHL said it considered the head contact avoidable, and that Kadri elevated his shoulder into the hit to make contact with Faulk's head. 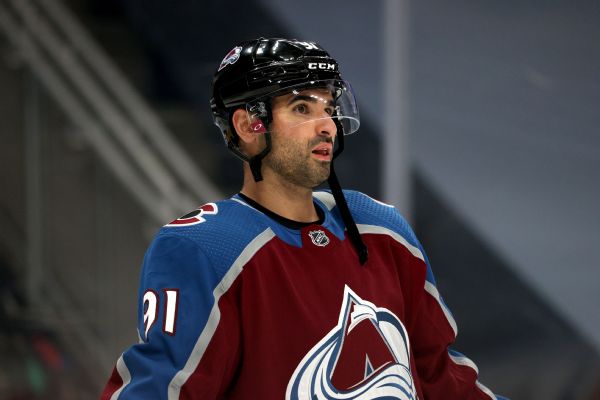 "While we accept Kadri's argument that he was trying to deliver a full body check, the head was the main point of contact on this hit," the NHL Department of Player Safety said in its ruling.

In determining the length of suspension, the NHL took his prior history into account. While Kadri isn't a "repeat offender" according to the collective bargaining agreement -- his last suspension was more than 18 months ago -- the NHL is permitted to more severely punish players "who repeatedly violate league playing rules."

Combining his regular-season and playoff totals, Kadri has played in 704 games and was suspended five times and fined three times before this ruling.

Following his second straight suspension in the postseason, the Leafs traded Kadri to the Avalanche in July 2019.

The Blues were without both Faulk and defenseman Robert Bortuzzo for Friday night's Game 3 in St. Louis. Bortuzzo left Game 2 in the second period after appearing to take an elbow from Colorado forward Tyson Jost. There was no supplemental discipline hearing for Jost despite what Schenn called "a pretty gross elbow."