Ah, the NHL All-Star Skills Competition, that incomparable showcase of breathtaking hockey talent, where reputations are built and legends are made.

And where better to bring the event back to life after last season's COVID-19 layoff than the gaudy, glamorous Las Vegas Strip?

Hockey in the desert is very happening. Just ask Auston Matthews -- he'll be there! 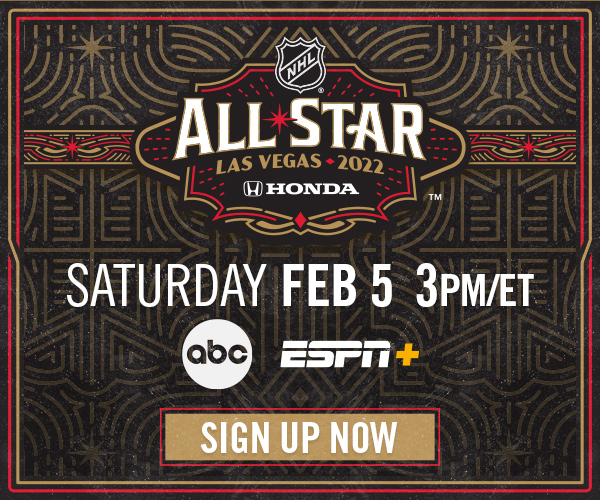 The skills competition has long been appointment viewing for hockey fans, a once-a-year chance to see their favorite players going toe-to-toe against other greats from around the league. But if you're newer to the program (or just need a refresher on what's to come), we're here to help.

The NHL staged its first skills competition in 1990, ahead of the 41st All-Star Game in Pittsburgh. It's been a staple for the league ever since, and over the years different contests have been introduced to challenge participants.

In 2022, the NHL is leaning into its setting by introducing two Vegas-themed events. Those will be part of the festivities along with five games used in past skills competitions. The winner of each contest wins a $30,000 prize.

All the fun gets underway Friday, Feb. 4 at 7:30 p.m. ET on ESPN. To get you ready, here is a breakdown of the seven events.

This competition will literally happen on the Fountains of Bellagio. The eight participants will travel by boat to a "rink" set up in the fountain, where they'll shoot five pucks as quickly as possible at five targets.

Qualifying players will advance to the final, where a breeze of fountain spray is set to swirl and make things extra difficult for the competitors.

Added bonus: This event will feature three-time Olympic medalist Jocelyne Lamoureux-Davidson as one of the shooters.

The favorite: In this first-ever event, bet on second-time All-Star Huberdeau to flex his muscle.

From the Fountains to the Strip! Because who wouldn't want to play street hockey on Las Vegas Boulevard, especially when there's a blackjack theme?

Five participants will face a full deck of oversized cards set up in a rack formation. The shooters' objective, just like on the blackjack tables, will be to reach 21 without going over -- and do it in the fewest number of shots. Each round is won by the first player to nail 21, or whoever has the highest hand. The first player to win two rounds takes the pot.

The favorite: Count on Kadri and Matthews to have the inside track here -- and bet on Matthews to hit the jackpot.

A classic. Eight players will take one -- and only one -- timed lap around T-Mobile Arena, and each participant can choose what direction to skate in. From a standing start that's no more than three feet behind the designated line, skaters take off on the ref's whistle. Fastest time wins.

The last winner of this event was New York Islanders forward Mathew Barzal, who was not selected to All-Star weekend this time around. So a new champion will be crowned. Past winners in this year's field are Connor McDavid (a three-peater from 2017-19) and Dylan Larkin (2016).

The favorite: This will be McDavid's event to lose (see credentials above). But if anyone can top the Oilers' captain, our money is on Larkin or Connor.

Here's where we get everyone involved. Four goalies vs. 36 players. Who comes out on top?

Each netminder will face every shooter from an opposing division. Players will fire on net in numerical order -- lowest to highest -- with the division captain going last. If the goalie saves the captain's shot, then he continues to face pucks until a goal is scored (the round must end on a goal, not a save).

The goalie who produces the longest streak of saves wins. If there's a tie in streak length, the winner will be decided by number of saves made. And if still another tiebreaker is needed, we get sudden-death "goalie goals," which sounds rather entertaining.

The favorite: Well, this group is almost certain to contain all three finalists for the Vezina Trophy this year, but Vasilevskiy still has the inside track. Keep an eye on Campbell, though.

This one brings the heat. We're talking 100 mph fire.

At least four players will line up along the nearest blue line, behind a puck situated 30 feet from the center of the goal. Competitors skate ahead and give the vulcanized rubber the biggest whack it's ever felt, while a radar gun tracks its progress. Each player gets two attempts, and shots must be on goal to count.

If a player breaks his stick on a shot, he gets another crack at it. Whoever has the highest mark on the radar gun wins.

The favorite: In his All-Star weekend debut, Pelech could definitely run away with this title. Wilson, also a first-timer and a big-bodied forward, is a sleeper pick.

It's baaaack! The skills competition hasn't included the breakaway challenge since 2016, and the NHL is going all out with its return as a "trick shot" competition.

Anaheim Ducks rookie phenom Trevor Zegras wasn't selected to All-Star weekend, but the league is making him a special guest for this event. And he's not the only one.

This season will include 103 exclusive regular-season games across ESPN, ESPN+, Hulu and ABC. More than 1,000 out-of-market games will be available to ESPN+ subscribers.
• How to watch
• Subscribe to ESPN+
• Stream the NHL on ESPN

Rhéaume was the first woman to play in the NHL when she suited up for two preseason contests with Tampa Bay in 1992. She also is an Olympic silver medalist from the 1998 Games.

Russell, the son of actor Kurt Russell and actress Goldie Hawn, appeared in net for several minor league squads over the years, including the Chicago Steel.

This game requires a minimum of four players and two goalies. Shooters can start from anywhere in the neutral zone and move throughout the offensive zone, including behind the net (hence the inclusion of Zegras, master of "The Michigan").

Each skater gets two shot attempts, which will be judged by a panel on a scale of 1-10. The shooter with the highest score after two rounds wins.

The favorite: As if Zegras wouldn't be the guy here. Pure talent, and a little chip on the shoulder for not being selected as an All-Star to begin with.

If any event can truly rattle a guy, it's probably this one.

There will be two players from each division included, with four passers. Four Styrofoam targets will be attached to the corners of a net.

One shooter will stand 25 feet from the goal line; another shooter does the same at the other end of the ice. Two passers will flank each shooter, and alternate sending pucks into the line of fire. The shooters will attempt to hit all four targets as quickly as they can. Whoever gets them all the fastest wins.

Lamoureux-Davidson will be part of this event too, acting as one of the passers.

Fun fact: No one on this season's All-Star rosters has ever won the accuracy shooting challenge. Carolina's Jaccob Slavin is the reigning champ from 2020.

The favorite: Some players wither under the pressure of accuracy shooting challenges. Draisaitl won't be one of them.