There's a famous story about Brad Marchand's exit meetings in Boston after his rookie season.

Throughout Marchand's draft process and early in his pro hockey career, he was often reminded of what he couldn't achieve. NHL teams believed he was too small (a 5-foot-9 forward was especially undersized as he was breaking in). Scouts said Marchand's skating wasn't good enough. NHL evaluators believed discipline was an issue. He was told his skill set probably didn't have a high ceiling.

Marchand, a third-round pick in 2006, got called up to the NHL for a 20-game stint in 2010. "After the year I met with Peter Chiarelli, then the GM, and he said, 'Look, you got a taste of it, you got to play some games, be around the playoffs, see what the NHL is like,'" Marchand recalls. "He said, 'Next year, if you can come in and be a good energy player, play on the fourth line, maybe get 10 goals, I think that would be a great year for you.'"

Bruins at Penguins on ESPN/ESPN+ 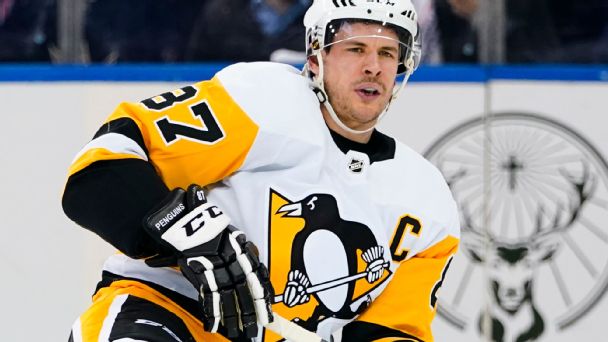 Watch the red-hot Boston Bruins take on the Pittsburgh Penguins on ESPN/ESPN+ (8 p.m. ET). There will also be a Star Watch alternate broadcast presentation on ESPN+, which will feature coverage of Sidney Crosby and Brad Marchand with isolated cameras and statistics.
• How to watch
• Subscribe to ESPN+
• Stream the NHL on ESPN

Marchand, who was 21 at the time, didn't like that outlook. The winger's response: "I think I could get 20 goals in this league."

"[Chiarelli] kind of looked at me and laughed," Marchand said. "I hadn't scored a goal in the league at that point. I had one assist in 20 games. I hadn't done much. I think it took him by surprise."

There's one thing you should know about Brad Marchand: Set limitations, and it fuels him with determination. He's often bucking other people's expectations for him.

Just look at the latest example: He defied doctors and returned more than a month ahead of schedule following double hip surgery, scoring two goals and adding an assist in his first game back this past Thursday.

MARCHAND SCORED 21 GOALS during his sophomore season -- and his career has since taken off to heights that perhaps only he imagined. At 34, he is one of the league's premiere superstars. He's still pesky -- few hound pucks like Marchand does, and he still lives up to his nickname as the "Little Ball of Hate" -- but no player in the NHL plays with that edge and consistently puts up his production.

Since that 2010 exit meeting, only Alex Ovechkin, Steven Stamkos, John Tavares and Patrick Kane have scored more goals than Marchand's 353.

This past offseason, Marchand hit a crossroads. The Bruins were eliminated in the first round of the playoffs by the Carolina Hurricanes in seven games. Fans wondered if Boston's core was aging out and another Stanley Cup window had closed.

Marchand battled lower body injuries the past several seasons. Despite a groin procedure, and a sports hernia surgery, issues kept flaring up.

Marchand was presented a choice by the Bruins' medical team: He could get hip surgery, or continue trying to play through it, and try to strengthen his body that way.

"They said, 'We think you should do the surgery, but it's up to the player,'" Marchand said. "I didn't want to miss time. We finished earlier than we had planned to, so that bought me a few more weeks."

His goal was to play as long as possible, so he decided getting the surgery was a good idea.

Then another decision: Surgery on one hip or both hips? Marchand asked his doctor if they only did one hip, could they guarantee he wouldn't have to get the other hip done in a few years?

Marchand didn't want to have to go through this process again at age 36 or 37.

Once the doctor said no, Marchand decided a double hip arthroscopy and labral repair was his best option.

"One of the first things the doctor told me after [surgery] was, 'You're lucky you did both, because you would've been done in a year or two," Marchand said. "Because at that point I would've needed a whole hip replacement and my career would've been over."

Then the doctor told Marchand something he didn't want to hear: The recovery timeline was six months. He would be sidelined until American Thanksgiving.

Marchand didn't like that outlook. So he found a way to change it.

"Personally, I feel like if you're told something, it's just a limitation that you're setting for yourself -- or in this case for my recovery," Marchand said. "Six months, that's a long time. And especially when I heard the breakdown for why I needed it. Unfortunately it was because I needed extra time to get back in shape. My instant thought was 'All right, how can we get this done sooner?'"

MARCHAND LEVELED WITH his medical team. "I said, 'We can do this one of two ways,'" he recalled. "You can help me where I'm doing it, and we make sure I don't get hurt. Or I'm just going to do it behind your back, because I'm going to do what I feel I need to do to get back early, and I'll probably injure myself because I don't know what I should be doing, and I'm going to do it anyway."

Everyone agreed to circle the last week of October on the calendar, roughly five weeks ahead of schedule.

The first part of the rehab process involved rest.

"We had a newborn at home, and I felt worse for my wife than myself," Marchand said. "I was fine, all I had to do was lay on my couch."

Then, Marchand returned home to Halifax. He hadn't been able to spend time at home over the past two summers amid the COVID-19 pandemic and wanted the chance to see family.

Marchand's trainer in Halifax (Matt MacIntyre) and Boston (Scott Waugh) stayed in constant communication. "Everyone was on the same page," he said. "Which was important."

Marchand flew back to Boston every 7-10 days to get checked out.

He wasn't cleared to skate until October, which was the hardest part. For most of the summer, he also couldn't lift anything heavier than 20 pounds, so rehab included a lot of stretching and body weight exercises.

"I have a lot of anxiety every summer about my routine, when I'm skating," Marchand said. "It was very tough to put that aside and accept the fact I can't do it."

But he focused on what he could do. To keep his conditioning up, that meant biking.

"I needed to hammer bike rides, so I said give me bike rides where I'm not going to injure myself," Marchand said. "I started doing two bike rides a day, one at morning one at night, about a month before I was supposed to."

Marchand agreed with the medical team: If he was feeling sore, he'd take days off. But that happened only a few times.

And by the time he returned to Boston ahead of the season, he was right on track with that late October return.

For Marchand, it all stems back to his philosophy as a player.

"If you're not setting goals, and you're not putting things out there that you want to attain, then you're just being stagnant and there are people around you that will surpass you and work to be better than you," he said. "Even when you set goals, you want them to be realistic -- but you also want them to be realistic too, because if you're going to shoot for things you are going to achieve every year, you want to push it to the point where it might be out of reach, so you can push yourself to places you wouldn't have gone before."

Often Marchand's career has been framed around proving people wrong. He sees it differently: He's constantly proving himself right.

At 34, he credits his success to his work on the "mental side of the game" -- something he devotes more time to as the years go on.

"I don't think people realize how big that is -- how you can change your game and your confidence and perspective of who you are as a player and where you can end up," he said. "The more work I put into that, the more I realized what I could accomplish in the league."