We've seen a lot of great playoff performances in the NHL over the years, haven't we? Iconic moments. And we're not just talking about scoring a key goal or making a key save, although those are important. We're talking about players who stood tallest when it mattered the most.

As part of a project involving the four major sports, we enlisted a panel of our ESPN experts -- Scott Burnside, Craig Custance and Pierre LeBrun -- to vote on the top 25 postseason performances in NHL history. The result is the list below.

Did we miss any games? Which are ranked too low or too high? Take a look at our rankings and let us know.

Let's start this list (or finish, depending on your perspective) with an "Aw, isn't that nice?" moment. On May 10, 1998, the otherwise pesky Matthew Barnaby scored a hat trick on Mother's Day for the Sabres with his mom in the stands. (Barnaby had seven career playoff goals.)

Newsy Lalonde made a little news himself, scoring five goals for the Canadiens in a win over the Senators. The Canadiens would go on to beat the Senators for the Cup, largely on the strength of Lalonde's 11 goals.

The Devils' talented Patrik Sundstrom popped in an impressive hat trick and five assists on April 22, 1988, for a record point total that has not been surpassed but was tied by none other than Mario Lemieux in 1989.

After being left out of the Flames' lineup for the third, fourth and fifth games of the series, Lanny McDonald was given a chance to play in Game 6 by coach Terry Crisp. McDonald joined Hakan Loob and Joe Nieuwendyk in a three-on-one rush after serving a penalty. Streaking up the right side of the ice, McDonald went top shelf on Patrick Roy as the Flames won their first and only Stanley Cup.

Someone had to set up Rocket Richard, right? That was Toe Blake in Richard's historic five-goal performance March 23, 1944, at the Forum.

He's now much-maligned for his playoff play, so it's easy to forget Roberto Luongo made his career playoff debut with a spectacular 72-save, four-overtime win over the Stars. It was the most shots a goaltender had faced in a single game in the modern era.

The otherwise unheralded Mikko Leinonen recorded six assists April 8, 1982, at Madison Square Garden, a playoff record he shares with none other than Wayne Gretzky.

18. Oilers C Wayne Gretzky vs. the Canadiens
1981 preliminary round, Game 1

In what was a loud and clear announcement that the new kids were in town, Wayne Gretzky had five assists as the upstart Oilers doubled the Canadiens at the Forum to open the 1981 playoffs.

On April 25, 1989, while playing in his first playoffs, Mario Lemieux had five goals and three assists to lead the Penguins over the state-rival Flyers. Lemieux scored four goals in the first period and added three assists in the second plus an empty-net goal in the third.

In one for the ages, on April 27, 1994, Dominik Hasek denied 70 Devils shots in a quadruple-overtime shutout performance, the third-longest scoreless OT game in NHL playoff history. It's also the most saves a goalie has made in one game without allowing a goal.

Pesky rookie Brad Marchand made it look easy with his two goals and one assist in Game 7 to give the Bruins their first Cup win in almost 40 years.

On April 18-19, 1987 -- yes, that date range is correct, since this game started on a Saturday and ended on a Sunday -- Kelly Hrudey set a postseason record for saves in a Game 7 thriller that came to be known as the "Easter Epic." The performance helped the Isles win the longest Game 7 in NHL history.

One of the more unappreciated superstars of his era, Darryl Sittler scored five goals against the Broad Street Bullies on April 22, 1976, at Maple Leafs Gardens. For good measure, he added an assist, giving him six points on his team's eight goals.

On April 11, 1971, Bobby Orr became the first defenseman since 1922 to score a hat trick in a Stanley Cup playoff game, in a win over the Canadiens at the Forum.

On May 6, 2000, Keith Primeau scored to end the third-longest game in NHL playoff history in the fifth overtime to beat the Penguins. Primeau's wrist shot beat Penguins goaltender Ron Tugnutt, who posted his own great performance by stopping 70 shots. Primeau entered the game with seven goals in 78 career playoff games.

On April 10, 1949, Sid Smith became the only player to score three power-play goals in one Stanley Cup finals game as the Maple Leafs defeated the Wings in Game 2. The Leafs would go on to sweep the finals for a record third straight Cup.

In the longest game in NHL history, goaltender Normie Smith stood tall against the defending Stanley Cup champion Montreal Maroons, shutting the door over 176 minutes. The Wings would eventually go on to win their first Stanley Cup. 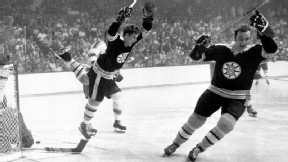 This performance is more iconic than record-shattering, but who could ignore the famous Bobby Orr-flying-through-the-air overtime goal against the St. Louis Blues? The famous photo aside, Orr's goal helped give the Bruins their first Stanley Cup win since 1941. Noel Picard, you're not off the hook for tripping, by the way.

Most visiting players who grew up in Canada picked their games up a notch when they played in storied Maple Leaf Gardens. And none other than Wayne Gretzky -- who was from nearby Brantford, Ontario -- proved that repeatedly, particularly on May 29, 1993, when he scored a hat trick against Leafs in front of his dad, who had suffered a stroke earlier in the season, to lead the Kings to a 5-4 win in a key Game 7 to advance to the Cup finals. Gretzky had a record 10 playoff hat tricks, but this was his only one as a King. Now that's responding to pressure.

Although it wasn't exactly a record-breaking performance, the efforts of Toronto's Bob Baun in Game 6 of the 1964 Cup finals between the Leafs and Red Wings deserve recognition. At the halfway point of the third period, with the Leafs desperate to force Game 7, Baun slid to the ice, blocking a Gordie Howe shot with his ankle. After being taken off the ice on a stretcher, Baun had the ankle tightly taped -- but refused to have it examined by doctors -- and returned to the game. In overtime, Baun grabbed a clearing attempt and fired a shot that deflected over Terry Sawchuk to give the Leafs a chance to win the Cup. Again with a tightly wrapped ankle, Baun suited up for Game 7, which the Leafs won 4-0. After the game, he found out he had been playing with a broken ankle.

Rookie netminder Patrick Roy's monster performance while stoning the Rangers with a series of stunning saves -- 13 in a row, at one point -- in overtime helped push his Cinderella Canadiens to yet another extra-time victory. The Habs beat the Rangers in five and then did the same to the Flames in the Cup finals, largely due to the work of Conn Smythe winner Roy.

It is more commonly known as the Marty McSorley Illegal Stick Game, but that incident overshadows the clutch performance of Canadiens defenseman Eric Desjardins, who scored two in regulation -- including the tying goal with 1:13 remaining, while McSorley was sitting in the box for getting caught with an illegal stick -- and the winner 51 seconds into OT to knot the series at one game each. The Kings would never recover, and the Habs, led by the play of growing legend Patrick Roy, would go on to win their 24th Stanley Cup. It was Desjardins' only pro hat trick.

Maurice "Rocket" Richard's performance against the hated Leafs on March 23, 1944, stands out among almost all other postseason NHL performances. With his team down 1-0 in the series, Richard scored a hat trick in the second period and two more goals in the third before he was rested, with the game well in hand, by coach Dick Irvin. Richard was awarded all three stars after the game. The Habs swept the rest of the series and the finals against the Blackhawks, giving credibility to the theory that Richard's performance helped propel his team to a dominant Cup victory.

Mark Messier, love him or don't, is one of the most confident and accomplished captains in NHL history. He solved the Stanley Cup trick five times with the Oilers, but it is his performance in the conference finals against the cross-river-rival Devils that earns him the accolades here. All he did was pull a Joe Namath and guarantee, with his team down 3-2 in the series and heading to New Jersey, that his team would beat the Devils. "We're going to go in and win Game 6," he told reporters. And then, all he did to back that up was score a hat trick to lead his Rangers to a 4-2 win. The Rangers then dusted the Devils in double OT in Game 7 and went on to beat the Canucks in seven games in the finals -- on Messier's Game 7 winner -- to claim their first Stanley Cup in 54 years. When you make that kind of a statement in that kind of a situation in that kind of a pressure cooker and refuse to lose, you deserve the top ranking. After all, it's not bragging if you've done it, right?