Dallas Stars center Tyler Seguin spoke with reporter Morty Ain about what it was like to take it all off for ESPN The Magazine's Body Issue, his size 13 feet, and why he'll never have a lucky stick.

I'm anti-superstitious. That's what I call it. If I have a good game, the next game I'll make sure I do something different. If I tape my stick one way and then go out and get a hat trick, the next day I'm going to tape my stick a different way. I always want to tell myself "it's not because of that" why I had a good game. I can change everything and leave it all on me. The superstitious guys on the team think I'm a weird bird.

In Boston, they'd joke that my name was Dumbo. I have pretty big ears. I never noticed it until I was 16 and I shaved my head. It was breast cancer awareness and we all dyed our hair pink and did mohawks, and I realized how much my ears popped out. Ever since then I've tried to keep hair on my head so I don't have to look at those things.

And I don't have too much chest hair. Maybe that will come soon?

I was prepared to take the safe route by going to college and fighting my way into the NHL as a smaller guy. It wasn't until one four-month period over the summer when I all of a sudden spurted up -- I was probably 15 or 16; I grew like five or six inches easily that summer, easily. I went from being this good player to being ranked first or second in the NHL draft for the world rankings. That's when I grew into my body and realized I was one of the top players in my class. The following year I was in Boston, and we won the Stanley Cup. It was pretty surreal. 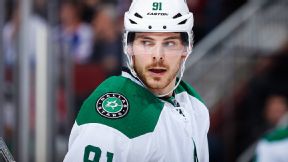 I've had size 13 feet since I was 13 years old. I wasn't a tall kid, but I've always had massive feet and big hands. I did feel a little clownish, especially as a kid. Keeping a good pair of sneakers was a problem. But it was actually a good problem for hockey; I've always been a good skater, and I can attribute some of that to having big feet since a really young age.

I lived about two streets over from where the bombs went off during the Boston Marathon. I was actually in the shower when it happened, and everything shook. All my friends were down there. My roommate was down there too; he said there was blood everywhere. It was a crazy day.

Ever since then, I've always thought it'd be pretty cool to run the Boston Marathon. That'd be the first thing I'd do when I'm done playing hockey.

I use my hips too much. That's a big thing in hockey, the hips. So I started doing Pilates two years ago. My team at the time wanted me to get hip surgery -- it's a common surgery for a lot of hockey players. I get private sessions in Toronto. I really enjoy it. It's a lot of activating my glutes and my thighs. With all the training on my hips and doing all the Pilates, I haven't had to do that surgery, knock on wood.

For a young guy, I have too many clicking joints. But that's just typical of being a professional athlete. We just get more banged up than your average person.

Gymnastics! That always seems to be one of the hardest workouts. We do it a few times a summer -- go to where a lot of the Canadian women train. We'll go through their warm-up, and it's almost a complete workout for us. The strength of those athletes is pretty incredible. Even just walking and trying to do spins on the balance beam ... it's tough.