TORONTO -- After the New Jersey Devils blanked the Anaheim Mighty Ducks in Game 7 of the the 2003 Stanley Cup finals, winning goalie Martin Brodeur met the media with a big grin, a bigger cigar and his good luck charm -- a toy Devils rubber duck. 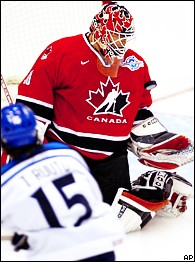 On Tuesday night, after backstopping Canada to a 3-2 victory over Finland in the World Cup title game at the Air Canada Centre, Brodeur again flashed a winner's smile. He went without the cigar and the duck.

"I couldn't find any Canadian duckies," said a laughing Brodeur, who was sporting a fair-sized, playoff-type growth on his chin.

Brodeur, clearly established as the best goaltender in the world, has become quite a good-luck charm himself. Since taking over for Curtis Joseph at the 2002 Olympics in Salt Lake City, Brodeur is unbeaten (9-0-1) in 10 international games. He won all five of his World Cup starts -- he missed Saturday's semifinal game against the Czech Republic due to an injury to his left wrist -- and led the tournament with a 1.00 goals-against average and a .961 save percentage.

Clearly, Brodeur's presence in the crease provides a shot of confidence, even for the fabulous collection of all-stars found in Canada's locker room.

"He squelches the fear within the team," head coach Pat Quinn said. "We all have some fear and if it gets a hold of you it can kill you.

"With great goalies like Martin Brodeur, there's no way of measuring what they bring to the team. But you can see it and the players in the room definitely feel it."

In the days leading up to the final, Brodeur's injured catching hand was the topic of debate. That debate ended a just a minute after Canada took a quick 1-0 lead on a Joe Sakic goal 52 seconds into the game, when Brodeur flashed the swagger that's made him a great big-game goalie. Finnish center Niko Kapanen came free with the puck in the slot and fired a sharp wrist shot at Brodeur. Calmly, Brodeur deflected puck to the corner.

Later, protecting a one-goal lead in the third period, Brodeur denied Finnish left wing Jere Lehtinen from in tight. That would be the last good scoring chance the Finns would generate on the evening.

He didn't, however, escape the game without getting a little reminder about his sore catching hand. With just four minutes remaining, Finnish defenseman Kimmo Timonen's blueline blast hit Brodeur in the heel of his glove -- the same place that Slovakia's Jaroslav Obsut drilled him with a similar shot last Wednesday.

"I felt that one," Brodeur said. "It's funny, two long shots in the same place."

Brodeur put aside the pain to finish out the game, adding a World Cup to his three Stanley Cups and Olympic gold medal. Mario Lemieux, a player who knows a thing or two about goalies, feels the secret to Brodeur's success is pretty simple.

"He has a great passion for the game," said Team Canada's captain. "He just loves to play. I've been trying to figure him out during the last couple of weeks. I think I learned a couple of things, but that's about it.

"He's a really smart goalie. That's half the game, to be able to be a step ahead of the opponent. He always knows where all the players on the ice are at all times. That's why he's the best."

At the other end of the rink, Finland's Miikka Kiprusoff came up a goal short for the second time in four months. The Flames stopper dropped a 2-1 decision to the Tampa Bay Lightning in Game 7 of the Cup final last June. Against Canada, he surrendered the soft goal you can never give up in a big game, allowing Scott Niedermayer's 20-foot wrister to slither through his five-hole.

Kiprusoff has shown he could challenge Brodeur's crown. But, for now, Canada's good-luck charm remains the game's best stopper.

EJ Hradek covers hockey for ESPN The Magazine. E-mail him at ej.hradek@espn3.com. Also, click here to send EJ a question for possible use on ESPNEWS.