Similar to the mission of the yacht America in 1851, one American boat is up against a field of 11 other teams from nine countries in a battle to win the America's Cup. The United States was dominant for 141 years, winning 28 out of 29 matches, but not any more. The U.S. has not reached the Cup final since 1995. 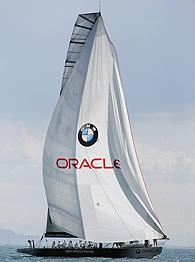 This year, Oracle CEO Larry Ellison is mounting a challenge and spending more money than anyone in the history of the Cup; that says a lot since former winners include JP Morgan, Harold Vanderbilt and Ted Turner, to name a few. Interestingly, the team that has spent the most money since 1970 has not been able to win.

Ellison is aware of this statistic and is running a powerful effort. My early prediction is his team, BMW Oracle Racing, will survive the grueling challenger trials for the Louis Vuitton Cup. Then, it gets difficult. The defender Allinghi is equally well funded and possibly better staffed, but that conclusion remains to be seen.

Allinghi's owner, 43-year-old billionaire Earnesto Berterelli of Switzerland, rewrote the established Cup protocol by recruiting a team of international superstars to design and sail his boat in 2003. In the past, most competitors were required to sail for their home countries. After dispatching the other challengers in 2003, including three from the U.S., he crushed the hometown heroes, Team New Zealand. Berterelli and Ellison are friendly competitors with a high respect for each other. If Ellison were to win, he says he will take the Cup to San Francisco Bay. I believe that will be a great home for the Cup.

Ellison seems to win in business. In yacht racing, he was by far the best in the ultra-competitive maxi class. In his first campaign, he finished second to Allinghi; rotating skippers (never a good thing in sailing) probably caused Ellison's downfall that year.

Bruce Farr from Annapolis, Ellison's designer, has had a storied career, winning everything except the America's Cup. This is his seventh attempt and Farr is hungry for a win. The BMW Oracle skipper is a seasoned New Zealander named Chris Dickson, who is one tough competitor. This is Dickson's fifth time as a skipper. Farr and Dickson have teamed up in the past and fallen short. I think if Dickson can keep calm, sail with his natural gift for making a boat go fast while letting Ellison handle the endless management details, this team could surprise Allinghi.

But first, Ellison has to get past a crowded field of challengers. In my view, only two will pose a problem: Emirates Team New Zealand and Italy's Luna Rosa. The NZ boat has American Terry Hutchinson calling the shots. The chief designer is Clay Oliver. Another rising star on board is Mark Mendleblatt, who sailed for the U.S. in the 2004 Athens Olympics. But the real question for NZ is their helmsman. Right now, Dean Barker is the designated driver, but he has a habit of losing in big events. Backing him up is Ben Ainsley from Great Britain, who has won two gold medals and a silver in the last three Olympics. No one in the world has come close to that achievement in the men's classes.

NZ's manager is Grant Dalton, who placed first or second in six different races around the world. He is a strong manager who will choose the best lineup. I think NZ and the U.S. will meet in the Louis Vuitton Cup final with BMW Oracle Racing advancing.

At this date, Allinghi is the favorite; after all, they are all ready in the Cup match.

What will set the tone for future America's Cups is how Allinghi will fare practicing on its own as the challengers spend the next two months racing and improving their boat speed and sailing skill. So far, Allinghi has shown she is the favorite by wining a two-year series of pre-Cup regattas called Louis Vuitton Acts.

Of course, no one knows exactly what will happen. And for that reason, the 32nd America's Cup season will be great fun to watch.

Gary Jobson is a sailing analyst for ESPN. He is a former collegiate sailor and was a tactician for the 1977 America's Cup-winning yacht Courageous.