VALENCIA, Spain -- The water was choppy and the boat
untested. The crew hadn't raced competitively since April.

None of that mattered for Alinghi on Saturday when the Swiss
yacht began its America's Cup defense with a 35-second victory over
Emirates Team New Zealand. 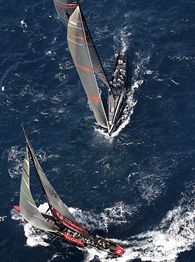 "It seems everything we wanted," Alinghi skipper Brad
Butterworth said.

Alinghi, racing in SUI100, will try to extend its lead Sunday
when the best-of-nine final resumes for the Auld Mug, the oldest
trophy in international sports. The America's Cup is named for its
first winner, America, in 1851.

The sport's showpiece event began Saturday with fireworks and
music and jet fighters screaming over the rival yachts. The boats
ventured past the Auld Mug -- perched over the water -- into moderate
wind, rough seas and a spectator fleet of about 800 boats.

New Zealand had won the right to challenge Alinghi by sweeping
Italy's Luna Rossa 5-0 in the challenger finals, setting up a
rematch after the team from landlocked Switzerland claimed the cup
from New Zealand in 2003.

Alinghi had not competed since early April because the defender
automatically qualifies for the cup final. The team, however,
trained regularly and did not appear rusty.

This was the sixth straight victory for Alinghi, dating to its
5-0 sweep of the Kiwis in 2003. Kiwi skipper Dean Barker said it
was no surprise the Swiss were quick in their new boat.

"They're fast and they sail well," Barker said. "They took
the first opportunity, got in front and controlled the race very
well from there."

Although the Kiwis won the start, Alinghi gained and rounded the
first marker 13 seconds ahead, building a lead of up to 160 yards
going downwind on the first leg.

New Zealand narrowed the gap to less than a boat length going
upwind on the second leg after starting a tacking duel, but the
Swiss were again faster over the final downwind beat.

"It was a great race," said Butterworth, adding that "the
boats seem to have much the same speed."

Alinghi was formed in 2000 by Swiss biotech billionaire Ernesto
Bertarelli who recruited a core of Kiwi sailors fresh from a
successful defense of the America's Cup for New Zealand.

Barker said the only significant change in the New Zealand yacht
NZL92 since the challenger finals was the swap of the lead bulb at
the bottom of the keel.

"The boat is going well," he said. "It is early days, but the
nice thing is that we feel competitive."

Butterworth, also a Kiwi, said his Swiss team was pleased with
its yacht, considering that "with the big waves it was difficult
to get the boat settled."

The Swiss 80-foot, carbon-fiber yacht appeared to bounce more
than NZL92 in the small but steep waves. Ian Burns, design team
coordinator for the ousted U.S. challenger BMW Oracle, said that
suggested there might be even more speed in the boat in calmer
waters.

"The most common tip is for Alinghi to be the fastest boat,"
Burns said. "This could be a sign of that."

However, Butterworth said his 17-man crew had made some mistakes
along the way and was not counting on just boat speed.