VALENCIA, Spain -- The landlocked Swiss are masters of the
ocean. 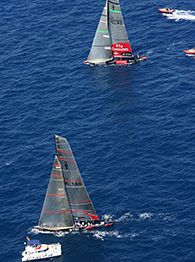 Swiss President Micheline Calmy-Rey congratulated the team,
sending a telegram that read: "We Swiss find our way at sea, not
just in the mountains."

The finish in the seventh race of the 32nd America's Cup was so
close that fans on both sides were beside themselves with joy, each
believing their team had won.

Alinghi won by one second, allowing the Swiss to beat New
Zealand in the first-to-five wins rematch that was four years in
the making.

"Aside from the birth of my children, [today] is the best day
of my life," Alinghi owner Ernesto Bertarelli said.

Alinghi took the Auld Mug trophy away from the sailing-proud
Kiwis by beating them 5-0 off Auckland in 2003, and brought it to
Europe for the first time in its more than 150-year history.

Bertarelli was the only Swiss aboard the winning boat. Born in
Italy, the biotech billionaire with an MBA from Harvard put
together a winning team made up of six Kiwis, three Americans, two
Italians, and one each from Canada, the Netherlands, Australia, and
Spain.