PITTSBURGH -- From the moment Mario Lemieux declined to take part in the orientation camp for Canada's Olympic hockey team in August, there has been a persistent buzz that he will decline to be a part of Canada's gold-medal defense in Turin in February.

Lemieux did nothing to dispel that notion on Monday when he said he thinks only the Canadian players who are playing well when the team is announced in late December should make the team, regardless of who the player is. 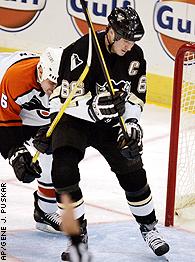 Lemieux also said he'd be happy to give up his Olympic roster spot for teammate and super rookie Sidney Crosby.

Overall, Lemieux appeared noncommittal on the issue of playing in the Olympics, saying he hadn't spoken to Team Canada executive director Wayne Gretzky or anyone at Hockey Canada about whether he would play.

But does he expect to be there?

"I'm not sure," said Lemieux, who captained the Canadians to their first hockey gold medal in 50 years in 2002.

More to the point, does he want to be there?

"Ah, you know, I think they have to look at who's playing well at the time and who can help the team the most, and it's still a little bit early to say anything in that regard," Lemieux said.

The Penguins' captain, who has already been inducted into the Hockey Hall of Fame, said he would "absolutely" withdraw his name from consideration if he wasn't playing well or he didn't feel physically like he could compete in the tournament.

"There's too many good young players now to take a spot just to take a spot because you're a name. That wouldn't be right for Team Canada or myself. Whoever's playing the best. As I said, we've got so many great young players now in Canada that can do the job," Lemieux, 40, said. "But if I am playing well and they want me there, I will be there for them, as well."

Whether Lemieux ends up in Turin or not, it is clear he views his participation in these games much differently than he did the 2002 Games.

After stunning the hockey world in December 2000 by returning from an early retirement brought on by his battle with Hodgkin's disease and chronic back ailments, Lemieux was named captain of the Canadian Olympic team in March 2001, almost a year before the Salt Lake City Olympics. That September, he attended an orientation camp held in Calgary to familiarize players with the Olympic experience.

But early in the 2001-02 season in a game against Anaheim, Lemieux suffered a hip injury and was limping as the Olympics approached. In an effort to save himself for the tournament, he limited his playing time.

"I couldn't skate. That's why I was taking games off," Lemieux said Monday. But he agreed that being able to take part in the Olympics dictated his pre-Olympic NHL schedule.

"Yeah. That was important for me to play in the Olympics and represent my country," Lemieux said. "That way I was giving myself the chance to go to Salt Lake and be a part of it."

Although he wasn't 100 percent in Salt Lake City, he played in five of six games, scoring twice and adding four assists. It was a watershed moment for the Canadians, but the tournament essentially ended Lemieux's season, opening him up to criticism from Penguins fans who watched their team plummet in the standings, finishing last in the Atlantic Division with 69 points.

"Salt Lake City, I knew that was probably the last time I was going to play," Lemieux said. "I came back in Pittsburgh and played, I think, one or two games. I knew that I was going to have surgery on the way back. Now, physically, I'm feeling a lot better."

Four years later, the dynamics have changed on many fronts for Lemieux, who remains a part owner of the Penguins.

Lemieux and the rest of the ownership group are seeking a license to operate slot machines to generate revenue to build a new arena. The team's lease with crumbling Mellon Arena ends at the end of next season, and if no new arena is in the offing, the team will move.

Generating and maintaining goodwill among fans is and will continue to be an important factor in the team's future, no doubt another issue factoring into Lemieux's Olympics decision. With the Penguins struggling, does Lemieux risk the fans' ire if he goes back to the Olympics?

On the ice, Lemieux is averaging a point per game through the Penguins' first 20 games on seven goals and 13 assists, although he boasts a whopping minus-14 rating, second worst on the team. Still, those numbers are a moot point when it comes to Lemieux's selection to the Canadian team. If Mario Lemieux were minus-155, he will be in Italy, if that's his desire. No one, not even Wayne Gretzky, is going to tell Mario Lemieux he's not good enough.

That said, if Lemieux doesn't want to go or feels he shouldn't go, Gretzky will certainly allow Lemieux to bow out gracefully.

Whether Lemieux is on the team or not, he said he thinks Crosby has earned strong consideration for a spot on his own.

"Yeah, absolutely, he's been one of the best players in the league so far, game in and game out," Lemieux said. "I think they should take a good look at him, especially if he's going to be a part of it in the future. It might be a good experience for him to be there and to see how it works. It might pay off in the future."