The U.S. Olympic track team still has one established shining star, not that you need to take anybody's word for it. Maurice Greene will be more than happy to tell you himself.

Quoting Greene: "Greatest of all time, what can I say?" 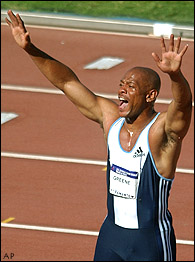 Well, maybe. Greene unquestionably is in the conversation of the finest sprinters ever produced by the United States for Olympic and global consumption and enrichment. His 47th career sub-10-second running in the 100 meters, achieved in winning Sunday's U.S. trials final in Sacramento, makes for the beginning of a fairly compelling case.

Of more than mere speed, though, Greene is a man of impeccable timing. In a 2004 pockmarked by just about every manner of bad news track and field can deliver, Greene's arrival as a gold-medal contender in Athens couldn't have come at a more welcome moment.

Greene will be 30 by the time he reaches Athens, and not everything old is new again. He's an older competitor in an older body, a body that broke down on him a few times between his gold-medal performance in Sydney in 2000 and today.

But Greene remains the Olympic standard-bearer for the United States at 100 meters, and that's the good news. The even better news, for track's governing officials, is that world record-holder Tim Montgomery isn't.

Montgomery's finals flameout at the trials was epic. On a day when the efforts of Greene (9.91), Justin Gatlin (9.92), Shawn Crawford (9.93) and Coby Miller (9.99) marked the first time in trials history that more than two men have finished under 10 seconds in the same race, Montgomery's 10.13 left him at seventh in the eight-man field.

He was never in the race, an occurrence that had to fulfill the dreams of USA Track and Field, the governing body for the sport. Now, the officials don't have to worry about Montgomery later being pulled off the team -- or worse, competing in Athens and then having his results nullified -- because of his part in the BALCO doping scandal.

It's the dominant theme in Sacramento: the scandal. It has enveloped the first three days of competition for all the obvious reasons. Montgomery, accused of doping and facing a lifetime ban, ran. Chryste Gaines, facing a lifetime ban, ran. The Harrisons, Alvin and Calvin, each facing his own banned-substance-related problem, appeared. Defending Olympic champion Marion Jones, the mother of Montgomery's child, failed to qualify in the 100 meters after a year in which she gave birth and dealt with the widespread rumors that she is complicit in the BALCO case as well.

Like Jones, Montgomery was defiant in defeat, essentially blaming his performance on the fact that he has had to deal with reporters every day for months because of the BALCO case. Closer to the truth, or at least the track, is the notion that Montgomery simply got blown off the course by the field in the 100.

And Greene led the pack, which is exactly as he, Greene, expected. He had G.O.A.T. tattooed on his arm to remind him of his drive to be, as he said Sunday, the greatest of all time. And he's good for it, at least from the standpoint of his physical readiness. At 29, with a birthday in less than two weeks, Greene looks nearly as good as he did during his runup to the 2000 Games.

Invincible? Hardly. Even Greene allowed, "I think my fear factor is gone," and both Gatlin and Crawford were quick to second that notion, albeit respectfully. Any one of those three could take gold in Greece and it'd be no major shock.

But it will be a deep surprise if Greene isn't right in the thick of things. And for a U.S. track contingent that has spent the past six months trying to convince the world it isn't one huge rolling cheat, Greene's presence is a solid reminder of the sprinters the country is still capable of producing without scandalous fallout.

Greene may have run faster in Sunday's semifinal than in the final. His time of 10.05 was run into a 2 meters-per-second headwind, which Greene calculated out to roughly a 9.8 with zero wind. The world record is 9.78 by Montgomery, subject to drug challenge, of course, with Greene holding the next fastest time at 9.79.

Naturally, Greene doesn't recognize Montgomery's time as legit. As of today, the rest of the U.S. Olympic track effort is free to dismiss Montgomery as a going concern as well. They've got Maurice Greene and the next generation of sprinters, Gatlin and Crawford, on the line in Athens. The timing is just about perfect.