For most of us, the biggest race of all, the Boston Marathon, blurs into a fog of old names and long ago glories. We can give you Bill Rodgers and Frank Shorter. Greta Waitz, too, I guess. 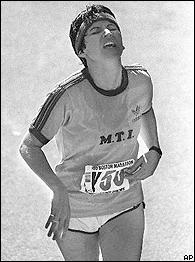 But Rosie Ruiz? We'll always love Rosie. Let's face it: She's the greatest thing to ever happen to that famous race in New England on Monday, and maybe, sports cheaters worldwide.

Rosie snuck out of the crowd with less than a mile left in the 1980 Boston Marathon, wearing a bulky shirt, an unfit body and a perspiration-less skin. She sprinted less than a mile to what was believed to be a world-record time of 2:31, a résumé-less runner looking at first like one of the great sports stories in history.

Ruiz is responsible for the greatest hoax in the history of sports, but odds are, it's the transgression that most of us have the toughest time getting too worked up over. Mostly, she made us roar, and most of all, she made us remember that name. Rosie Ruiz. The Boston Marathon is a prestigious race and all, and yet few of us remember one thing that's ever happened there except that artist making it eight days as champion until they could prove she was a fraud.

Everywhere else in sports, we have less and less tolerance for rule breakers because everything has turned so sophisticated and sinister. From designer steroids to agents trolling the high school playgrounds, cheating is a nastier business than ever. Let's just get something straight: On the 25th anniversary of Ruiz rouse, let's absolve her of consideration of first-ballot entry into the Cheaters Hall of Fame. After all, she made us laugh too hard.

Ben Johnson is a cheater. Jason Giambi, that's a cold-blooded hard-core cheater. The Big '80s at SMU? Now, there was some cheating. Gaylord Perry made the Baseball Hall of Fame on a spitball. First-ballot, all the way.

Rosie? She was someone else. Something else. This was closer to a sorority stunt gone awry than anything else. To think that you could slip out of the pack of people just past the 25th mile. It never should've worked, and odds are, Ruiz never believed it would work so well that it would take eight days before she was stripped of the marathon title in 1980. Twenty-five years later, everything from computer chips in runner's shoes to electronically monitored stops on the race course would never allow such an emboldened act to go so far.

Despite the fact that she was witnessed running out of the crowd and onto the course with less than a mile left, that she was seen nowhere at checkpoints, Ruiz has never stopped insisting she ran the race. If you're Jacqueline Gareau, the Canadian who lost out on her championship after beating Heartbreak Hill, well, it isn't so funny that Ruiz fooled everyone.

As the Boston Herald reports, there were a few more misunderstandings for Ruiz after the Boston Marathon in 1980. Let's see, there was an arrest for grand larceny and forgery for allegedly stealing tens of thousands from the real estate firm where she had worked (she served only a week in jail, instead receiving five years' probation). Oh, and there was a bust for trying to sell cocaine to undercover agents at the Miami Airport Marriott. Apparently, she spent 23 days in jail on the charge and was put on two years' probation. Even there, she couldn't make it the full 26.2.

Anyway, all that left Rosie a little short on a credible case that the world had it all wrong about her in 1980. Nobody believes Rosie Ruiz ever tried to win the race --- never mind set a world record --- but once they hustled her into the news conference for a bizarre string of non-answers and goofy diatribes, there was no turning back. One way or another, she was on her way into history. When we think of the greatest hoaxes in history, it's always that name that rolls of your tongue: Rosie Ruiz.

Twenty-five years ago, she tried something that never, ever should've worked. Somehow, it did. For eight days, she was the most amazing story the sport had ever seen. For 25 years, in all her resplendent dysfunction, Rosie Ruiz is still one of the best things to ever happen to the Boston Marathon. Never mind all the cheaters sports ever produced because it's less and less we ever find any comic relief in them.