ATLANTIC CITY, N.J. -- She was a great practice skater, but in competition, Alissa Czisny's elegant features often froze up and her jumps didn't get off the ground. The gleaming white sheet of ice might as well have been a black hole. 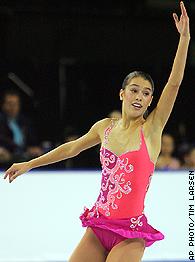 "She'd get that deer in the headlights thing," her other coach, Theresa McKendry, chimed in.

Berlin and McKendry finally decided the only way to get Czisny accustomed to facing the music was to play it as much as they could under simulated competitive conditions.

Twice a week, in two different rinks, the women round up any warm and willing bodies they can find -- office workers, contractors working in the building, parents of other skaters -- and ask them to serve as an impromptu studio audience. Many of them don't understand the fine points of what they're seeing, but they make a lot of noise, Berlin said.

Czisny dons her competition dress, glides out to center ice and feels the eyes of at least a small portion of the world on her.

"I told her that by the end of the season, that competition dress should feel like a rag," McKendry said.

Czisny hardly looked like a ragamuffin in the ladies' short program at Skate America Friday. Called in just a few days ago when ostensible headliner Sasha Cohen pulled out with a hip injury, Czisny took advantage and aced most of her program. She is in third place with 52.82 points, following Russia's Elena Sokolova (57.94) and Yoshie Onda of Japan (53.90), with the decisive free skate scheduled for Saturday night.

The 18-year-old Czisny said she's getting used to last-minute taps on the shoulder. She was invited to last year's Skate America, where she finished fourth, and this season's Campbell's Classic in St. Paul for the same reason. "Being called later, you don't have to think about it for as long," she said.

Yielding slots to her on a regular basis may not be a wise move for other U.S. skaters if her confidence continues to grow. The doe-eyed Czisny has overcome much of her shyness and she is not at all bashful about declaring her goal: "I want to make the Olympic team," she said. She even wore a Torino 2006 warm-up jacket to her press conference, a recent gift from her mother and a tangible reminder of her intentions.

Booking a trip to Italy won't be easy. Cohen and Kwan will be favored if they are healthy, and 16-year-old Kimmie Meissner has understandably attracted most of the promising newcomer buzz, especially after becoming only the second U.S. woman (the disgraced Tonya Harding was the first) to land a triple Axel in competition.

Yet Czisny doesn't seem fazed by the prospect of a heavy workload. Her bandaged fingers testify to the times she's sliced herself practicing one of the most impressive elements in her program -- an upright, balletic "Biellmann," in which she lifts her leg almost straight up behind her, stretches to grasp the blade with her hand and spins.

She's a sophomore international studies major on a full academic scholarship at Bowling Green and splits her training time between two rinks in suburban Detroit. Despite the demands on her time, she made the Dean's List last year, won the national collegiate skating title, finished seventh at the U.S. national championships and sixth at the junior worlds.

Friday, Czisny executed her opening triple Lutz-double loop combination jump but put her hand down on the triple flip. Her only other minor mistake came when she had to struggle to keep her balance on a spiral sequence while changing edges. "I was embarrassed about that -- it almost never happens," she said.

Her strengths -- flexibility, precision and stylish position on spins, spirals and footwork -- were apparent.

When the top three women were asked their opinions of the new scoring system that will be used in the Olympics, Czisny started to say she liked it only to be interrupted by Sokolova: "Of course," the 25-year-old Russian, who finished seventh in the 1998 Olympics, said teasingly. "Best spirals."

Those elements, as Czisny noted when she continued, "get more points now instead of just being checked off."

Czisny was the top U.S. finisher in a group trying hard to take advantage of the void left by Kwan and Cohen's absence. Beatrisa "Bebe" Liang fell on a triple flip and is fourth, more than five points behind Czisny. Emily Hughes had a somewhat rougher night, doubling a planned triple Lutz and falling on a double Axel. She is 8th out of 10 skaters.

But Hughes, who like Czisny was a replacement skater (for Kwan), said she's grateful to be feeling good again after a scary bout with viral meningitis that put her in the hospital for nearly a week in early August.

"I wasn't really thinking about skating at all," said Hughes, the younger sister of 2002 Olympic gold medalist Sarah Hughes, who said she now feels "almost at full strength."