In honor of this passing, I present the Six Most Obvious Differences between the new and old scoring methods. This pre-Olympic service is not meant to be a comprehensive guide. Breaking down all the criteria would make my math anxiety kick in, and besides, detailed explanations are already available at the U.S. Figure Skating Association's Web site (www.usfigureskating.org) or the International Skating Union's Web site (www.isu.org). 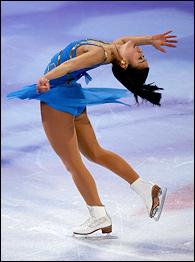 Those of you scoring at home may want to hire SAT tutors for assistance.

1) There's no more perfect six. In fact, there's no common standard of perfection, period. Each element of a particular skater's routine is assigned a point value, and bonus points can be awarded for "innovative" moves. Thus, Skater A's "perfect" might be a significantly different number than Skater B's. The lovely and lyrical 6.0 has been replaced by the more prosaic "personal best" and point totals eventually will lead to "world records," inching figure skating ever closer to track and field.

2) Skating order is no longer paramount. Remember the weird notion of "saving room" by deliberately keeping the first skater's scores lower so they could be topped by a better performance later on? That's allegedly history, as scores are not supposed to be relative to each other any more. It's refreshing to think that skaters might get numbers they deserve instead of a score meant to give someone else a chance. However, the fact is that those who draw later takeoff times will retain the edge of a warmed-up crowd, and more importantly, can still opt to reduce the difficulty of their routines if skaters ahead of them have stumbled.

3) Spins, spirals and footwork are a bigger deal. Formerly known as "the stuff between the jumps," each of these elements now has an assigned value and can help make or break a routine. The value rises in each of three levels of difficulty that are based on factors like number of rotations in a spin. It's literally dizzying. Oh, and there's still an artistic mark, sort of. It's made up of "program components" that include sub-categories like "transitions" and "interpretation" and sub-sub-categories that include "carriage," "flow and effortless glide," and "purpose," which includes sub-sub-sub-categories of "idea, concept, vision." Remember to breathe while contemplating this.

4) All résumés are created equal. Yup, that's right -- past performance is supposed to count for exactly nothing; each skater starts with a frozen tabula rasa. This requires a huge suspension of disbelief by skating fans accustomed to the often-denied but entrenched practice of "holding up" past champions out of sentiment or nationalistic bias. But there's some evidence that it is working, notably at the 2005 World Championships, where the men's podium was crowded with lesser-knowns. (For extra credit, name the medal winners and their countries. Answer below.)

5) Shield law now in effect for judges. Scoring will be anonymous. This not only eliminates the fun of sorting marks by current geopolitical alliances, but also protects the potentially off-base, unless they're snared in an ongoing evaluation process that allows four boo-boos before being named and sanctioned. Note: The U.S. Figure Skating Association wanted judges to be identified in international competitions, but lost that fight. However, judges' names will be linked to their scores at U.S. events, including national championships.

6) "Kiss and Cry" area renamed "Kiss and Calculus." Skaters and coaches are still required to sit for closeups while waiting for scores, flashing grim smiles and blotting their mascara. Their new post-skate ritual, however, is to leave elation or sorrow behind and rush to squint at the backstage TV screen that displays the stats, trying to figure out why the level assigned to a flying sitspin equals the square root of pi.

And if they're confused, what hope is there for us?

Bonnie DeSimone is a freelance writer and frequent contributor to ESPN.com.