The Olympic Games won't begin for about five weeks. But for Michelle Kwan, the gamesmanship has already begun.

The American skating icon is betting that she can be placed onto the U.S. Olympic team even though she announced Wednesday that she won't be making the trip to St. Louis to compete at the U.S. Figure Skating Championships --- an event she's dominated for much of the last decade. But it's a tricky wager since there is a fairly deep field of young Americans and Kwan hasn't won a world title since 2003. 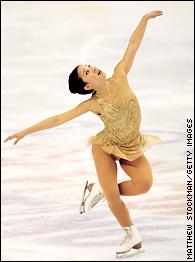 Kwan said she injured a groin muscle during a practice Dec. 17 and won't be able to train at a normal capacity until Jan. 16, two days after the competition ends in St. Louis. Kwan, who has not competed in a major skating event since placing fourth at the World Championships back in March, maintained, however, that she would be healthy enough to skate in the Olympics in Torino, Italy.

In fact, Kwan said she wouldn't just be ready to skate, but ready to claim a gold medal.

"I feel like I have a chance to win,'' said Kwan, 25, who has won virtually every title in skating except for the coveted Olympic gold.

The announcement caused great commotion within the skating community because it now throws its Olympic team selection process info flux. Prior to her withdrawing, Kwan was considered to have a virtual guaranteed ticket to Turin.

Should the sport's international committee -- a group of about 30 judges, coaches, officials and athletes which will select the team -- pick Kwan to go to Italy simply because she's been the most prominent player in her sport? Or should it pick the top three performers who compete in St. Louis?

There are several young guns waiting in the wings, some of whom were barely in kindergarten when Kwan made her senior debut at nationals in 1992. Newcomer Alissa Czisny, a student at Bowling Green, has had a breakthrough season with her first international victory. Emily Hughes, the younger sister of 2002 Olympic champion Sarah, also is in the running. So is 15-year-old Kimmie Meissner, who finished third at the 2005 national championships, but had to stay home for the World Championships because she was too young. Might she have to stay home again?

The only real "given'' to make the Olympic team is four-time national silver medalist Sasha Cohen. Barring any major problem involving her skating, she should be a lock.

The national champion is the only skater who automatically earns a trip to the Games. The other two spots generally are awarded to the silver and bronze medalists, but it is up to the international committee to select those skaters. In other words, it is possible to place 20th and qualify for the Olympic team, but it's not particularly likely.

When asked about the possibility of a skater earning a bye for the Olympics instead of competing at nationals, Cohen said, "Hopefully, we'll earn and deserve our spots.'' She added that it was probably "more fair" for the top three athletes to be on the team.

Oddly enough, it was none other than a 13-year-old Kwan who had to sit out of the Olympics in 1994, even though she qualified to compete in Lillehammer by finishing second at the national championships. That was the infamous year of the Tonya-Nancy-whack-on-the-knee scandal. Tonya Harding won nationals that year and was allowed to compete. Kerrigan was injured and was given a bye.

"It is sort of ironic that the last person bumped off the team was me,'' Kwan said. "But there is a rule for this.''

It's also a power play on Kwan's part. Not only has she become the sport's most visible face, but she also has already lined up major Olympics endorsement deals with Coca-Cola, Visa and East-West Bank. She is one of five major athletes who will be featured in Coca-Cola's commercials and beverage packaging leading up to the Games.

"We're pulling for Michelle and her decision to withdraw doesn't really affect us,'' said Susan McDermott, a Coca-Cola spokeswoman. "Our theme is 'Live Olympic' and as a two-time Olympic medalist and skating icon, we believe she's already exemplified that theme perfectly -- even if she doesn't compete this time."

Kwan was the favorite entering the 1998 Olympics in Nagano, but was upset by Tara Lipinski. Kwan decided to train another four years for the Olympics in Salt Lake City, but finished with the bronze. Sarah Hughes was the surprise gold medalist, followed by Russia's Irina Slutskaya.

It wouldn't be the first time the corporate world interfered with the team selection process. Back in 1998, Campbell's announced before the women's competition that three skaters -- Kwan, Lipinski and Nicole Bobek -- would appear on its soup can labels for the Nagano Olympics. All three ended up making the team, but critics wondered how much pre-selection was involved.

According to U.S. Figure Skating executive director David Raith, this year's Olympic team will be announced during a news conference following the women's long program and a meeting with the international committee, which will end late in the evening of Jan. 14. But the U.S. Olympic Committee has until Jan. 30 to turn in its final roster.

"It will be a very interesting meeting,'' Raith said.

Bonni Retzkin, who coaches Emily Hughes in Great Neck, N.Y., said the news about Kwan will not have much impact on them.

"It's still the same old story for us, the same old work,'' Retzkin said. "It really doesn't matter who's there or who's not. The only thing that matters is how Emily skates."

Should Kwan make the team, she will face some stiff competition. Slutskaya, a longtime Kwan competitor and the reigning world champion, has been the odds-on favorite to win in Italy. The Japanese team also will be strong, with Fumie Suguri, former world champion Shizuka Arakawa and teenager Miki Ando.

Kwan, who has been criticized for not having pushed the sport technically in recent years, did not land a clean triple jump in her only public showing this season, at a made-for-TV event last month in Boston.

The event marked a turning point for her, however, because she said it was an opportunity for her to skate in front of an audience again.

"I felt like I was on the right track,'' she said.

But then, she said she was set back with another injury.

While other women have been pushing the envelope with triple-triple combinations and even triple-triple-doubles (Japan's Mao Asada, who is too young to compete in the Olympics, landed two triple axels in one program), Kwan has not been attempting such difficult maneuvers. In her teleconference with reporters Wednesday, she eluded that she has upped the ante for this season, but did not offer any specifics.

She also mentioned that she has paid more attention to the new judging system. At the world championships in March, her program was not choreographed to meet the standards of the new system and she was downgraded severely. This season, she had international judges check out her routines.

Kwan, who hasn't lost at nationals since 1997, when Lipinski beat her in Nashville, said she plans to watch the event on TV from her home in Los Angeles.

"I'm very disappointed," Kwan said of not being able to compete at nationals. "But this is how it goes."

Kwan will try to get back on the ice and resume jumping. Should she be selected to compete on the Olympic team, she will have to be monitored by U.S. Figure Skating officials to make sure she is physically capable to compete.

"I believe that I will be 100 percent for the Olympics,'' Kwan said.

If she is not fully recovered, however, she said she will pull herself out of the running.

Should that happen, will the American public see Kwan compete again? She wouldn't answer any questions directly about retirement, saying that she's thought about it "a few times, but not enough to set me back."

She said she still loves to compete and her passion for the sport continues.

In other words, let her Games begin.

Amy Rosewater is a freelance writer based in Baltimore.