PHILADELPHIA -- Jeremy Bloom's world is completely flat now, a smooth expanse of grass or carpet that is the topographical opposite of the mountains studded with molehills he navigated as an Olympic-level freestyle skier.

The World Cup moguls circuit kicks off in the French Alps this month and fresh snow beckons in his native Colorado. But the 24-year-old Bloom has turned his back on airborne tricks and high-speed descents. For the first time since he began skiing at age 3, he's grounded.

Bloom admitted he might be more torn if he were living at altitude instead of the lowlands of the mid-Atlantic region. "I don't hear the Poconos calling my name," he said. 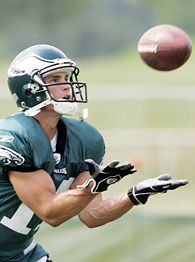 On days when his Philadelphia Eagles teammates are practicing outside, Bloom retreats into "the bubble," the team's indoor training facility. He straps a digital recorder around his arm, puts headphones on, and listens to his own voice, reading an entry from the Eagles' playbook. Then, he runs a wide receiver's route, alone. He envisions the big bodies hurtling around him and visualizes the ball settling into his hands. "I think about what my job is on the play," he said.

Eagles special teams coordinator John Harbaugh observed Bloom doing his solo work, but had no idea what he was listening to. "I thought there was music in that thing," Harbaugh said.

The audio drill was Bloom's idea, a creative way to stay in the game this season. The Eagles drafted the former University of Colorado wideout in the fifth round last spring and thought enough of his potential as a kick-return specialist and, perhaps, wide receiver to sign him to a three-year, $1.8 million deal. Bloom played in one exhibition game before he tweaked a hamstring and was placed on injured reserve, a way to keep him around and allow him to work his body into NFL shape.

Bloom calls this his "redshirt" year with conscious irony. The NCAA prevented him from playing football his last two years at Colorado, ruling that the endorsement income and gear he received from skiing violated eligibility rules.

His attempt to overturn that decision was lengthy, frustrating and ultimately unsuccessful, but at least he had a nice fallback position. In 2005, Bloom won six consecutive World Cup moguls events and the overall title. He competed on the U.S. freestyle ski team in two Olympics, finishing ninth in 2002 and sixth in 2006. His marquee good looks made him a crossover star in modeling and marketing.

That enjoyable ride didn't dull his anger at the NCAA, which rises in his eyes with a metallic glint when the subject is raised. The only benefit of his fight was the patience it forced him to cultivate. Bloom is somewhat used to being in limbo, and he is used to people being skeptical that he can or should try to do it all.

It's been a year of adjustment -- adjusting to being temporarily out of competition, to the different demands on his body, to being part of a team that is under the microscope every day instead of every four years. "I don't think I ever got booed in freestyle skiing," said Bloom, who heard the loud feedback at Lincoln Financial Field this season when the erratic Eagles failed to perform.

He can't practice with the team but uses the Eagles' workout facilities, attends team meetings and consults with coaches. Bloom also recruited high school buddy and teammate Chris Gebhardt, who played defensive back at the University of Northern Colorado, to come to Philadelphia to work with him.

The two logged intense two-hour sessions two or three times a week in the bubble. Gebhardt threw passes so Bloom could shadow the routes in the Eagles' playbook and then went into defensive mode to help Bloom practice coming off bump coverage.

"I showed him different looks, told him what defensive backs look for, when to make his break," Gebhardt said. "It was pretty physical. Not quite the competition he's going to see every Sunday next year, but I tried my best."

He marvels at his friend's focus. "I think there's one person in the world who could do this, and that's Jeremy," Gebhardt said.

"He's got all the skills to be a kick and punt returner in the NFL. He's a ball carrier. Runs really smooth and fluid, can change direction. He's got a burst of speed and his hands are getting better. The other thing is, he's so incredibly highly motivated. A lot of guys wouldn't have the attention span to do what he's doing this year."
-- Eagles special teams coordinator John Harbaugh on Bloom

Bloom has added 15 pounds to his 5-foot-9 frame (he weighs about 185 now) and has concentrated on developing the football-specific strength and balance he'll need to have a shot at playing next season.

Harbaugh thinks he will.

"He's got all the skills to be a kick and punt returner in the NFL," the coach said. "He's a ball carrier. Runs really smooth and fluid, can change direction. He's got a burst of speed and his hands are getting better. The other thing is, he's so incredibly highly motivated. A lot of guys wouldn't have the attention span to do what he's doing this year."

As a skier, Bloom kept his weight back to absorb the shock of going over moguls; in football, he's pushing forward. The agility he needs to make game-changing plays in football requires sturdy ankles to plant and cut; wearing ski boots, he said, was like "being in a cast" that kept that part of his legs immobilized and undeveloped.

"I underestimated how much work it was going to take to get my ankles and quads ready for football," Bloom said. "Mentally, I was ready. I'm ready right now. Physically, now, I'm much more ready to be on a football field. The window between the Olympics and training camp was just too short."

He still ran the 40-yard dash in 4.49 seconds at the NFL combine in late February, a heady five days after he flew back from the Torino Olympics. He thinks he'd be closer to his college time of 4.2 seconds now.

Bloom isn't limiting his vision to special teams -- he intends to play wide receiver and has conducted his own study of comparably compact players this fall. He spent hours breaking down film of the Carolina Panthers' Steve Smith, watching every touch the 5-foot-9 dynamo had last season, and also tracked the Washington Redskins' 5-foot-10 Santana Moss. Bloom's conclusion? Size matters less when it's coupled with not only speed but aggressiveness and craft.

"Steve's body control is what jumps out at me first," Bloom said. "He very, very rarely ever takes a big hit. He never is out of control. His routes are precise.

Bloom said Smith and Moss have "knocked down the door" for smaller players to be taken seriously at receiver, but added, "I have a long way to becoming anywhere close to as good as those guys."

Harbaugh doesn't rule it out. "It's a longer shot, but [Bloom] can definitely do it," he said. "Steve was strictly drafted as a return guy. People thought he had the skills to be a third or fourth receiver. Now, he's one of the best in the league. When you can carry the ball, you can carry the ball, and that translates into offense."

Bloom will go home to the Denver area when the Eagles' season ends and start counting the days until mini-camp. He'll be within striking distance of his beloved Rockies, but said he probably won't be tempted to take a recreational ski run.

There's no specific prohibition on skiing in Bloom's contract, just standard NFL contract language that says a player could forfeit all or part of his paycheck if he's hurt while participating in non-football activity "with a significant risk of personal injury." Some of his past adventures might qualify.

Last year, Bloom dropped from a helicopter into deep powder and skied around boulders and cliffs in the British Columbia backcountry for an appearance in "Higher Ground," the 2005 installment of the well-known Warren Miller snow sports film series. In this year's edition, "Off the Grid," Bloom is earthbound, providing narration as others play daredevil.

"I definitely miss it to an extent," Bloom said. "But the reason I won't is worth it."