MALIBU, Calif. -- There were closing arguments, but no closure this week in the Floyd Landis doping case.

Technically, the arbitration hearing was adjourned, not completed. Panel chairman Patrice Brunet requested written findings of fact from both sides. A ruling may not be issued for several weeks. That puts it right on schedule for maximum impact on the eve of the 2007 Tour de France, which begins July 7 in London.

Landis faces a minimum two-year suspension and loss of his Tour title if his positive test results are upheld. Either side can appeal.

Even as the Landis case wrapped up, the door to cycling's closet burst open and a cascade of confessions tumbled out. The most stunning was that of Denmark's Bjarne Riis, the 1996 Tour de France winner and the first member of that elite fraternity to come clean. The impact of that statement by Riis, owner and director of the much-decorated Team CSC, follows a month of revelations by other prominent cyclists and can't be overstated.

The gag order on the arbitrators, lawyers, expert witnesses, Landis and his spokesmen that applied during the hearing is supposed to extend until the final ruling comes out. Frankly, silence feels soothing right now for those trying to digest what just transpired in Malibu and Europe. 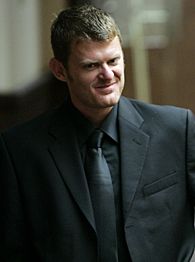 According to the Courtroom View Network Web site, which broadcast the hearing on streaming video, 58 hours, 15 minutes and 19 seconds of in-court time was spent trying to discern whether Landis' Stage 17 urine samples at last year's Tour tested positive for an elevated testosterone-to-epitestosterone ratio and the presence of synthetic testosterone.

That accounting is laid out in -- coincidentally -- 17 neat sessions over nine days. The list looks not unlike the results in a stage race. Journalists and observers pored over the testimony, procedural discussions and speech making each day in an effort to figure out who won. There were multiple attacks, some transitional stages and a couple of bunch sprints.

It would be easier on everyone if what came out of the hearing could be quantified somehow. But the only universally understood statistic in the Landis hearing was announced each morning, when Brunet told the lawyers representing Landis and the U.S. Anti-Doping Agency how many hours, to the fraction, they had left to present their evidence.

Otherwise, with all due respect to the arbitrators who sat through it in person and the chemistry whizzes who parsed it from afar, it's hard to see how anyone could really make a definitive decision about Landis' guilt or innocence given the complexity and sophistication of the scientific testimony.

Repetitive, debris-laden tides of sloping baselines, overlapping peaks, matrix interference, Delta Delta values, and endogenous reference compounds -- in French and English -- washed over the participants and the audience in the courtroom at the Pepperdine University School of Law.

To their credit, both sides tried to boil the issues down to the essentials a layperson could grasp. The expert witnesses were highly educated, experienced, apparently sincere and generally well-compensated for their time. One scientist who testified for USADA is in the midst of work funded by a $1.3 million grant from that agency. One scientist who testified for Landis insisted on being transported by private jet.

Yet all that was certain from the outside, after the evidence came in, was that there's practically nothing about a sports doping arbitration that requires any knowledge about sports. It's about law to some degree, but it's mostly about science, which is why the panel had its own expert advisor (Dr. Francesco Botre, scientific director of the World Anti-Doping Agency-accredited lab in Rome) silently taking notes throughout the hearing.

Having said that, and casting no aspersions on the three men who heard this case, it's reasonable to ask why there are only 38 people in the pool of arbitrators who hear sports doping cases in North America, many of whom come out of the Olympic sports world.

Did Landis, as he set out to do, score points against the anti-doping adjudication system as a whole? At the very least, his request for a public hearing laid out the process for people to judge, a service to those who take an interest in such things and an eye-opener for anyone who assumed it paralleled standard U.S. judicial practice.

Previously, an athlete would be charged. A little rhetoric would be floated in the press. Then the case would go underground for a number of months until Vatican-like puffs of smoke would appear in the form of a ruling posted on an official Web site.

The most compelling political commentary on the system came from a surprising source -- testimony elicited under cross-examination from Dr. Don Catlin, the longtime director of WADA-accredited laboratory at UCLA who retired to pursue independent research last March.

No one involved in the Landis case has invested more time in trying to catch cheating athletes than Catlin. He is a scholar, an implementer, a crusader. The UCLA lab is constantly referred to as "the gold standard" in the field. Few people could speak with more authority.

Catlin said the Chatenay-Malabry lab's positive test results correctly sank Landis because they met WADA criteria. But, under questioning from defense lawyer Maurice Suh, Catlin showed little enthusiasm for some of the lab's procedures and offered no resistance when Suh led him down the icy, twisting and interesting track of Zach Lund's case.

Lund, a skeleton racer, was barred from competing on the eve of the Torino Olympics because the hair-growing tonic he'd used for years contained a substance recently banned by WADA. In a rare exception to the status quo, USADA asked Catlin to testify for Lund at his final appeal. Catlin unsuccessfully argued that the substance in question wasn't the masking agent WADA made it out to be.

"I got beaten up pretty badly for that," Catlin recalled. He said he was approached by WADA brass before Lund's hearing and strongly encouraged not to testify.

Catlin's retelling of that story in the context of the Landis case cut both ways. It cast the doctor as an independent, highly ethical man who wouldn't have agreed to appear for USADA against Landis unless he believed the case was justified.

But it highlighted the hermetically sealed world of WADA labs, where scientific objectivity is subject to a loyalty oath of sorts. Directors of accredited labs are not allowed to testify for athletes. This see-no-evil rule would seem to significantly decrease the chances of rooting out bad labs, should they exist.

There are four possible outcomes in doping cases:

• An athlete is convicted on the basis of good lab work.

• An athlete is acquitted on the basis of good lab work.

• An athlete is acquitted on the basis of sloppy lab work.

• An athlete is convicted on the basis of sloppy lab work.

The last is the worst case scenario, and it's more likely to happen when professionals like Catlin are asked to keep negative opinions to themselves. In the real world, it would be the equivalent of a patient having a cholesterol test or a Pap smear or a strep culture or mammogram films reviewed by a physician who was restricted in what he could say.

Unions protect the rights of athletes in American professional leagues -- to a fault, some would argue. Olympic athletes whose fates are governed by WADA don't have a union. Instead, management does. The anti-doping agencies are the ones who keep their members in line.

One of the more interesting legacies of the Landis case will be whether it encourages or discourages other accused athletes from requesting public hearings.

The obvious bears restating. Not all cases, even high-profile ones, will be like this one. Landis not only asked to let the public in, he campaigned to overhaul the anti-doping infrastructure. That cause, which he and his camp portrayed as noble, had some meritorious aspects, but it also devolved at times into something undignified and vindictive.

USADA's choice to put three-time Tour winner Greg LeMond on its witness list was the first sign that the agency was poised to strike back after months of hitting the mute button. You want public? You got public.

LeMond's recounting of an allegedly incriminating phone conversation with Landis last August amounted to one man's word against another's and as such, seemed ripe to be undermined. Then Landis' business manager Will Geoghegan handed USADA a club by making an ugly phone call to LeMond, and USADA used it to batter Landis.

The Geoghegan interlude ranged far afield from the actual facts of Landis' case, and obviously it was not a weapon USADA knew it would have when the hearing began. USADA's lawyers could have chosen to bring this matter to the arbitrators in chambers and dealt with it in private. That would have spared everyone the theatrical scene of Geoghegan standing to be identified in the courtroom like a condemned man and Landis' legal team scrambling to react.

But Landis himself helped define the terms and the tone of the battle here. Angered by the inexcusable leaks of his test results and the premature verdicts rendered by sports and anti-doping officials, floundering to find explanations, and searching for a focus in his defense, he chose early on to merge the personal with the technical.

It was Landis who called LeMond to gripe about LeMond's comments to the press about him, even though he knew LeMond was a habitual accuser of other cyclists. It was Landis who posted his unfiltered views on Internet message boards and did not stop others around him, including Geoghegan, from doing the same.

Character issues will always hover over doping cases, even though there are probably jerks who race clean and nice guys who cave to temptation. USADA opted to offer the arbitrators a chance to judge Landis by the company he kept in addition to the hormones found in his urine. The agency's tactics can be questioned, or labeled a distraction, but to be fair, so can those Landis used.

The Geoghegan/LeMond incident is scrawled across the mural of this case like graffiti. It injected a tabloid tone into the hearing that could very well have a chilling effect on accused athletes contemplating their defense strategies in the future. It served as USADA's Miranda warning: Anything you say can and will be used against you right along with your body fluids.

However, there's probably a middle ground here. If an athlete has nothing to hide and few rash acts to account for, allowing the public to view lab documents and enabling people to sit in on a hearing seems unlikely to tilt the process against him.

The world media probably wouldn't storm the barricades to hear a case against a champion archer or badminton player or, for that matter, a skeleton racer. That's unfortunate. All of these cases are important when taken as a whole.

Whether Landis doped or didn't dope on the day of Stage 17, cycling's crisis will only continue to deepen as long as fans find themselves immersed in lab reports as much or more as they are riveted by the stamina, daredevilry and prowess of these athletes, so often framed by staggering scenery.

Watching a well-drilled team launch its sprinter to the front near the finish line, or seeing a climber pick exactly the right spot to attack on a mountain road, dropping his opponent as if he were flicking away a piece of lint, are beautiful visuals. But whether science or racing is foremost on any given day, it's getting harder and harder for everyone to know what they're looking at.