Very little has gone right in Floyd Landis' life since the day last July when he stood atop the Tour de France podium, with one notable exception.

Landis underwent surgery last September to replace his crumbling right hip, first damaged in a 2003 training crash, and to relieve chronic pain that limited his everyday activities. After six weeks on crutches and in rehab, he emerged able to walk and ride without discomfort. 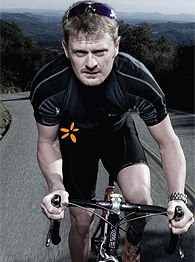 It's a corporate vote of confidence that could be considered risky given the fact that Landis is facing doping charges that may not be resolved for many months. But Brian Austin, general manager of the Metal-on-Metal division of Smith & Nephew, which developed the hip replacement technology, said the company examined Landis' circumstances and decided that using him would be both appropriate and advantageous.

"He tells his story just like a number of other patients," said Austin. "People are very excited, very intrigued to see his progress and return to high function. There's been no negative feedback at all."

Landis has been making daily appearances at Smith & Nephew's booth at the finish line of each stage of this week's Tour of California, sandwiched among tents where other companies hawk road bikes, apparel and nutritional products. Seated at a table and flanked by anatomical models of a hip, Landis posed for pictures and autographed posters, jerseys and plastic water bottles for a steady stream of fans.

Some seemed merely curious or starstruck, others intent on collecting as many autographed items as possible. One man went through the line in San Francisco three times, saying little as he handed items to Landis to sign. Another waited his turn wheeling a bike that sported a set of deer antlers mounted on the handlebars, clearly enjoying the stares he received.

Professor David K. Stotlar, who teaches at the University of Northern Colorado's Sports Marketing Research Institute, said not all corporate sponsors shun athletes in legal trouble, whether they're facing criminal charges or a doping arbitration.

"The damage that can be done to athletes and companies by these kinds of accusations is monumental," Stotlar said. "At that point, companies have to do a risk-benefit assessment. From a PR standpoint, they usually take the stand that people are innocent until proven guilty and they deserve the benefit of the doubt.

"It sounds like this company is looking for [Landis] to draw business as a human being whose pain was alleviated, not how many minutes of exposure their logo is going to get on a television screen."

Smith & Nephew has produced a brochure that features Landis on a two-page center photo spread, riding uphill dressed in a solid black outfit with a focused expression on his face. The promotional piece refers to Landis as the Tour de France champion -- which he is, officially, unless he is stripped of his title following his legal appeals. There is no mention of the pending case.

"I wish I had done it sooner," Landis said of the surgery in a testimonial accompanying the photo.

The brochure also features an elite triathlete and an amateur marathoner. Steve Miller, global director of sports marketing for Smith & Nephew, said the company wants to put athletic faces on its product to increase awareness of hip resurfacing among active patients in their 30s, 40s and 50s who may think the surgery isn't appropriate until they are older. The procedure has been available outside the United States for almost 10 years, but just received U.S. Food and Drug Administration approval last year.

Landis made an appearance on the company's behalf at a recent national orthopedic surgeons' conference, and also will speak to Smith & Nephew sales personnel, Austin said.

Neither Smith & Nephew officials nor Landis' spokesmen would reveal the terms of Landis' contract with the company. It is part of a patched-together financial life raft for Landis at a time when he -- unemployed and unable to compete professionally until the doping adjudication process is complete -- is treading water.

Will Geoghegan, Landis' business manager, estimated that Landis stood to make between $5 million and $8 million in contract bonuses and new endorsements based on his Tour win. But that windfall evaporated within days of Landis' victory when his positive test results were revealed.

Landis told ESPN.com last month he is spending more than $100,000 a month on his legal defense and expects the total bill to approach $2 million. He has few potential sources of income at the moment, although publishing giant Simon & Schuster paid Landis a six-figure advance for an authorized biography, "Positively False," scheduled for release in June.

Some of Landis' gear sponsors, such as Oakley (sunglasses) and Specialized (shoes), did not renew their contracts with him at the end of 2006. Others chose to stay connected, including Madison, Wis.-based Saris Cycling Group. The company, which makes a computerized power meter used by cyclists, as well as bike racks and other accessories, paid Landis to lead a third annual camp for amateur cyclists in Southern California in late January. Landis is a featured athlete on the Saris Web site and has appeared at events with dealers and traveled to the Saris factory to talk with the staff.

"There are a lot of reasons we stand behind Floyd," said Robb Zbierski, the company's fitness sales manager. "He's always done what he said he was going to do for us. It feels more like a personal relationship than a business relationship."

"We've broadened our proof points there," Cathcart said, referring to the number of different athletes the company uses in print and web advertising. "We don't have one dominant face. But here in the States, a lot of dealers have told us they've gotten positive feedback that we're flying the flag for Floyd.

"On the day the news broke, I got a call when we were driving to meet with our board of directors to discuss how we could leverage Floyd's Tour de France win. We had some agonizing talks over the next four weeks. It's been devastating for him and for us, personally and professionally. He's not racing, so we can't leverage his performance image, but we can get him in front of fans."

Swiss entrepreneur and former Phonak team owner Andy Rihs ended his business relationship with Landis last summer, but this week said he supports Landis personally and would offer him another job "immediately" if Landis is cleared of the doping charges.

Rihs invited Landis to a press event hosted by his new team, BMC, even though his bike manufacturing company of the same name no longer sponsors Landis. The two men sat next to each other on a dais and Rihs made a point of showing his affection for Landis, frequently making conversational asides and at one point wrapping his arm around his former team leader.

The revelation of Landis' positive test for testosterone days after his Tour win "was a big hammer that destroyed the team," said Rihs, whose Phonak squad had endured numerous other doping scandals. "But still, today, it's an open issue. There is no verdict. A case like this should be resolved quickly.

"I made it clear to Floyd that I cannot protect him [professionally]. But I hope he has the best lawyers. He's a great racer, a great person."